Once upon a time, the annual South Jersey Clayathon was held on MLK Weekend. So, this Saturday as I was preparing my TWiP post, I was seeing a bunch of Clayathon mentions in my “Today in Blog History” section. It got me in the mood for a little retrospective of sorts.

I should point out that my Clayathon recap posts have always been very me-centric. You get a healthy dose of what I’ve been up to, but I might as well have been there alone, because I rarely mention another person. That’s just the way I’ve always written. I’m not very good at looking up from my own little workspace. Still, I can assure you that there are always other people with me at these Clayathon events, and in fact, it wouldn’t be fun at all by myself! I’m just not very good at writing about that aspect of it.

But there are some attendees that are so good at spreading the love, spending time photographing everyone’s work and talking it up later on their blogs. Martha comes to mind right away as one such person, but there are often others. Perhaps if I were not so self-absorbed, I would remember who else posts great Clayathon recaps 🤣

Anyway, if you’d like to go down a very Lisa-Clarke-and-Only-Lisa-Clarke memory lane with me, read on.

NOTE: This post was originally written in January 2019, but I continue to add to it every year after another Clayathon ends, because I think it’s nice to have a historical record in one easy-to-find place. Enjoy! -Lisa 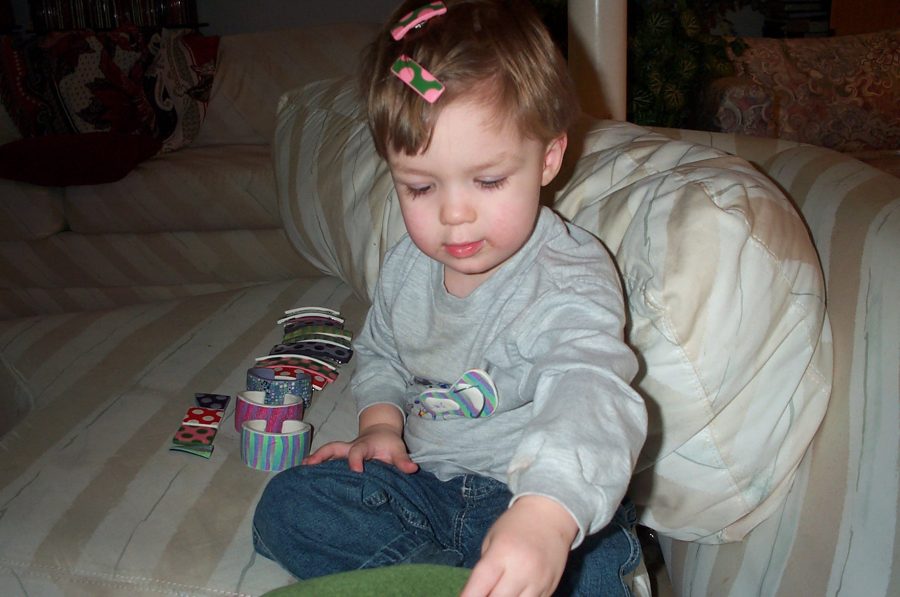 This was the first ever Clayathon, and it was awesome. There were probably about 20 of us, maybe less, and we took over a conference room in a friendly Days Inn outside Atlantic City. I tried a new polka dot technique and came up with an Ikat-like cane with embossing powder in it for speckles.

I only took two pictures at this event, and I took them with the camera on my Palm (ie, they were pretty terrible – this was before I blogged regularly, and before I got into photography). Everything I made fit nicely into the hat I’d been wearing, so when I came home, I gave my kids the hat to play with, and they had fun looking through all of the goodies I made. Those were the days, when the boys were little and actually enthusiastic about my return home. Now they’re teenagers and barely notice if I’m gone for a few days, LOL!

Sigh. Will you look at that boy of mine? I just want to squeeze those little cheeks. He wasn’t even 3. Now he’s almost 16. Where does the time go?

When it happened: January, MLK Weekend
Where it was: Days Inn, Egg Harbor Township
My recap: Just Some Chit-Chatty Stuff From Me 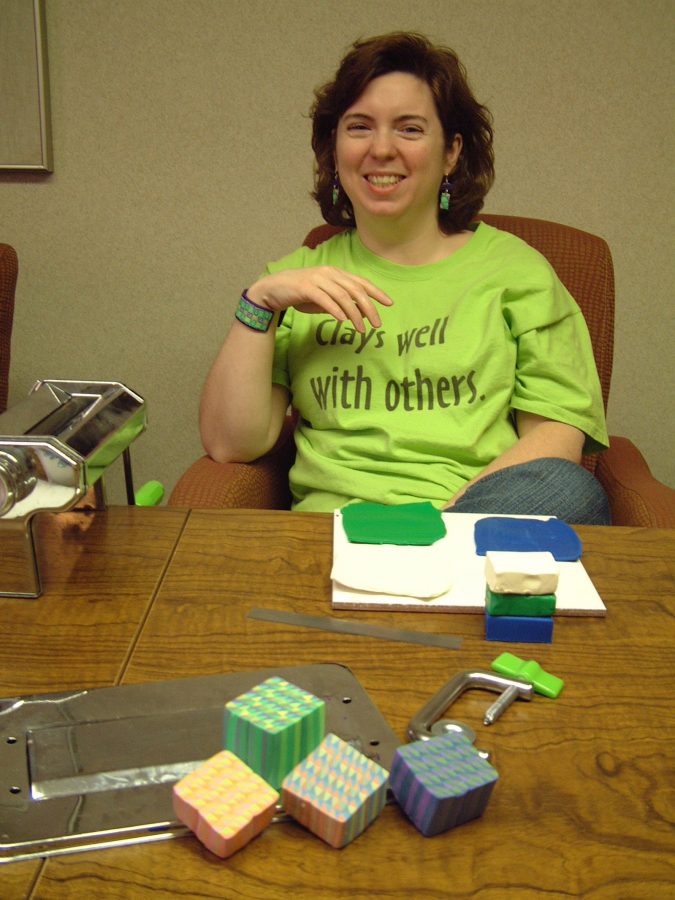 I started blogging in earnest in the spring of 2007, and this Clayathon predates that by a couple of months. So there’s no recap for this year, and it appears I also don’t have any photos. I checked. The only thing I remember about it is the bright green “Clays Well With Others” t-shirts, and that I demoed my Triangle Cane. And I know that because someone (Robin? Martha, maybe?) took this picture of it and shared it with me 😁

When it happened: January, MLK Weekend
Where it was: Days Inn, Egg Harbor Township 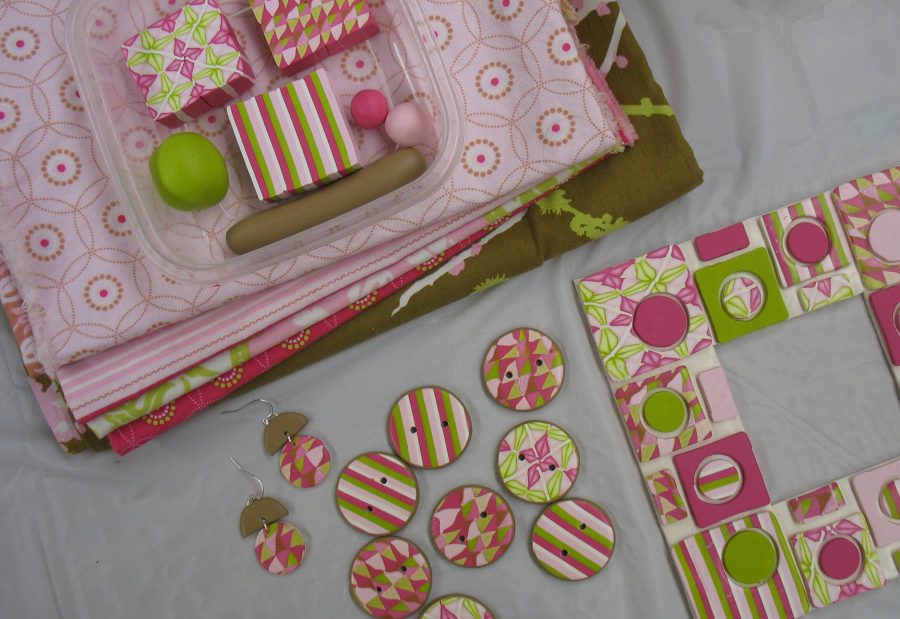 Ok, now we’re getting into my super chatty years of over-sharing, so there are plenty of Clayathon posts to read 🤣

In 2008, I was new to sewing, and I was enjoying it a lot. So most of my clay work involved making buttons and jewelry that coordinated with popular designer fabric collections.

When it happened: January, MLK Weekend
Where it was: Days Inn, Egg Harbor Township
My recaps: Reporting Live From the Clayathon, So sleeeeeeepy 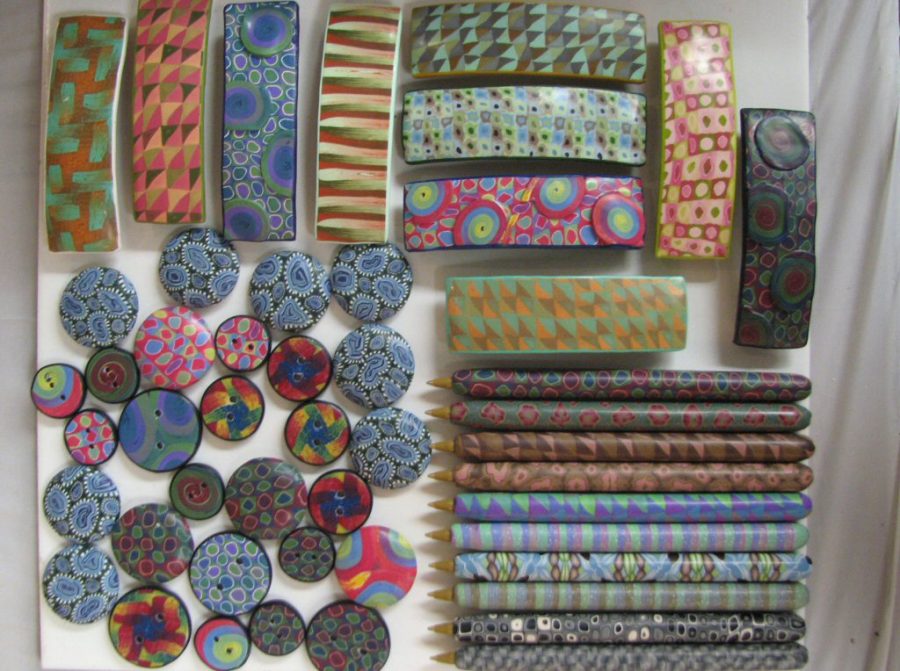 This year doesn’t really stand out for me. I made some canes, including a new “watercolor” design, and I cranked out more finished objects than anyone really has any business cranking out in a single weekend. But I do that a lot at this event. It’s kind of my Thing.

When it happened: January, MLK Weekend
Where it was: Days Inn, Egg Harbor Township
My recap: Half dead battery 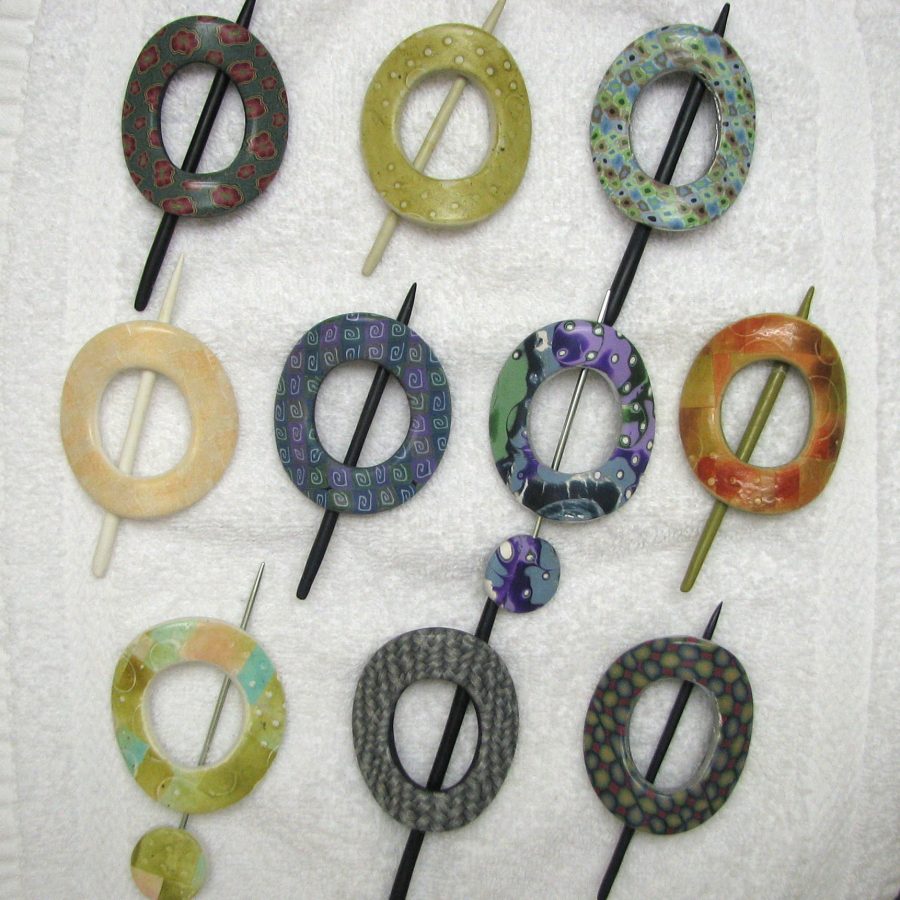 Two particularly cool things happened on this trip: I used a buffer for the first time (pure magic!) and I played with a technique that involved pastels, liquid clay, and texture, which is a departure from my usual millefiori work.

When it happened: January, MLK Weekend
Where it was: Days Inn, Egg Harbor Township
My recap: The shawl pins 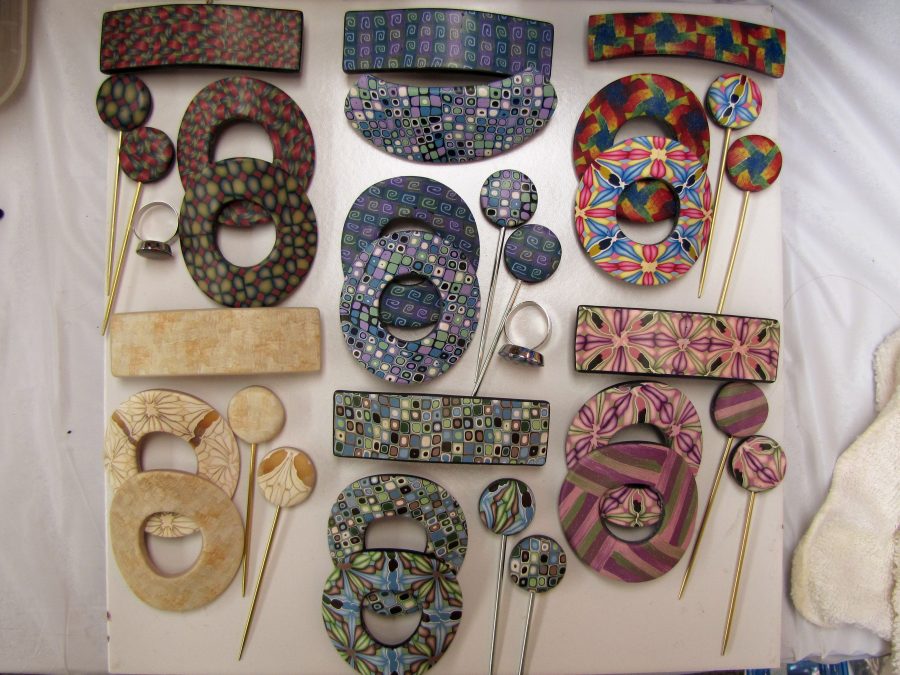 The Clayathon was growing in popularity at this point, but our space was still the same. The tables in the Days Inn conference room were so close together that we had to plan our bathroom breaks carefully. If you needed to get up, everyone between you and the door also needed to get up. It was an inconvenience to be sure, but it was intimate and fun just the same. And it clearly didn’t hurt my productivity any…

When it happened: January, MLK Weekend
Where it was: Days Inn, Egg Harbor Township
My recaps: Weave Cane, Sanded, buffed, and pooped. 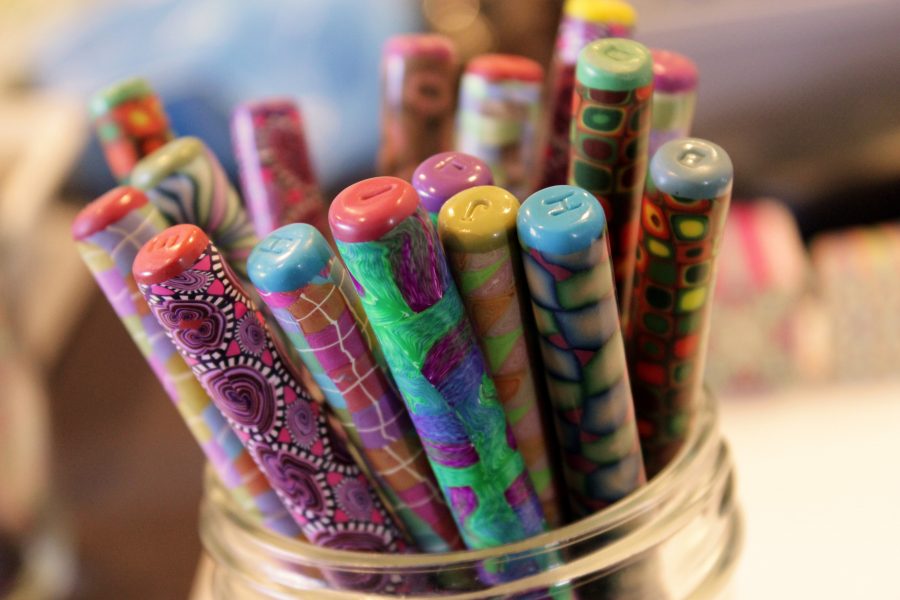 For 2012, the Days Inn needed our usual space for a different group, and, as I mentioned, we were getting too big anyway. So we moved to another hotel nearby. The workspace was so spacious in comparison. There was plenty of room to spread out, and I made a whole lot of pens and crochet hooks. The hotel was creepy, though. Old, worn down, and barely heated. One needs heat in the winter in New Jersey, so this was a problem. We never stayed in that place again.

When it happened: January, MLK Weekend
Where it was: Some terrible hotel that no longer exists
My recap: Clayathon recap 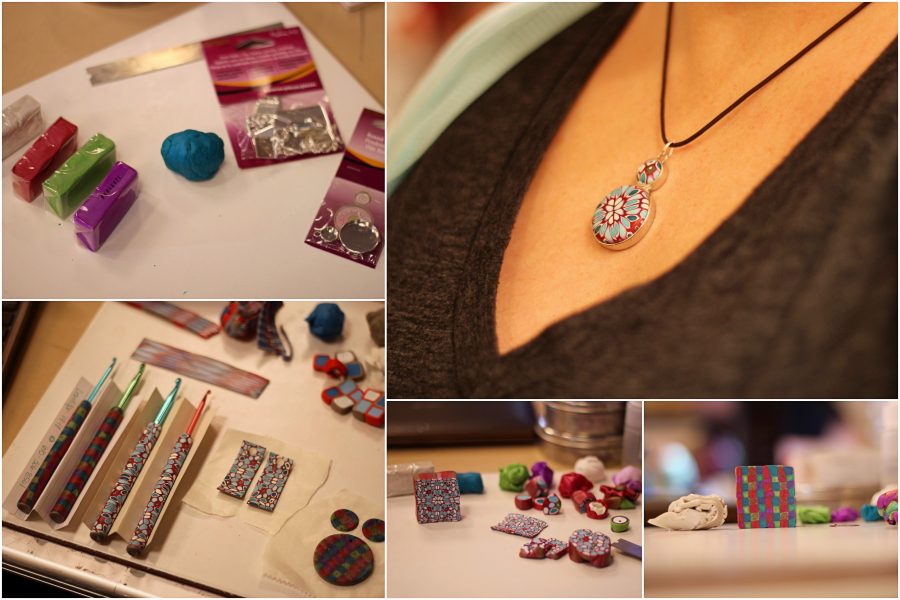 I am used to staying in low-frills types of hotels, and so I felt a little bit out of my depths when I pulled into the driveway of the Stockton Seaview. There were people to meet me at the door and bring my bags to my room. I had no idea how to tip them. It was all so much classier than I was used to. The lobby was beautiful. I had a nice, newly-renovated room.

Our workspace was less cavernous than at the previous hotel, but the service, the fact that we had heat, and the complete lack of creepiness made up for it in spades. I was as prolific as usual this time. I experimented with metallic clays, made a few canes, covered a few crochet hooks. It was nice.

When it happened: January, MLK Weekend
Where it was: Stockton Seaview Hotel, Galloway Township
My recaps: Fun with freebies, What do I mean by Millefiori Canes?

When it happened: February, President’s Day Weekend
Where it was: Stockton Seaview Hotel, Galloway Township

Second verse, same as the first.
When it happened: February, President’s Day Weekend
Where it was: Stockton Seaview Hotel, Galloway Township 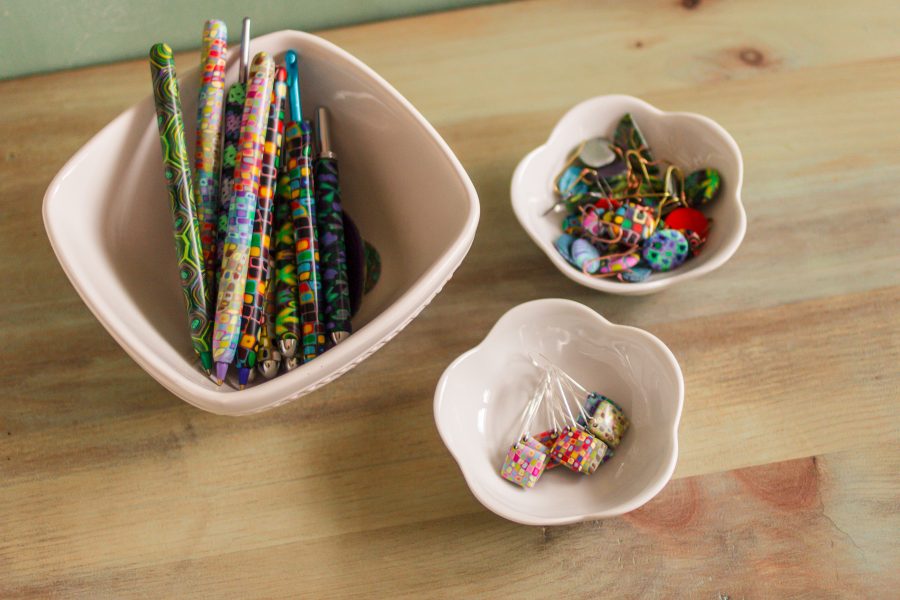 In 2016, Neil’s Boston event moved temporarily to a different weekend, and so I was free to come back to the Clayathon. Such happy news! I had a blast, and I decided that I was going to stop missing these events, even if they conflicted with Boston in the future.

I spent the first part of this time making canes, filling in some of the gaps in my color schemes, and then the second half I put the new cane designs on finished items. Retro Canes were popular for me this time, and I taught a few polymer newbies how to make them, too.

When it happened: February, President’s Day Weekend
Where it was: Stockton Seaview Hotel, Galloway Township
My recaps: TWiP: Clay and Yarn, Clayathon show-and-tell, plus a sale, TWiP: Polymerific 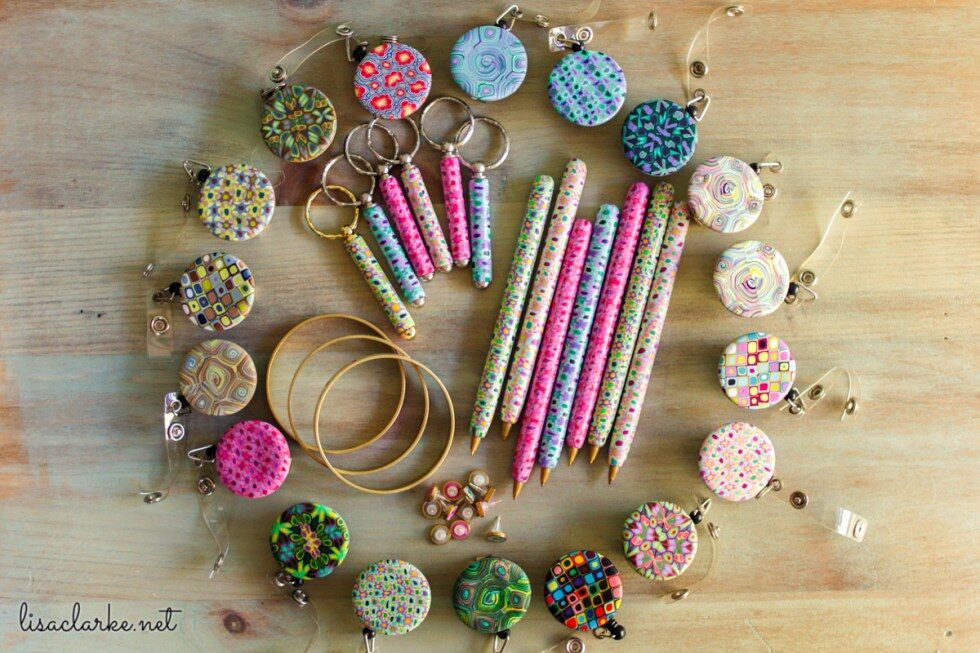 Neil’s Boston trip and my Clayathon conflicted again this year, but we decided to do both. He took Aidan to Boston with him, and Eamonn came to the Clayathon with me. Teenagers are perfectly happy to be left alone in a hotel room with their phones and their gaming devices anyway, so everybody won.

Claywise, my time was all about the tiny flowers. I wanted to resurrect an old design that I used to make 15 years earlier, but I wanted to do it in a simpler way. I ended up making Calico Canes in several different color families and applying them to everything in sight. It was also a big year for badge reels.

When it happened: February, President’s Day Weekend
Where it was: Stockton Seaview Hotel, Galloway Township
My recap: Clayathon Sale 💚💖💙💗 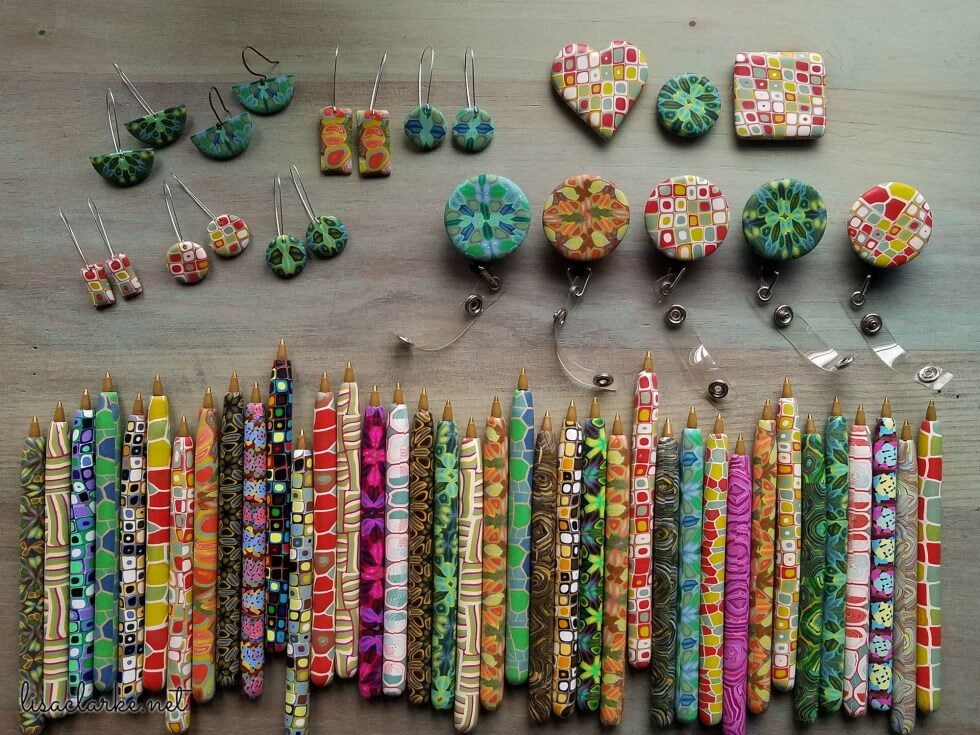 The thing that has always separated this event from some of the other polymer gatherings is the “do whatever you want” nature of it. Everyone brings their own favorite tools and materials, and then sets about making whatever they feel like making. While some demos are planned, and there’s usually a guest artist to learn from, the main event is just a creative free-for-all of spontaneity. It’s wonderful!

In 2018, we had over 100 participants. Formal classes were added to the schedule for those who wanted to take them, and there were polymer celebrities all over the place. I didn’t take any of the classes, as I had limited time off and limited funds, but I really didn’t mind. The unstructured artsy time is really what I’m after anyway, and I got just as much of that as usual.

I made about a million pens. 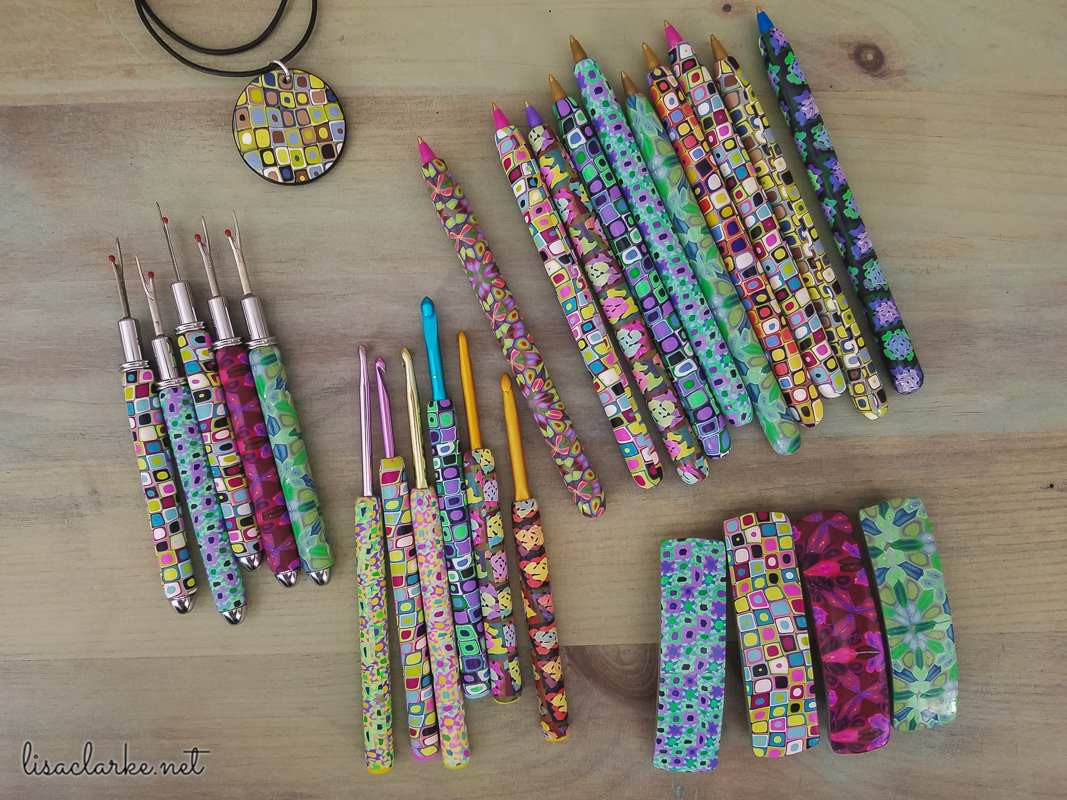 In 2019, the date temporarily moved to April. And I got a stomach bug that kept me home and took me out for the whole thing. I rallied on Monday and cranked out a few things at home, but it really wasn’t the same.

When it happened: The first week of April
Where it was: Stockton Seaview Hotel, Galloway Township
My recap, of sorts: TWiP: My Own Personal Clayathon 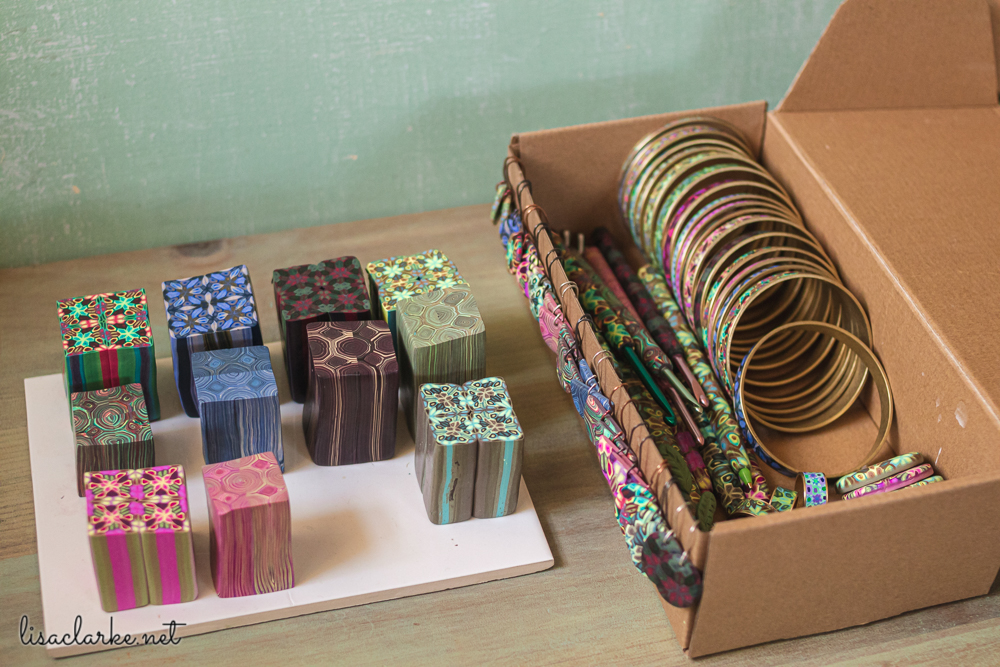 I’m happy to report there was nothing keeping me from the 2020 Clayathon. I made a bunch of Jubilee Canes in new color schemes, and applied them to the usual variety of things. Mostly, though, I was really into brass bracelets and rings. 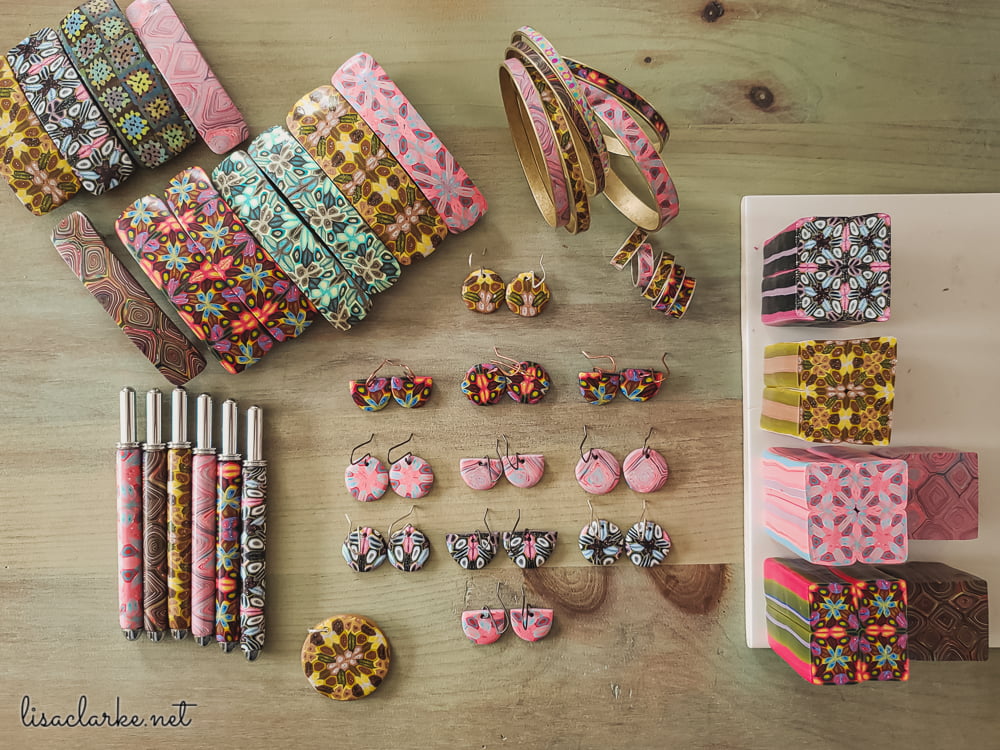 As we were still in the grips of a worldwide pandemic, Clayathon went virtual in 2021, and was conducted entirely over Zoom.

When it happened: February, President’s Day Weekend
Where it was: All over the world
My recaps: Virtual Clayathon 2021

8 thoughts on “Clayathon: a Retrospective”