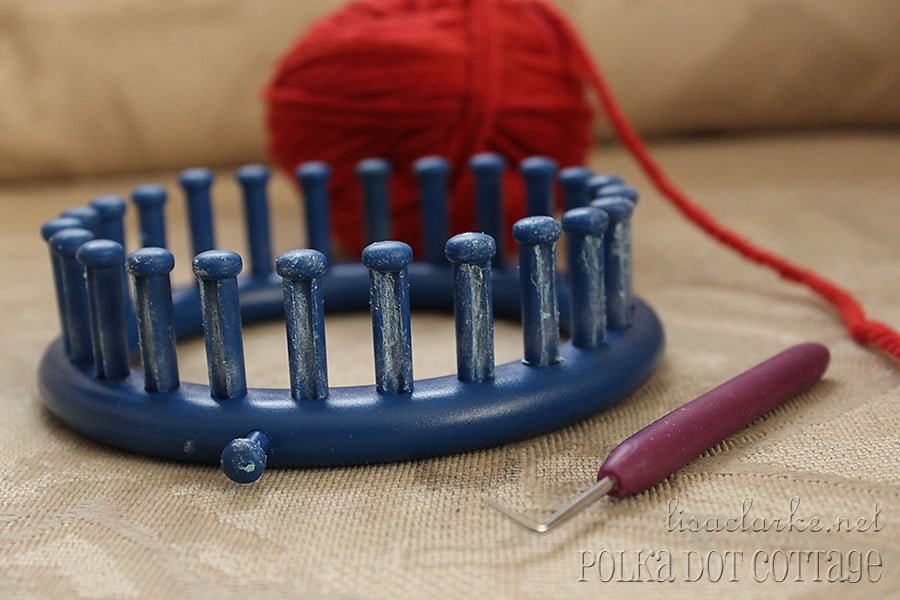 It’s been a while since we talked loom-knitting around here.  Ever since I got the hang of the needles, my knitting loom collection has been languishing in the basement.  There is one project, however, that has routinely seen me dust off the little blue knifty knitter and take it for a spin.

I’m going to give you a little back story, and then present this really great knitting loom pattern, followed by some images and descriptions that should help you to master the stitches, even if you are brand new to looming.  And finally, look for Episode 2 of the Polka Dot Cottage Video Blog at the end of the post. I’ll demonstrate the whole process and give you a few hints and tips, too.

This is a long post. Feel free to skip all of this chit-chat and just grab the pattern PDF.

See, back in the olden days of 2009, I was growing steadily more enamored with knitting, but I was entirely befuddled by needles, and only ever had any success when knitting on a loom.  I was dissatisfied with many of the patterns that were written especially for the loom – they looked cheap, un-stylish, and out-of-date – and so I began looking to traditional needle-knitting patterns for projects that were current, and ripe for “translating” to the loom. 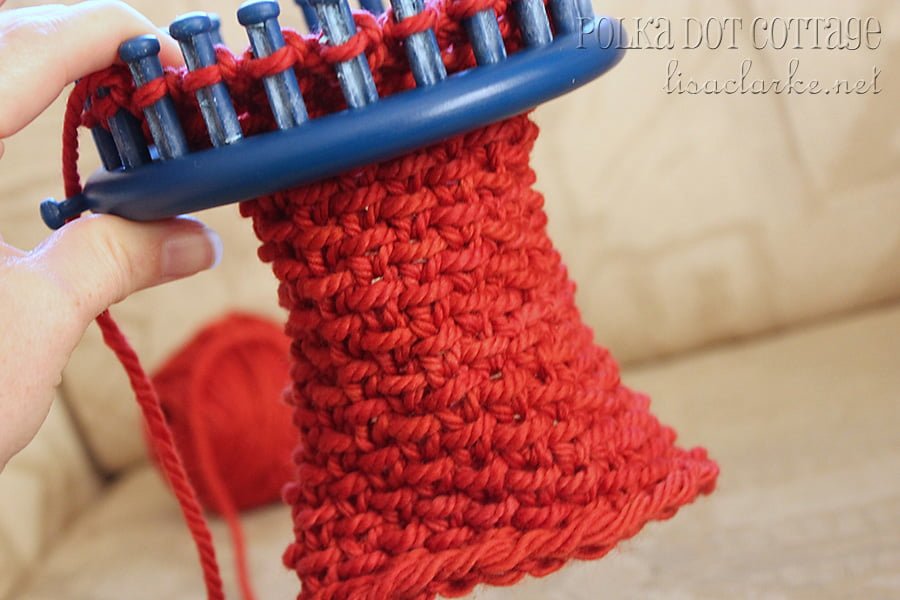 Knifty Knitters are comparable to needle sizes #10 – #13, depending on how tightly you tend to knit.  That means they work best with bulky yarn.  You can use them to knit in the round, or you can choose not to close the circle, and make a simple flat panel.  What this means is that you can generally do any bulky-yarn needle-knit rectangular pattern on a Knifty Knitter!

There are other patterns that also translate well, and other looms you can use too, but those are for another post, another day.

If you are unfamiliar with knitting looms, or if your experience is limited to the spool-knitting of your youth, you may not realize that knitting looms are capable of multiple stitches.  The most popular stitch is of course the knit stitch, which you achieve by pulling the lower loop over the upper loop and right on over the peg.  It’s an extremely simple stitch, and you could very easily churn out hundreds of bulky knit-stitch hats and get more than your money’s worth out of your loom.  But you’d be missing out on half of the fun. 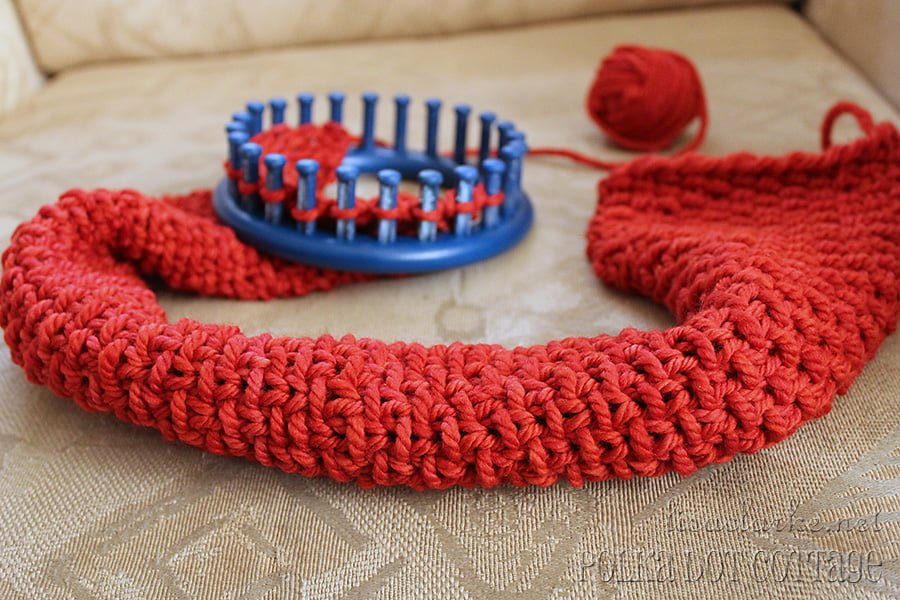 Yes, you can knit with a loom, but did you know you can also purl?  You can make cables and bobbles. You can even increase and decrease, although this poses some difficulty, in certain situations.

So, back to 2009.  I was a loom-knitter looking for a neckwarmer pattern that didn’t have that “I was knit on a loom using one boring stitch and cheap-ass yarn” aesthetic.  Ravelry lead me to Kim K’s Cashmere Neckwarmer pattern.  It was perfect:

I set to work translating the pattern for my own personal use on the loom, and since then I have made somewhere around a dozen of them in some form or another.  Even after learning to knit with needles, I still go back to the loom when I want to make one of these.

If you knit with needles, and would like to continue to do so, check out the original pattern here, and just make it as written.  My thanks to Kim, who cheerfully gave me the ok to share my loomy take on her pattern. 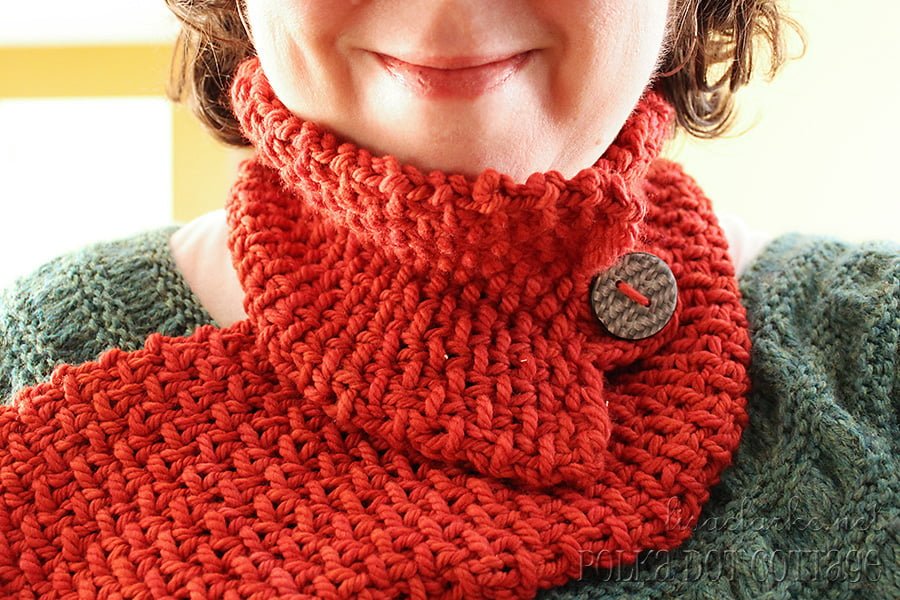 The original pattern calls for a ball of cashmere yarn, but I have made all of mine in Malabrigo Chunky and they are positively wonderful.  So soft and lovely on the neck, and not as pricey as cashmere.  I do recommend using nice yarn here.  It really makes all of the difference!  I made one in an acrylic blend once and it just wasn’t the same.

Not terribly important here, but 3 stitches and 3 rows is roughly 1 inch

See the directions below to learn the e-wrap cast-on, the knit stitch, the “slip 1 with yarn in front” stitch, the basic bind-off, and how to make an i-cord. 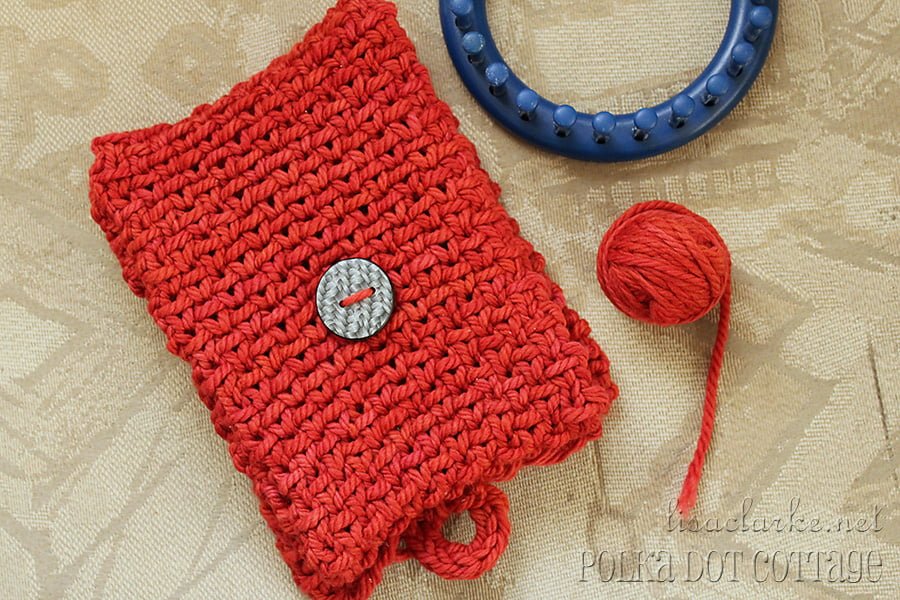 This pattern takes me at most two nights to knit in front of the TV!

Make a slip knot, and put the loop over the 1st peg.

Bring the working yarn in front of all of the pegs and hold it in place above the loops.  Use the knitting tool to pick up the loop on peg 15, pull it over the working yarn and completely over the peg. You will be left with one new loop on the peg.  Do the same for peg 14 and all remaining pegs.

You have now cast on fifteen stitches.

This is the simplest and most common of the stitches.

To slip a stitch, is to leave the loop on the peg and not knit it at all.  To slip it with yarn in front (or wyif), you will need to first use the knitting tool to remove the loop from the peg, slide the working yarn behind the peg but in front of the loop on your tool, and then place the loop back on the peg.

Move peg 2’s loop onto peg 1, and knit it. Move the resulting loop off of peg 1 and onto peg 2.  Knit peg 3 and repeat the process.

Continue in this manner until you have one loop remaining.  Break the yarn, slip the loop off of the last peg, thread the tail through the loop, and pull gently to close the loop.

Did you get all that?  Need to see something demonstrated?  Want a few tips and hints?  I video blogged every step.  Happy viewing!

If you have any questions about the process, please be sure to leave them here.  I will do my best to answer!

I hope I’ve enticed some of you to give another look to looming, especially if you’ve wanted to get into needlecrafts but have been unsuccessful, or have felt intimidated.  Loom knitting is as simple as pulling a loop over a peg.  Over, and over, and over.

Add a few other simple techniques, and you can have a finished product to be proud of!

The Fiesta Hats pattern I mentioned in my P.S. can be found here.

Video soundtrack was “Ordinary Girl” from A Few Songs of the Week (Helen Austin) / CC BY-NC-ND 3.0

Tutorials like this represent many hours of work. Consider showing your support by purchasing one of the PDF versions. Thank you!