Whew.  Another great clayathon under my belt.  I really have to make sure that I pull my clay supplies out of hibernation more often this year.  In 2010 there were only four times I did any major claywork.  I think the first step is to make my supplies much more accessible.  Setting up and tearing down my work space is a major deterrent to working on a project, I find.  The easier I make the process, the more likely I will be to do a quick project here and there.

So would you like to see all that I got done?

I already showed you Saturday’s work.  Sunday was my busiest day, where I managed to finish a whole pile of shawl pins and a nice selection of barrettes.  I also formed some buttons but didn’t get to sand them. 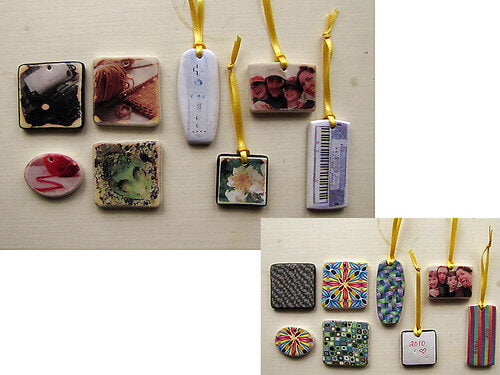 Yesterday I dabbled in image transfers, attempting to pick up where I’d left off last summer.  Results were mixed, but mostly disappointing.  I made four tiles that were to be pendants, and four 2010 ornaments for our tree (since I’d neglected to do it last month).  These are the front and back views of all of those.  I like the ornaments well enough, but the pendants not so much.

I had really hoped to fill my etsy photo shop with a nice selection of photo pendants, but these are just not coming out the way I had hoped.  I’m going to have to either try a different transfer method, or give up on the idea completely.

Today I sanded anything that hadn’t been sanded before, mainly buttons and earring parts.  Let’s hope that I get around to adding the metal to those earring parts, because I think they will be nice.  It’s always a shame when I toss perfectly good components into the bottomless Box of Pieces Never to be Finished… 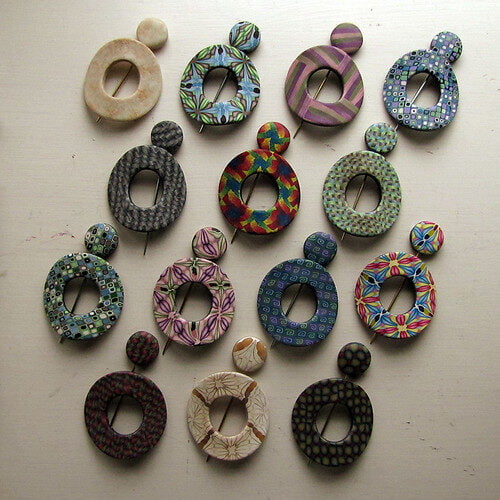 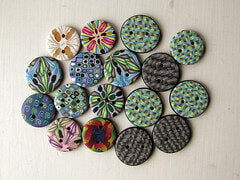 I had fun, but now I’m pooped.  Time to curl up in front of the tv and be a vegetable for the rest of the night!  (By the way, If you like any of the above items, they should be appearing soon in the shop!)

9 thoughts on “Sanded, buffed, and pooped.”