Hello! It’s been a long time since I’ve posted anything here other than bestseller lists. I have been busy with one thing or another for months, but I have a few minutes tonight to post an update, so I thought I’d take advantage of it. So, what have I been up to lately?

Well, from a polymer clay standpoint, I haven’t done a whole lot, except that I’m getting more and more involved with the local guilds. I’m lucky enough to live within a reasonable driving distance of three polymer clay guilds (New Jersey, Northern New Jersey, and Philadelphia), so I’ve been taking advantage of it. I’ve been involved in polymer clay for 10 years, been active in one online pc group or another for much of that time, and been a member of local guilds, but I’m only just now actively participating. The kids are not so little anymore and it’s easier for me to take off for a few hours on a Sunday afternoon, or for a weekend workshop. It also helps that my husband is practically handing me my pasta machine and pushing me out the door 😉 I tend to have bouts of Mommy Guilt, not sure I should be ditching my family for a whole day or two days in some cases, but he knows it’s Good For Me and that I’ll enjoy myself, and he always convinces me to do it. Besides, I think they have a good time spending a weekend in their pajamas watching japanese monster movies!

So, in mid-January I attended a 72-hour clay-a-thon hosted by the South Jersey Polyholics (an offshoot of the Philadelphia guild) and it was a real blast! I’d never done anything quite like it. We took over a hotel near Atlantic City and clayed to our hearts’ content ’til all hours of the night. Fun! I got a chance to try out a couple of techniques I had floating around my head for a while. Here are a few samples: 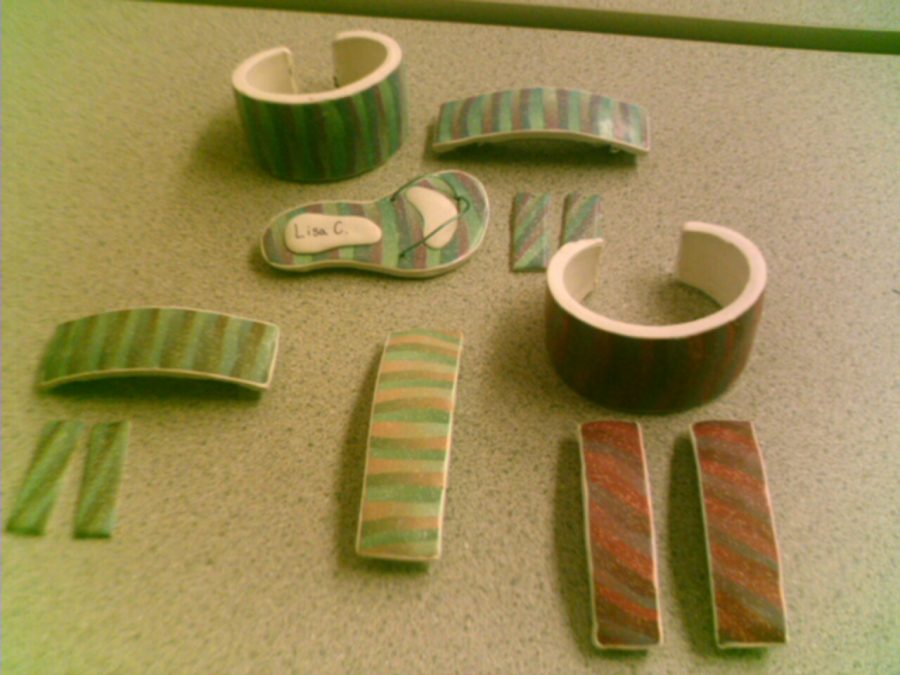 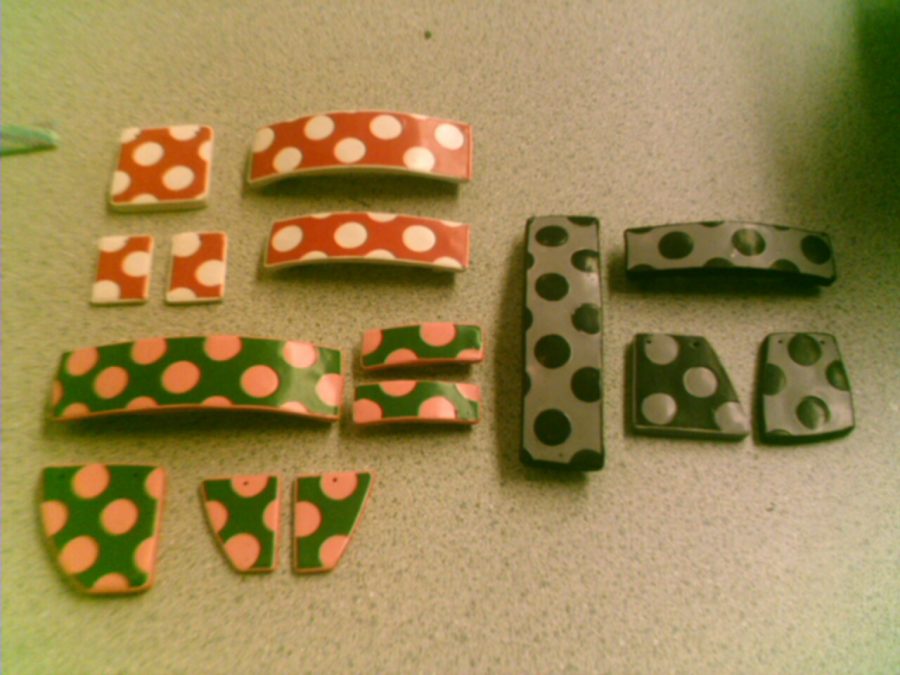 Aside from that, I haven’t really done anything clay-related lately. I do have to make a batch of Birthday Magnets for my son this weekend. He’ll be 6 next Sunday and I always make magnets as party favors (see this article I wrote after his second birthday: http://www.pcpolyzine.com/0204april/favors.html)

On a personal note, I have been keeping really busy around the house. I have had some serious Housekeeping Issues developing over the last few years. The clutter in my home has been taking over little by little to the point where it was suffocating me. But trying to crawl out from underneath it was completely overwhelming. I finally reached rock bottom and created a website to help inspire me to clean up. My thought was that sharing my embarassing living conditions would motivate me to change them. I don’t know if it’s working, but something is, and I’ve been on a real roll for three weeks. I’ve lugged bags and bags of junk out of the house. I’ve filled the trunk of my car twice with piles of things to be donated to the local thrift shop and I’ve filled up 10 garbage cans with things nobody would want. And there’s still plenty more where that came from. How have I lived with all of this cr@p for so long?? I really hope I don’t burn out on this task, but I’m actually enjoying taking care of my house right now. It’s been a long time since I had a sense of pride about it. For the longest time it’s just been an embarassment and I’ve been living in fear of drop-in company. I’m still not done, there’s a lot left to go, but I’m not embarassed anymore. Some days I feel like calling up everyone I know and saying, “hey come over and look in my closets- there’s no longer an avalanche when I open the door!” Our “laundry room” is just a small corner of our unfinished basement, and there’s nothing at all pretty about it, but today I scrubbed clean the sink (eliminating about 8 years of accumulated laundry soap scum) and hung up a fun picture on the wall – the ugly patched-up cinderblock wall. If you had told me a month ago that I’d be taking pride in that crummy little section of the house I’d have thought you were nuts.

Anyway, I’m finally in a really good place with the house. I’m seeing improvements every day, I’m enjoying the routines that are helping me keep the clutter under control and I’m feeling happier than I have in ages – it really spills over into so many other areas when you’re not drowning in junk… Ok, I’ve gone on enough about that! If you want more, you can check out my website: http://www.clarkesworld.com/cleanup

I’ve got some orders to process tonight, and then I’m either going to put away some more of the books & videos that arrived this week (and it’s a LOT – I was running out of so many things, and I went and restocked all at once – now I’m buried in books!) or I’m going to put my feet up crack open a Dr. Pepper, and find something mindless to watch on tv for a while! That last option sounds really good, actually. I may add some pretzels and cheese dip to the mix…

Have a great weekend, everybody!

3 thoughts on “Just some chit-chatty stuff from me”