Aside from the chirping of a few lonely crickets, this space has been awfully quiet for the last few days.  That sometimes happens here when I haven’t been creative, and there isn’t much of interest to share, but this time a lack of craftiness has not been my issue.  In fact, it’s been quite the opposite lately – so much time has been spent in the making, and very little time has been left for the showing and telling.

I’ve missed being here, though, and so I forced myself to carve out some blogging time tonight in between projects. 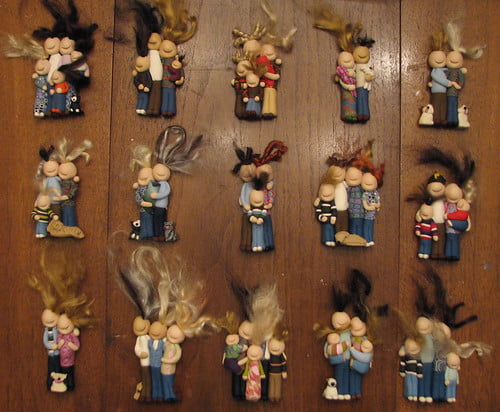 The big news is that the family portrait ornaments are almost done!  Today I formed and cured the last three, and now all fifteen families are ready to receive their facial features and hair cuts.  That’s my project for tomorrow.  Then they’ll be packaged up all pretty and sent on their merry ways.  It’s a relief to have gotten this far; I had visions of a bleary-eyed me, stuffing them into Express Mail boxes on December 23rd and hoping for the best.  Heh.

Ornament work has mostly been a daytime thing for me.  At night, I prefer not to be alone in the dining room hunched over a table, and so I’ve curled up on the couch with more portable work, like knitting and jewelry making. 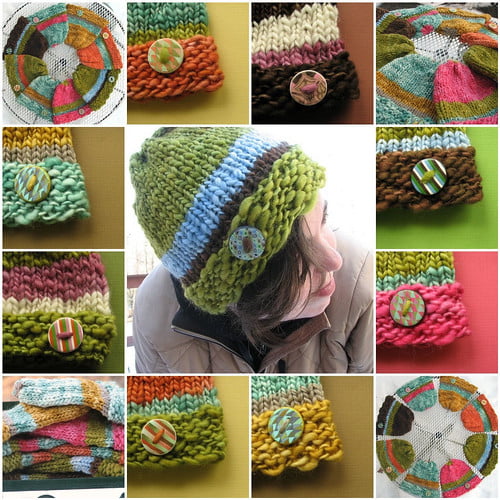 I really enjoy the colorful whimsy of this wool, and the brim of a chunky beanie is a fun place to park a button, too.  I’ve got a few more hats waiting to be knit – one in pink, perhaps tonight, and there will be some aquamarines and purples soon too, I hope. I’m having a holiday open house next week for some local customers and friends, and I don’t want to fall short hat-wise, as they’ve been one of my more popular items.

The necklaces are mostly finished, just a few last touches, and they’ll be ready for the camera (and the blog, the shop, and the open house.)

It feels envigorating to be so productive.  I need to ride this wave and get some other things accomplished, too.  Next on the list?  Getting my holiday groove on and hanging Tacky Santa in the window.  Yeah.  December is feeling good on me today.