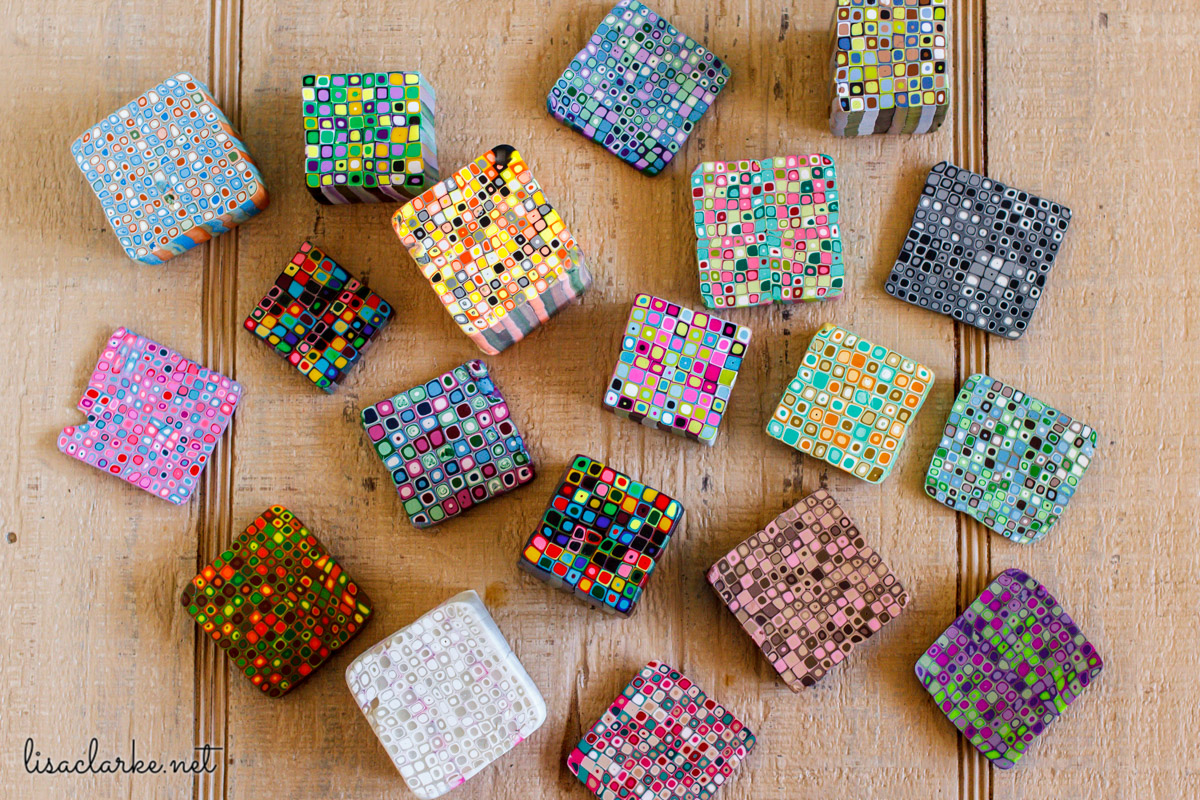 Are you familiar with the Retro Cane? It’s been making the rounds on the internet for several years. I’m not entirely sure who was the first to come up with the idea (though I’ve seen one source say it was Nan Roche), but the technique saw a resurgence in 2012 when Bettina Welker published her take on it.

Personally, I’ve been making them for at least a decade, and I love the mod look.

The physical act of constructing the cane is actually quite simple: insert striped cylinder into clay gun, extrude through square disc, cut up and re-assemble extrusion into square cane. Done in under 5 minutes.

Technically, anyone with opposable thumbs can make a Retro Cane.

That said, I’ve seen a lot of ugly Retro Canes. And even more that are not ugly so much as flat. Contrast is an essential element to these patterns, but sometimes it’s hard to see how to introduce contrast into a design while still using the colors that speak to you.

The trick is in how you build that striped cylinder that you insert into your extruder.

While you can technically put any colors you like together, not every color combination is going to result in a striking pattern. With that in mind, let me give you a few tips, and show you how to use the colors you love, while still ensuring that the finished design really pops. 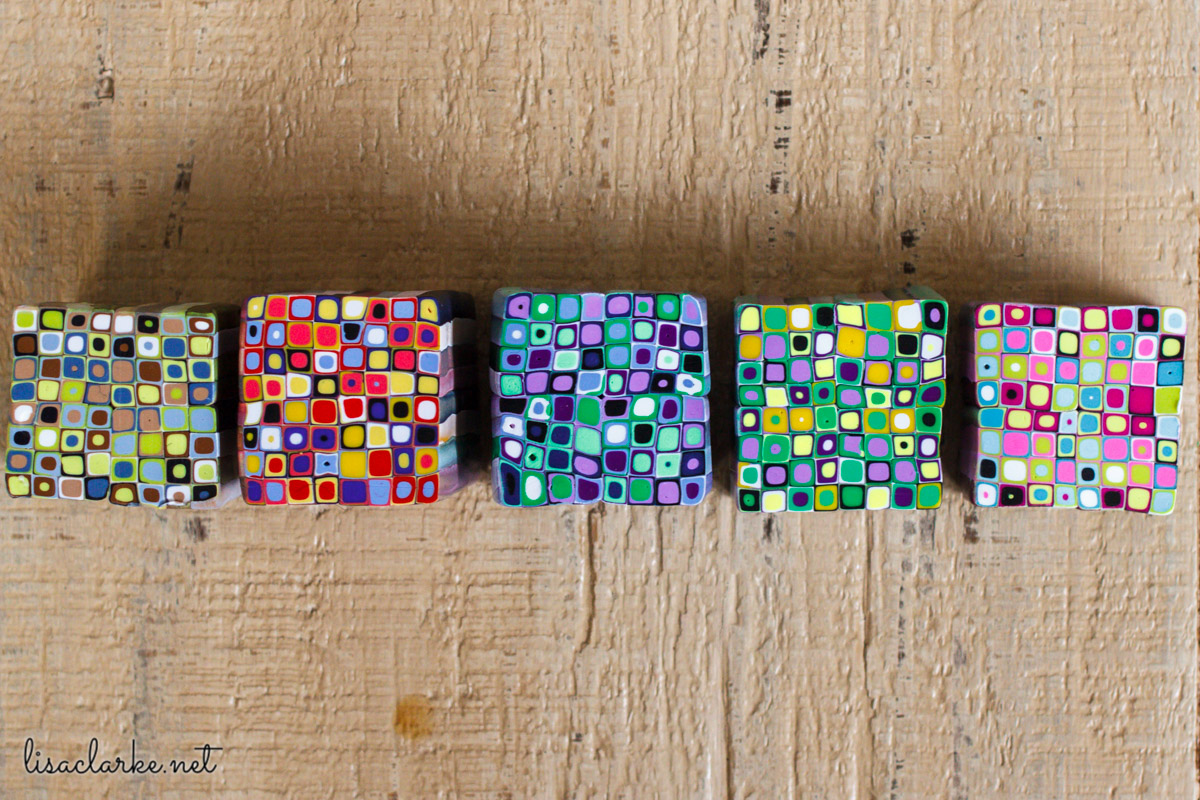 When I establish a color scheme for a group of canes, I nearly always choose three main colors to work with for all of the designs within the group. These colors are generally fairly dark or richly saturated, and all of my designs involve adding white and/or black to them in varying degrees. This ensures some amount of contrast, even when my three main colors are similar in value. This approach works well with Retro Canes.

You can feel free to use fewer colors (or more) if you like, but keep these tips in mind when making your selections:

So, go ahead and choose your three favorite colors. In this example, I’ve used Premo in Wasabi, Denim, and Raw Sienna. You’ll need less than a package of each, as well as some black and some white.

You will also need a 1/2-inch circle cutter, and a clay extruder. 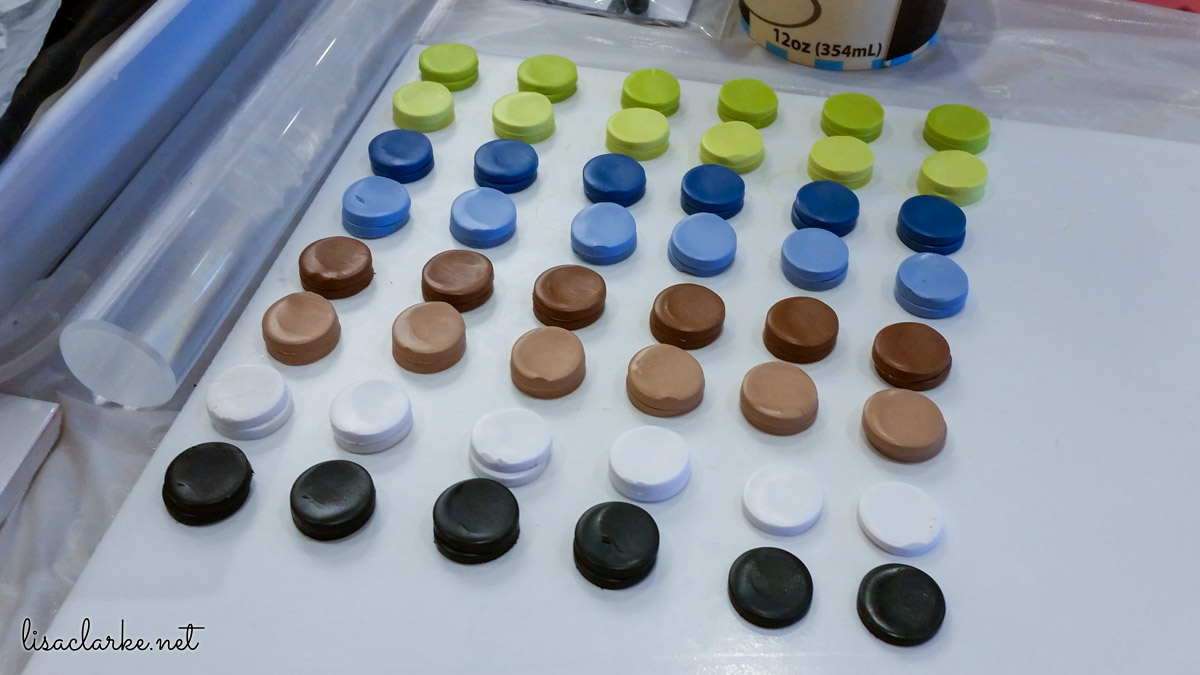 Condition your three main colors and the black and white.

Take some of each of the three main colors and mix them with equal amounts of white in order to make lighter versions of themselves. 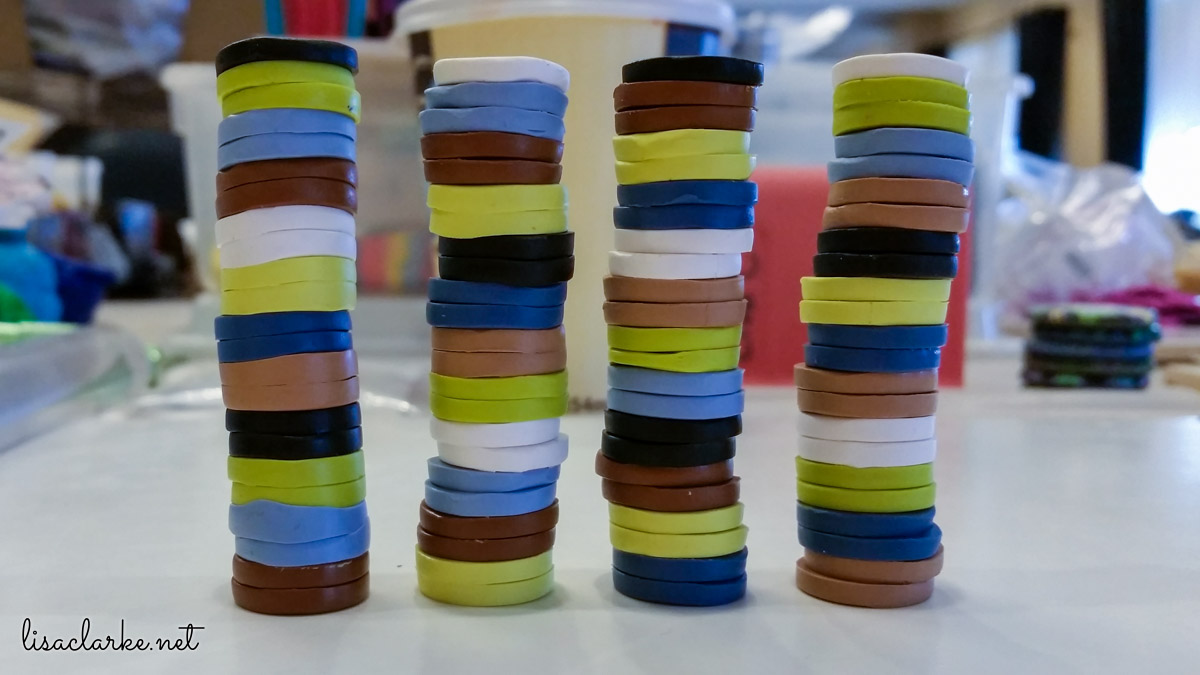 I like to make four extrusions for a single Retro Cane, and I like to arrange them in a particular way. I have a few rules for myself:

If these rules seem complicated, feel free to disregard them and experiment with your own configurations. Or, just look at the image above and copy my assembly directly. 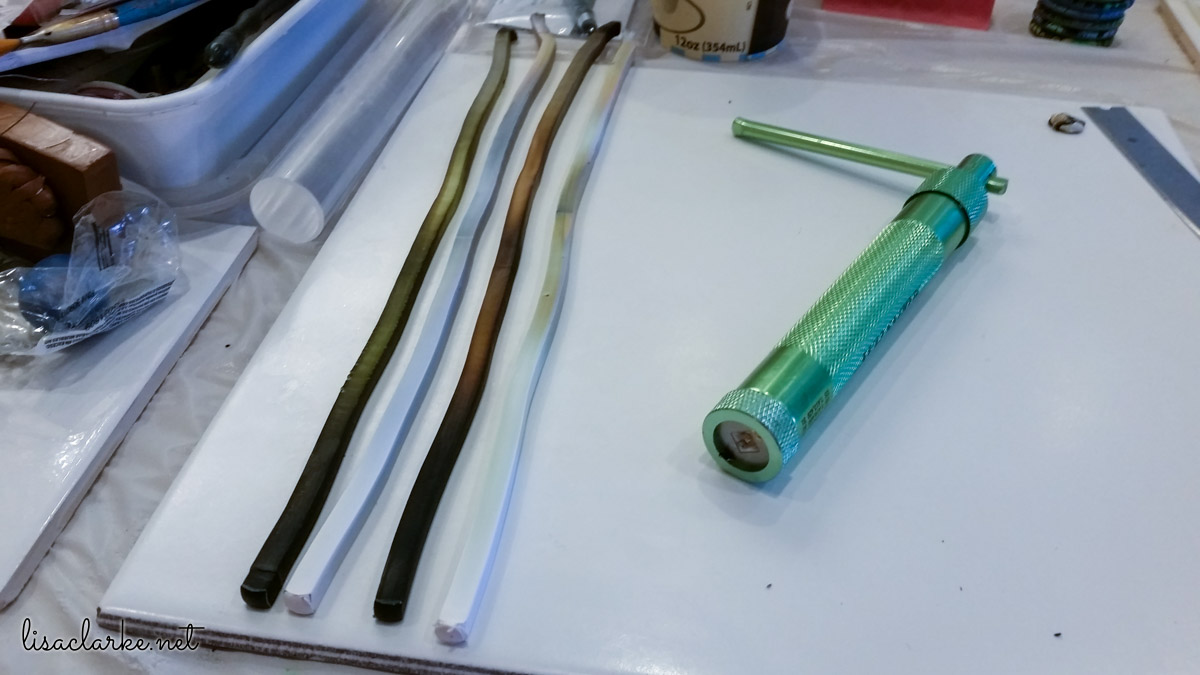 Load the first striped cylinder into the barrel of the clay gun and extrude it through the square shaped disc. Repeat for the remaining three cylinders. 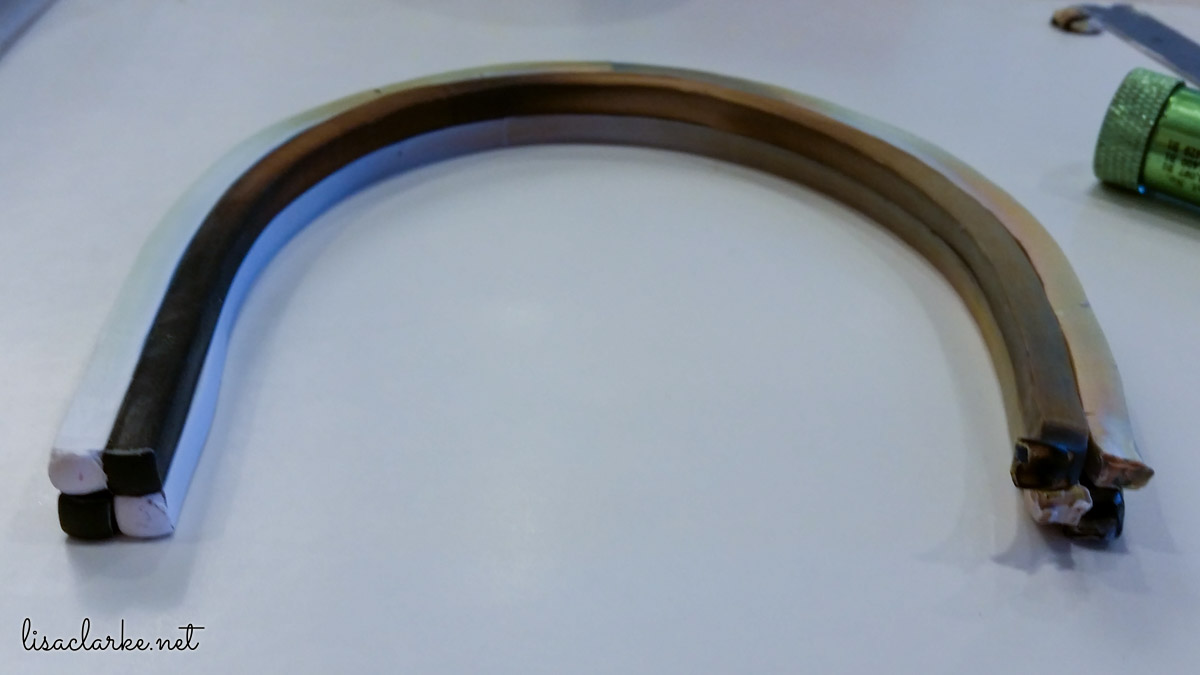 Stack the four extrusions together, checkerboard style, with blacks and whites opposite each other diagonally.

Note: you don’t need to make a “U” shape. I did it here to illustrate what both ends look like. 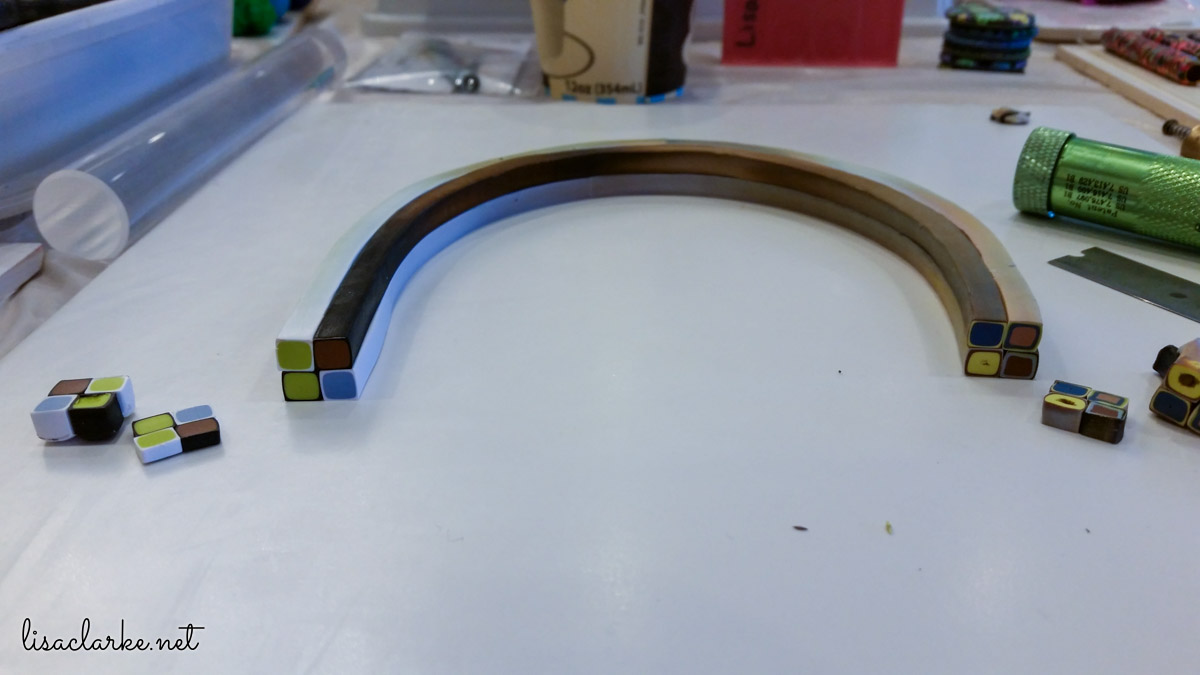 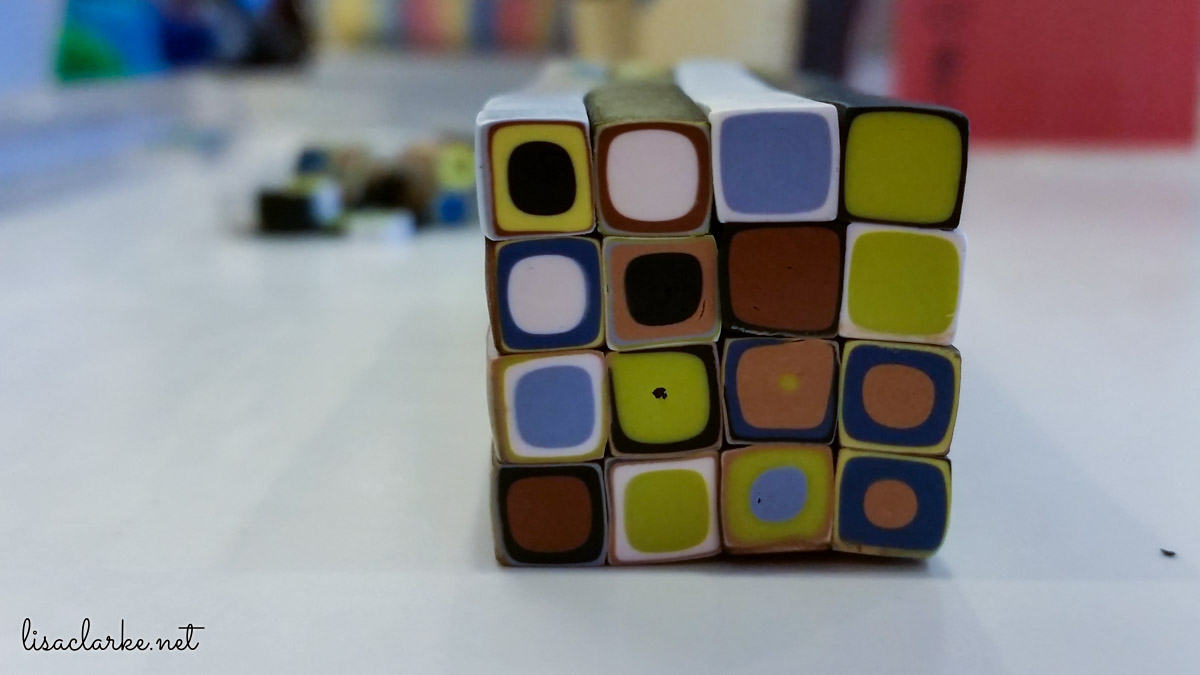 Cut the cane into four equal-size pieces and stack them together.

You can stop here, if you want, but I like my Retro Canes to be more complex. 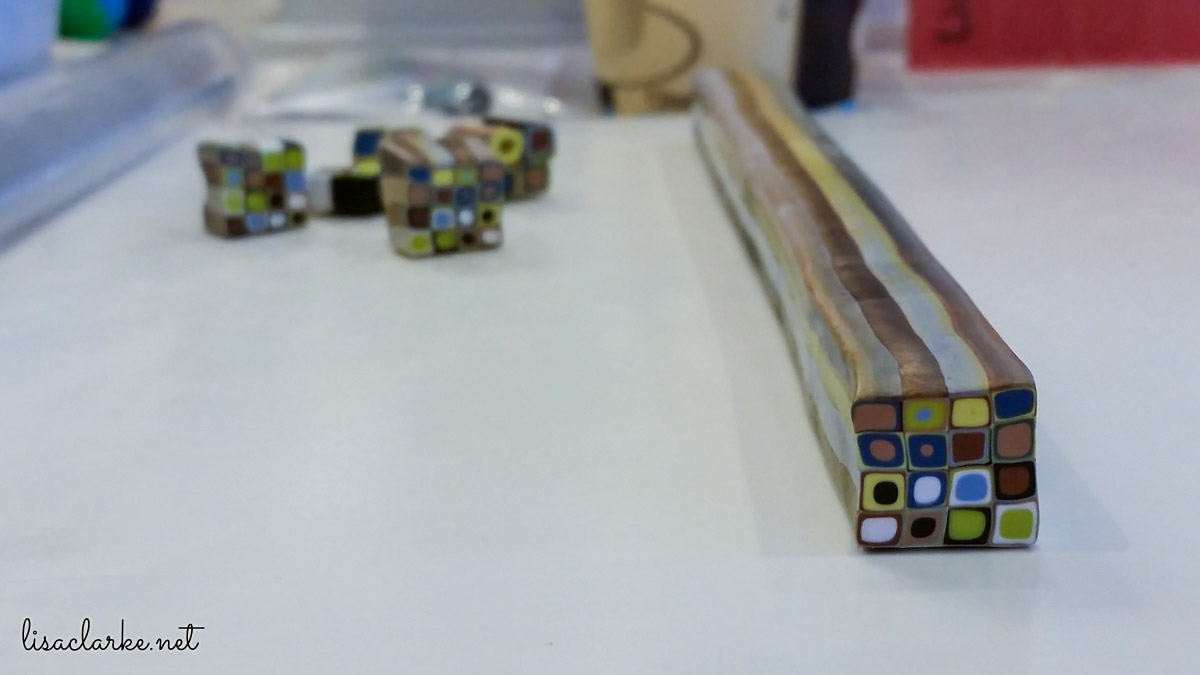 Reduce this cane until the face of it is less than an inch across. Cut off any distorted ends. 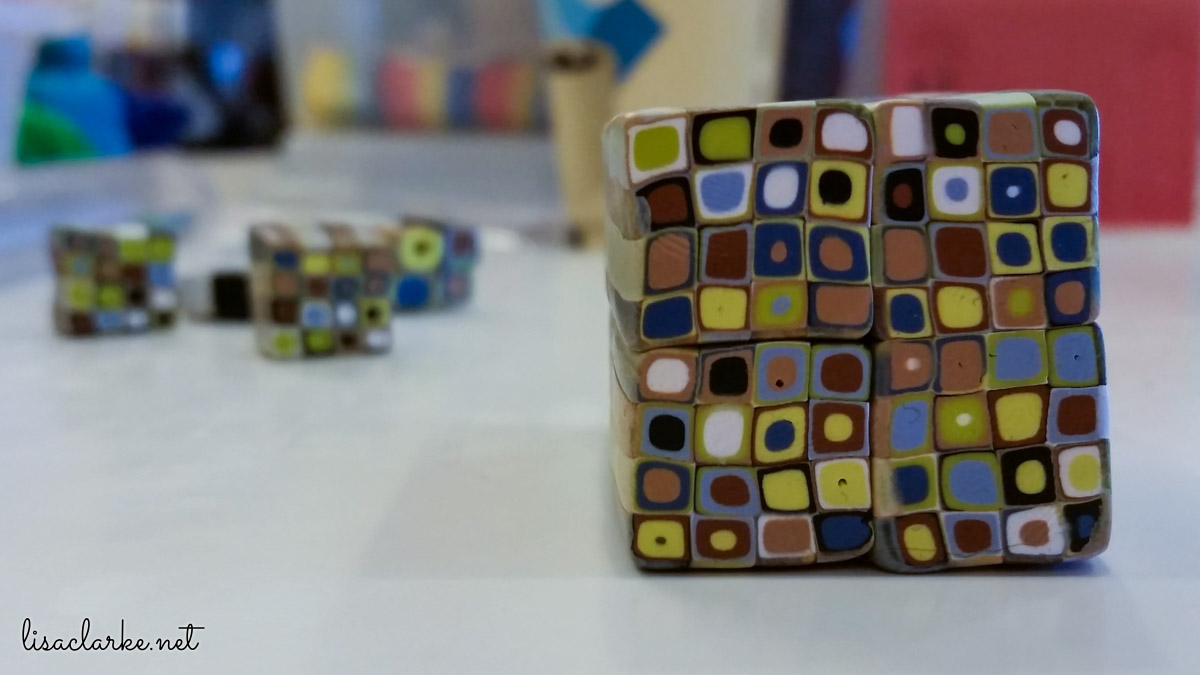 Cut the cane into four equal pieces and re-assemble as shown. Reduce slightly, just to make sure all of the pieces are nicely adhered to each other.

Perhaps you want a brighter, more subtle pattern? Eliminate the black altogether. Use your main colors, the colors mixed 1:1 with white, the colors mixed 1:3 with white, and white itself. That should be enough to introduce some contrast into the design without making it bolder than you want it to be. In fact, this is how I made Retro Canes myself for many years. Several of the canes pictured at the top of this post were made that way.

Feel free to experiment with the width of the stripes and the arrangement of the colors, and see what you get!