Practical matters somehow always end up pushed aside when my brain is confronted with an intriguing new thing to mull over.  And really, that’s what new creative techniques feel like to me – a puzzle to be worked-out.

I’m about an inch into the project, and I won’t lie – it confuses the heck out of me!  Not in a “what am I supposed to do next?” kind of way, but in more of a “how can I do the next step without getting tangled up in all of the dangling threads?” kind of way.  Hopefully soon my hands will find themselves in a rhythm that makes some sense, but until then it’s slow-going. 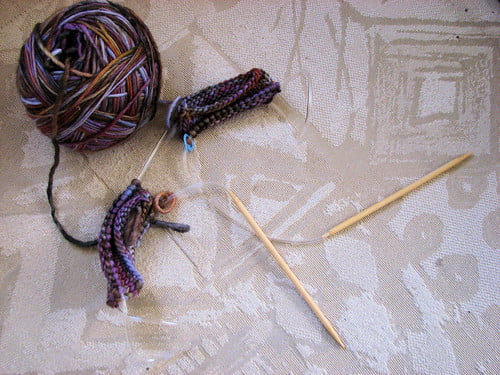 The circular needle I used came from Brilliant Knitting on etsy.  I don’t know much about what circular needles should cost, but it seems to me that $25 for fifteen pairs of 47-inch needles in fifteen different sizes is a pretty good deal.

The yarn is Malabrigo Merino Worsted, which I seem to have some kind of scary addiction to.  And I have to say… last night? With the new needles? Oo la la, I think I’m in love.

It’s a strange thing.  I never really felt that there was a tactile difference between loom-knitting one yarn and loom-knitting any other, but it seems to be different with needles.  The slight friction between the bamboo needle points and the Malabrigo was almost seductive.  Is that the right way to describe it?  Maybe.  Maybe not.  All I know is that I so enjoyed the way it felt to knit these wrist-warmers last night.  It was good.

My husband is going to be jealous 😉

14 thoughts on “If loving Malabrigo is wrong, I don’t want to be right”