I didn’t sleep very well last night, maybe fifteen minute stretches here and there.  I was too twitchy to sleep, constantly aware that at any moment the phone beside the bed could ring and startle me awake, my heart beating frantically out of my chest.  The phone does that to me.

It was an unusual night, that had me waiting for Neil’s call from the hospital, wherein he would tell me everything was fine and I could come pick him up from the emergency room now.  Had I known the call wouldn’t come until 6am or so, I probably could have snuck in a good four or five hours of sleep.  The important thing, though, is that the call did come, and all was (and still is) well. 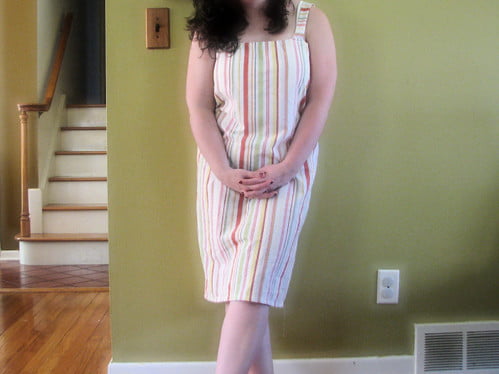 There is nothing like an essentially sleepless night to take the wind out of one’s productive sails, and so I spent much of this morning lolling about on the couch watching Clean House reruns, thinking I should nap, but never quite getting there.

By the time I realized that I didn’t want to spend the day in a television coma, it was already clear that this day didn’t want to be a typical busy Monday.  It was looking like a slow, quiet Monday, with little pockets of productivity now and then:  a little tidying in the kitchen, a little sewing… 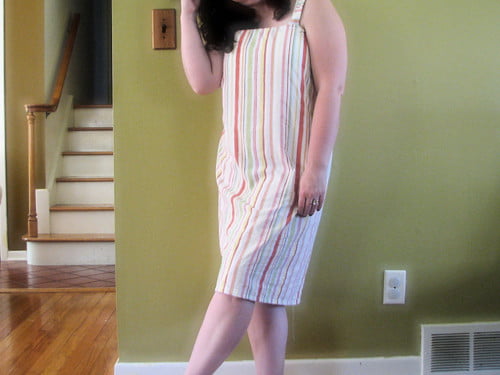 What once was a Ralph Lauren duvet cover became a summer sheath dress.  It was much appreciated as the mercury began to rise past 90.

We’re not prepared for heat like this in April.  A 94-degree afternoon in mid-July is considerably easier, because it’s expected.  In July, there is a kiddie pool in the back yard waiting too cool off one’s feet, and frozen strawberries in the freezer, waiting to become refreshing, icy drinks.  April doesn’t have that kind of support in place, and so there’s a lot of sitting around, and fanning of oneself, and doing of the absolute minimum.  Particularly when one is deeply tired, to boot. 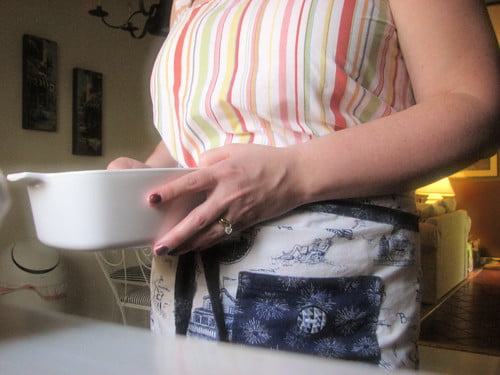 So the bare minimum it was. Supper got made, and blogs got read.  I’d let my feed reader languish for the last few weeks, and it was a pleasure getting reacquainted with so many of my favorite reads. The evening breeze made it pleasant enough to do some of that catching-up while sitting outside, and so I did.  And then something I read made me go get my camera and look for a bench to stand on.

Did you know about Bench Monday?  I didn’t either until tonight.  Luckily, there is flexibility in what passes for a “bench” and a wrought iron lawn chair sans cushion is also acceptable.

Flexibility.  I guess that’s what a day like today is all about – letting the ambitious plans wait a while, going with the flow of unseasonably hot weather & sleepless nights, and settling in to some peaceful puttering.