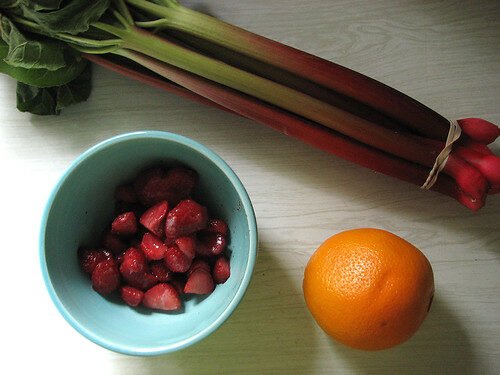 The boys and I went to the farm on Saturday, and it turned out it was their opening day.  I think we may even have been their first customers.  There wasn’t much set out in the shop just yet, but I did pick up some fresh rhubarb.

My plans for this batch? I’ll chop it up, combine it with the last frozen remnants of the 2009 strawberries and some orange juice, and puree it all together.  The puree can be substituted for the pumpkin in my pumpkin bread recipe.  It’s delicious!  And it’s about time I had something to munch on for breakfast that doesn’t come in prepackaged bar form…

Last year I made strawberry-rhubarb jam for the first time.  Spread on banana sandwich loaf with natural peanut butter, it was heavenly.  So, that’s a definite to make again this year.

I’ve been reading Deborah Madison’s new Seasonal Fruit Desserts, and she has some nice ideas, including a syrup that sounds like it would pair well with vanilla ice cream.

Rhubarb seems to be available for a nice long time around here, so there’s plenty of opportunity for experimenting.

Do you have a favorite use for rhubarb that you’d be willing to share?

12 thoughts on “Favorite uses for rhubarb”