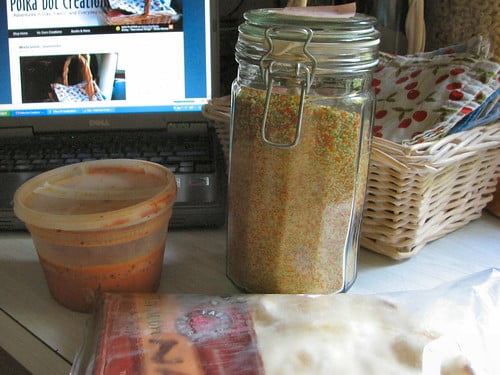 I sometimes think about people from the past and wonder how they would react to the way the world is today.  How would an 1800’s farm girl feel about cruising down a busy highway with the top down?  What would a Revolutionary War era housewife think about the 200+ television channels she could be watching while folding her laundry?

My paternal grandmother was born in 1908.  When we would visit once a month or so during my childhood, she would spend all day in the kitchen making a three course Italian feast.  Being a picky child, I would have been happy just to have a bowl of spaghetti.  I had no use for antipasto or chicken on the bone.  Still, I remember all of the preparation that went into those Sunday dinners, and I remember the cleanup that happened afterwards.  And some days, when I am getting supper ready for my own family, I think about Grandma and wonder, what would she think?

She died in 1991, before I had my own family, before internet radio and digital cameras became important parts of my vocabulary.  Before I became brave enough to try more unusual foods.  What would Grandma think as I whip through supper prep (defrost last week’s Murgh Tikka Masala sauce, microwave some couscous, heat up a few loaves of pre-packaged naan) all while being entertained by a Prairie Home Companion podcast and snapping pictures for my blog?  Would she find it too foreign to really comprehend?  Would she think I was trying to do too much at once?  Or would she be completely amused, and think, “wow, what fun it would have been in my day to have had a microwave oven and a laptop that could stream Pavarotti!”

I choose to think the latter.  Because I also like to think that the as yet undiscovered wonders that will be commonplace in my granddaughter’s kitchen someday will amuse me.