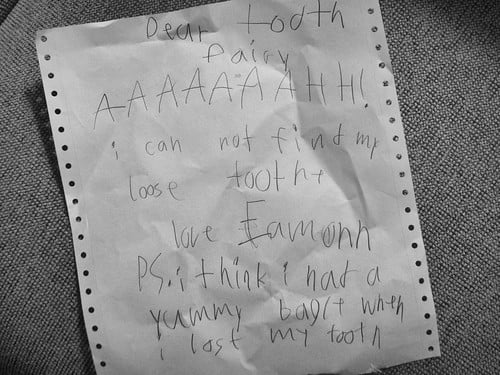 It was just three days ago that I asked Eamonn if he had any loose teeth.  Maybe he was nervous about the idea of losing a tooth?  I’m not sure, but whatever the reason, he resisted my attempt to check his front teeth, or to show him how to check for himself.  I never did get to see if anything was loose, but I assumed it wasn’t.  My older son was 7 1/2 before his first tooth fell out, and I had no reason to believe Eamonn would be any different.

So, you can imagine it was a bit of a surprise last night, when Eamonn opened his mouth to laugh and I saw a little hole where his bottom left front tooth had been.  Somewhere in the last three days, that tooth disappeared, and nobody even noticed!  I suspect it came out in the bagel he had for lunch but there’s no real way to know.

I’ll admit I was momentarily distressed that I wouldn’t be able to keep Eamonn’s first baby tooth socked away in the top drawer of my nightstand, like all of his brother’s baby teeth.  But then I laid eyes on his letter to the Tooth Fairy.  Oh, this is a much better keepsake than the tooth itself.  Old teeth don’t make me giggle quite so much as that letter, which is quintessentially Eamonn: my silly little, growing-up-so-fast, 6 1/2 year-old, tooth-losing, boy.