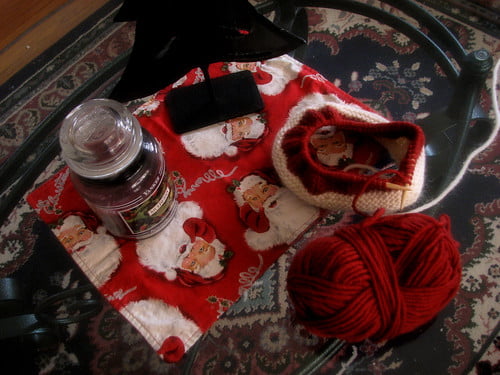 Every time I sit down to blog lately, my head fills up with lazy thoughts: I don’t feel like uploading my photos to flickr; I don’t know what to write about; maybe I’ll have a quick peek at my email first.  And on and on.  Until here we are six days since my last post, which must be some kind of record for me, and I still just want to curl up on the couch under the bankie o love and watch some mindless tv.  What’s up with that?! 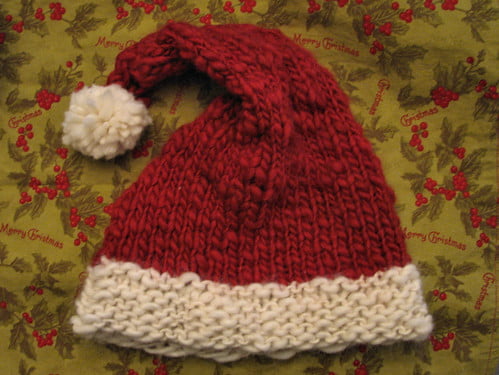 Well, I’m making an effort to shake that urge, and do a little bit of sharing.  While I haven’t been posting at all, I have still be making things.  Like this Santa hat.  It’s an improvised pattern, a fact which becomes very clear if you look at it closely.  I used Malabrigo Gruesa, and started off knitting it in the same manner as my Fiesta Hats.  After a while, I began decreasing one stitch per row until I was down to 4 stitches or so, at which point I bound off, made a pom-pom, and attached it to the tip of the hat.

There are two major problems with this hat:

The first problem, I have figured out, would be lessened considerably if instead of decreasing once every row, I decreased twice every other row.  It looks like you need one regular knit row in between the decreases to keep everything nice and tight.

As for the second problem, once I realized it was too small for me, I asked Aidan to try it, so I could see what size head it did fit. Well, it turns out it fits nine-year-olds, and he showed such enthusiasm for it, I let him keep it instead of proceeding with my original plan to frog it and try again.

I still wanted a hat for me, though, and so I ran out and got some cheaper wool this time and tried again. 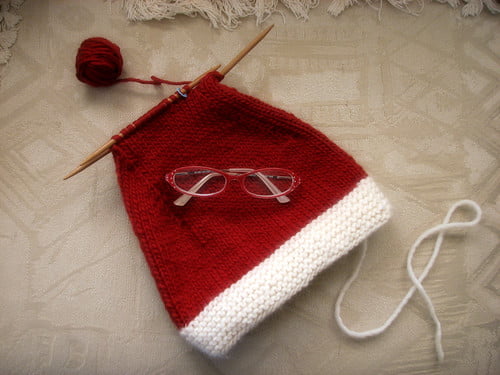 This is Lion Brand Alpine Wool, which is not as bulky as the Malabrigo, and so it’s been a much slower knit.  I have been keeping in mind the issues I had with the first hat, and compensating for them in this hat, but wouldn’t you know it, two new problems have cropped up?

It’s sounding like I am going to need to make a third hat if I want one for myself.  I think I’m just going to scour the countryside for another skein of that yarn, finish up this one hat that’s still on the needles, surrender it to Eamonn, be happy that my boys still want handmade things from Mom, and move on to something else.  I’m all Santa-Hatted out!

2 thoughts on “Boys and their hats”