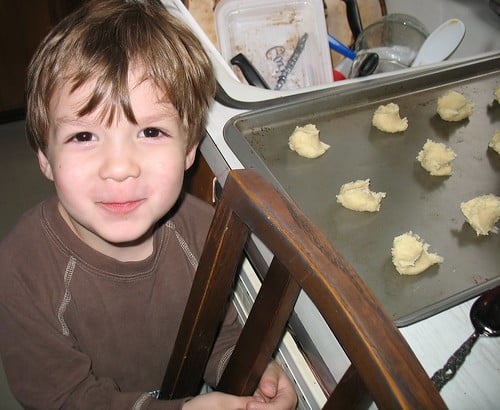 We made a different kind of cookie yesterday and were waaaaay more successful than we were with the ill-fated Pumpkin Biscotti. This time I had the “help” of a little person, which is always nice, and we slaved away all afternoon getting that sugar cookie dough perfect. Yes, it takes the ultimate concentration to combine melted butter, an egg, and a pouch of cookie mix just right 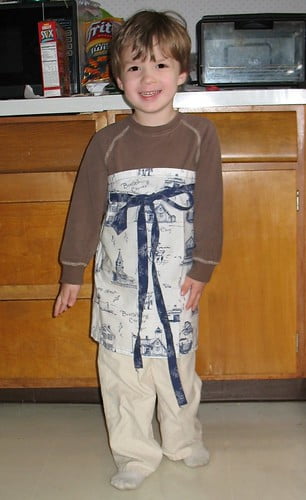 It also takes the proper attire. During the early summer, when I was on my big apron kick, I had made one for Eamonn using some Curious George fabric and a thrifted sheet. He’d never used it since then, and wouldn’t you know it, I had no idea where to find the darn thing. So, he wore my Susan Branch apron – the pocket ended up in the back, and the ties could have wrapped around him twice before tying, but he was happy, and I think he’s just cute as a button like that. 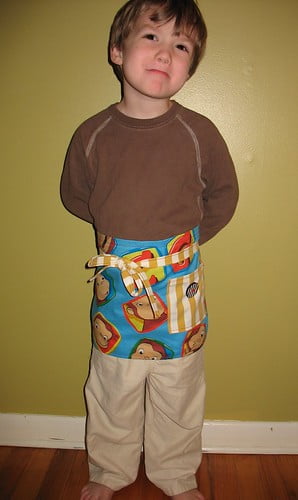 A few hours later, I did find George. I had never put a polymer clay button on it, so I found one that I’d made in navy blue & white stripes and sewed it on with orange embroidery floss – I figured I’d be consistent with the theme of none of the elements of this apron matching each other. Now I just have to remember where I put the apron the next time we bake… 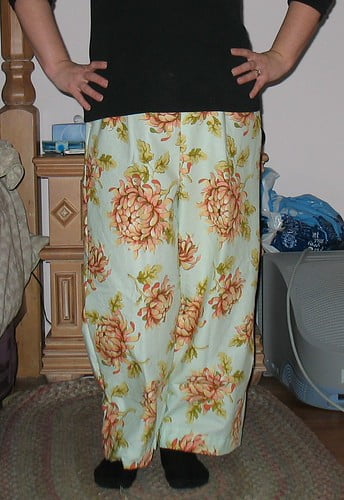 Pants. Made ’em. Love ’em. These look even more like pj’s than the other ones, though. What I really need to do is make a pair in a plaid flannel or a solid brown, or something like that – something that doesn’t scream “I rolled out of bed this morning and didn’t bother to get dressed all day.” As much as I love my Heather Bailey Freshcut Painted Mums, they really do look more like a lazy morning than a conscious fashion choice. 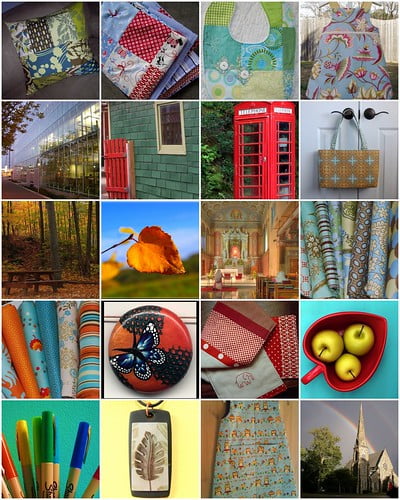 This week’s flickr favorites. Check out the Sharpies! Did you know there’s an entire flickr group devoted to photos of Sharpies? Two, in fact! Guess I’m not the only one who needs to have every color…

The boys have been asking us all week if we can go to a hotel this weekend. Being very much not made of money at this point in our lives, I think a spontaneous weekend away at a hotel is not in the cards for us. However, I have had them think about what their favorite parts of previous hotel stays have been. They’re making a list, and we’re going to try to recreate those experiences as much as we can. So far their list has things like

I think we can do these things with a game night followed by a day trip to a shore town about an hour away from here. I just hope the weather cooperates and that having to sleep in their own beds is not too much of a disappointment!