I know it’s Wednesday, but I was up to my eyeballs in these yesterday, and I’m still not done.  I got 3/4 of them off to the post office first thing this morning, and the rest are tricky little suckers that I will deal with after I hang out here a bit.

Ok, so for Touch-up Tuesday, I wanted to show you something that I think is kind of cool, if I do say so myself…

Here’s the original, straight out of the camera:

First I cropped the photo, and then added warmth and contrast to it, as usual.

Then, I added two texture layers: “layers” from Kim Klassen, and #6 from Shadowhouse Creations’ Aged Canvas set.  I don’t, unfortunately, remember the opacities or blending modes I used, but I want to say either Multiply or Darken, and both had some level of transparancy to them.

I drew a rough selection around the daisies, used one of my favorite PSP functions on the selection – inside-outside-feather – at 100px, and masked out the textures.  My main goal was to have the center of the main daisy crystal clear and very sharp.  The rest of the flower parts could have some degree of texture on them, hence the feathering.

I sharpened the center a bit, added my signature to one of the bottom petals, and was done.

Here’s the cool part.  We’ve had an empty wall in the dining room since we painted – something like three years ago!  We also had an empty 24×36 frame that we bought at least ten years before that.  So I took one of the many free Vistaprint offers that have been cluttering up my email inbox, and had a banner printed. 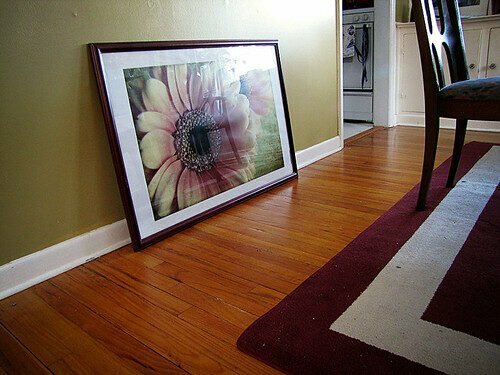 As you can see, I haven’t hung it up yet, but I will this week.  Ideally, I’d get a mat for the frame, but for now, I’ve just taped the banner to the white paper that came with the frame, and it looks just fine.  (Actually, it looks a lot better in real life than it does in this photo for some reason – it’s really not so dark and contrasty.)

I’m so jazzed to be able to put something of mine up on the wall in such a big way!  I mean, my snapshots are all over the house, but this is larger than life, and kind of artsy.  It feels different to me somehow.

Plus, it was so affordable, that I won’t feel bad if I decide in a week that I don’t really like it after all.  Those free VistaPrint offers just keep on coming…  I could make banners for every season!

P.S. I’m going to let you in on my dirty little secret.  The flowers in that photo? They are still on my dining room table.  Dead and crispy.  Just hanging over the edge of the vase waiting for someone to accidentally bump into them so that they can disintegrate all over the table.  Ah, yes, just call me Susie Homemaker!