I’m feeling less grumpy at the moment – it’s not too hot yet, and the humidity isn’t particularly oppressive, so I’m taking advantage of the ability to be outside.  It’s nice.  So, why don’t we go with this good mood while it lasts, and talk lightheartedly about sweaters?

Sweaters, you ask?  Really? It’s been so hot this summer, it’s hard to imagine wanting to sit down with a pile of wool and knit a sweater.  It’s hard even to imagine wanting to read about such a thing, but I hope you can forgive me just this once.  I’m not talking about a honkin’ big adult sweater that covers your lap as you work on it.  I’m talking about a cute, itty-bitty baby sweater.  You hardly know you’re working with wool on a 94-degree day, in that scale. 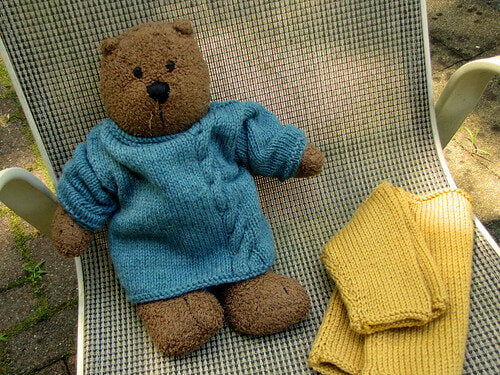 I wrote before about the sweater I made my nephew-to-be.  If you recall, I’d done it in the 3-6 month size according to the Baby Boatneck Sweater pattern in Debbie Bliss’ Baby Knits for Beginners and used the Cashmerino Aran called for in the pattern.  It came out cute and oh so soft, but I was frustrated with all of the sewing I had to do at the end.  Plus, all of that stockinette stitch really bored me.  Yawn.

So, I decided to make another one, this time a smaller size, and with as much knitting in the round as humanly possible.  It just seems to make more sense to me that a tube-shaped knit ought to be constructed in the round.  Is that just me?  Maybe it’s my background in knitting looms talking – nearly everything on a loom is done in the round. 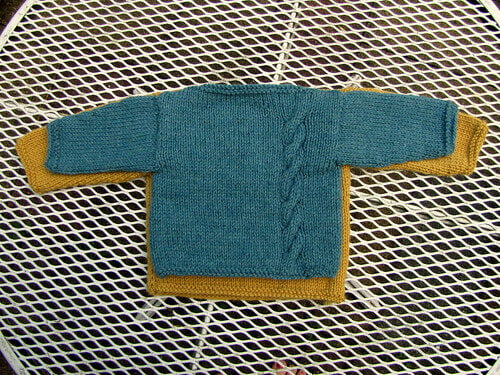 So, anyway, using the Debbie Bliss pattern as a sizing-guide, I cast-on with circular needles for the body, and added a simple cable stripe a la the Dashing gloves I like so much.

When it came to the sleeves, I did them in the round, too, both at the same time, using Melissa Morgan-Oakes’ Two-at-a-time method, as explained in this book.

In the end, the only things I had to stitch together were the shoulders and the sleeves to the body.  Sooooo much better.  And no dreaded Second Sleeve Syndrome.

For this sweater, I used Berocco Vintage, which is a great yarn for the price.  It only took one skein, making this sweater less than a third of the price of the first one. 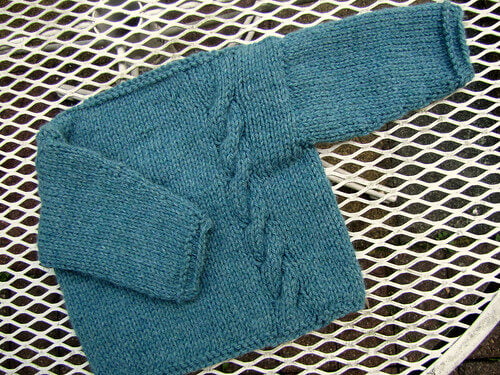 I have another skein of Vintage in a pretty green.  I don’t know if three sweaters for the same baby is overkill, but I may just go there…

Uh oh.  There’s a good chance I am becoming That Aunt. Poor kid 😀