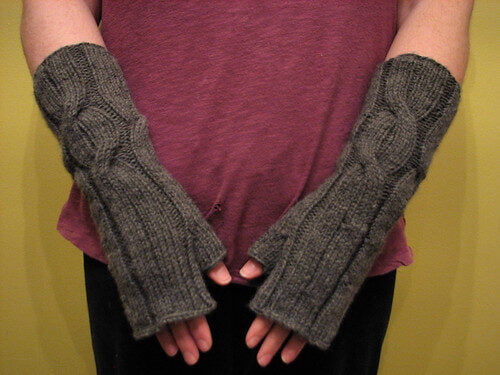 I’ve been drooling over this pattern since before I knew my way around a pair of knitting needles, and I finally started a set back in January.  This is Dashing, from Knitty.  I love them because they are masculine enough that I can make them for those hard to shop for men in my life, and also because they have that elegantly simple cable.  It seemed to me to be one of the less painful ways to be introduced to knitting cables.

I was right – knitting these cables was pretty easy.  The biggest problems I had with these were issues of gauge and of thumb-making.

I made these in Berroco Vintage, which is a nice yarn for the price (I’ve since stocked up on several colors so that I can make a pile of these gloves for birthdays and occasions later in the year).  I initially cast-on for the larger size, using size 8 dpns, but it wasn’t until I was nearly finished with the first glove that I discovered how enormous it was.

So I frogged it, and decided to try a different approach.  For my second go, I used a large number 7 circular, and used the method as described in Two at a Time Socks to make both gloves at once. (As an aside, I still have not made a pair of socks, but that book has been so valuable to me just for the general method alone – it’s great for anything that comes as a pair.)

This time, aside from a bit of difficulty with the thumbs, I met with success.  The art of picking up stitches around a thumb hole I’m sure is something that will come to me with practice, but despite the un-elegant thumbs, I just love the way these came out.  I wanted to keep them for myself, but I sucked it up and presented them to my father-in-law yesterday as a belated birthday gift.

I am so impressed with the universal appeal of this pattern.  They look nice on me, they look nice on Neil who posed for the second shot above. Everyone I’ve shown these to has really liked them – male, female, child.  My 10-year-old would like his own pair.  Guess I know what I’ll be knitting all spring and summer – and I thought I’d be putting the needles away for a few months.  Ha!

4 thoughts on “How dashing”