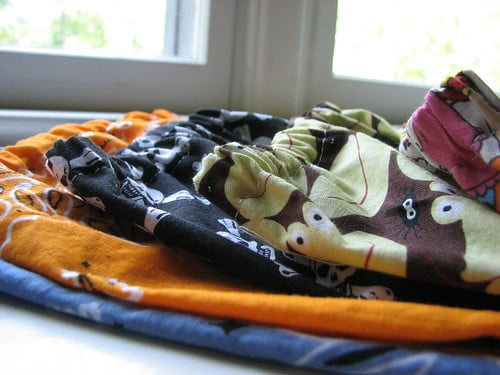 I think I have saturated the marketplace here at home. The boys were really excited about the eight pairs of bandana pants I made for them this past weekend, but you see, I could’t stop there. No, those eBay bandanas were really lacking in the quality department, and I just wanted to make a few pairs with nice bandanas. So Monday night I picked up a few at Michaels, along with some packaged fat quarters they had, and today I turned them all into four more pairs of shorts. 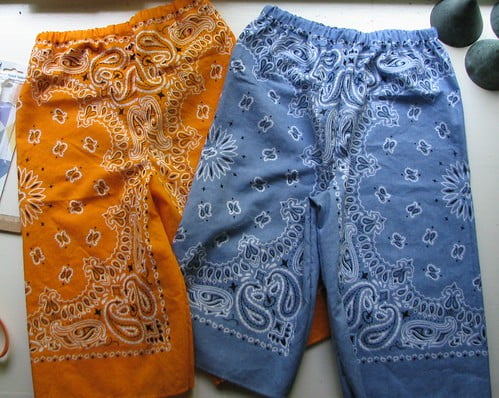 This afternoon, aglow with the excitement of a newly-finished project, I went in search of the intended recipient: “Eamonn! Look what I made for you – another pair of shorts! But this time they’re light blue!” He looked at me and sighed. My five-year-old sighed at me! It was clearly a pity sigh. It was a sound that said “Poor Mom. I know I should work up some enthusiasm for this, but how many pairs of shorts can I really get excited about? Maybe I’ll just say nothing and go back to watching Spongebob.” Clearly, he didn’t recognize how superior these pants were to his other four pairs.

The reaction wasn’t much better from the older one. I think it went something along the lines of “uh huh.” 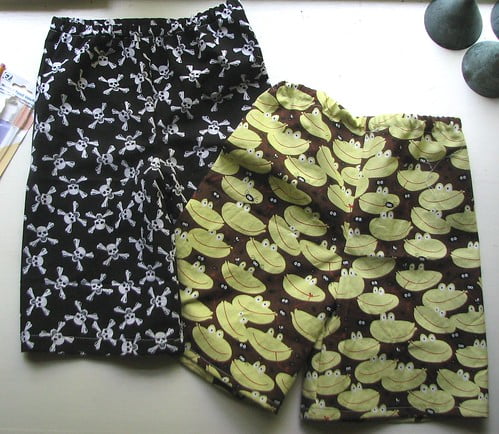 It took less than a week to go from “oh, cool!” to “uh huh.” I knew I should have learned to sew five years ago when they were a baby and a toddler – when they were still cute and didn’t sigh patronizingly at me 😀

I did get a good laugh this afternoon, though, when I was showing Aidan everything I’d sewn while he was in school. “I made these blue shorts for Eamonn, these orange ones for you, these frog shorts for Eamonn, and this for you:” 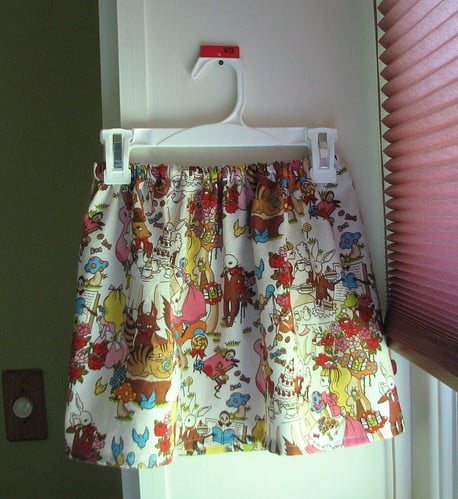 You should have seen the look on his face

No, in reality the skirt is for a 6-year-old friend of ours. She picked out the fabric (a Japanese Alice in Wonderland print from Reprodepot) and I sewed it up. It’s the first time I’ve gotten to make anything for a little girl. It was fun. Wish I knew some more little people of the female variety. Skirt-making is so darn easy, and pretty economical when you’re doing it for a small person who doesn’t need much fabric. 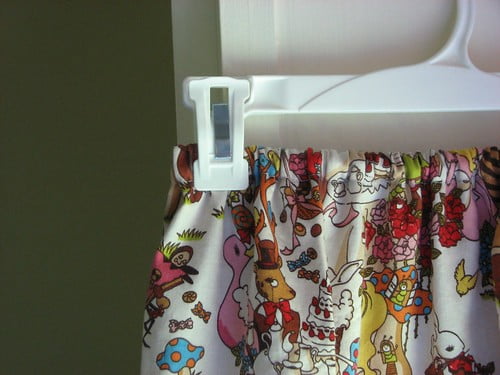 Oh, one thing I wanted to mention about the shorts: if you’re interested in making your own fat quarter shorts, I did them in exactly the same way as the bandana shorts (following this tutorial), the only difference being that the legs needed to be hemmed. I wish I’d realized earlier (before my sons got bored with the idea) how easy it would be to make play shorts in all kinds of fun fabrics.

Maybe I should just get my My Friend Mandy doll out of my parents’ garage. She’d appreciate play shorts from me, I bet 😀