…but we can all pajammy in whatever we’ve got! Sorry. Sandra Boynton took over my keyboard there for a minute.

Stripes. I wanted to talk about stripes. Dan Cormier got some really nifty-looking stripes with his take on the Skinner Blend, and I’ve been itching to try my own version for a week now. Since I am officially 1/2 of the way through the orders I have to process, I decided I deserved to indulge myself for an hour or so. 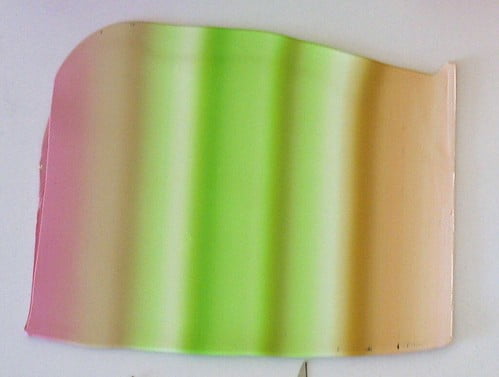 I created a template that would result in 1/4-inch solid-color stripes, alternating with 3/4-inch skinner blend stripes and I wanted to complicate it somewhat by blending the white with three colors instead of one. All of my color schemes are comprised of three main colors and white (or another light color), and I want to be able to use this technique to make veneers that match my existing canes. My final goal is to compress the stripey sheet into a new cane design. A square cane with soft striping that includes all three main colors, and several combinations of those colors with each other and with white really sounds appealing to me.

My first attempt, which took a three-way skinner blend and combined it with a white step blend from my template resulted in this sheet. It’s not bad, but I decided after looking at it that I didn’t want so many variations in brightness. 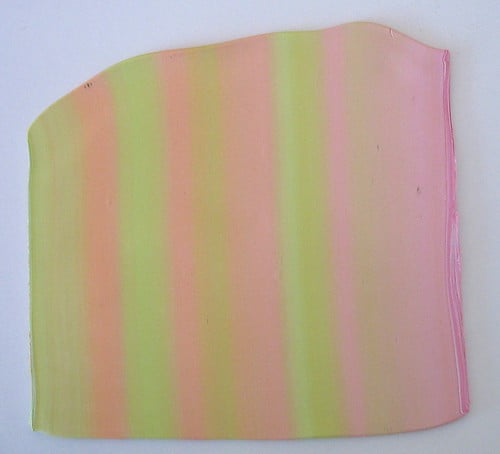 My second attempt took a traditional skinner blend between two of my color scheme colors (orange and pink), and combined them with a step blend from my template with the third color (green). I added a thin sheet of white clay to the back, so that the entire blend would be uniformly brighter than the straight-from-the-package clay colors.

Here is the resulting blend. I like this one better, but I think I lightened it too much.

I also am having trouble re-working these sheets into the canes I’d like them to be. Part of that has to do with the fact that I am not using enough clay to begin with. I plan to continue experimenting, and the three things I plan to try next are:

Once I turn this into the cane I want it to be, I have visions of letting it star in some of the ideas I sketched out in Judy Kuskin’s silver bezels seminar and Kathleen Dustin’s earring design seminar. What I really need to do is put the blend in silver bezels and make a pair of earrings out of them. Now that would truly be “synergy,” wouldn’t it?

9 thoughts on “They might be stripey or polka dot…”