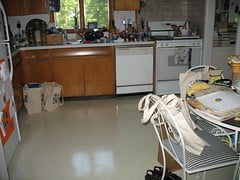 Yeah, I have my fair share of guilt at times, and so it is G in the Encyclopedia of Me.  Guilt when I have other plans the same time as a family party; guilt when I have too much business to do and can’t spend quality time with the kids or the husband; guilt when I have artsy things on my mind and am in such a frenzy of creativity that I don’t really want to spend quality time with them…  And guilt when all of my other endeavors cause me to have no time for keeping house.  While I know that in the grand scheme of things housework is really less important than time on the floor playing Uno, it’s still a necessary evil.  And when things get as out-of-control clutter-wise as they have in recent years, it impacts those other more important moments.  There have been times when there really was no place good to sit down and play Uno.  And the kids haven’t been able to have a friend over in more than a year!  And either have I, for that matter.  I feel really guilty about that.  And I go through decluttering phases and get parts of the house cleaned up, but I just can’t seem to see it through enough to get everything presentable at once.

Well, I’m doing something about that this week and next while I’m taking time off from my business.  My vacation actually started Tuesday afternoon.  The kids and I had a Burger King lunch, and then went out on the town for some errand-running, which included a stop at the pet store for some quality time sweet-talking the kittens, marveling at the colors of some of the more exotic fish, and wondering what kind of new friend we would bring home with us if we were going to do that kind of thing (which we weren’t).

Yesterday morning, I caught up on the laundry and then the boys and I went swimming at Grandma’s house with their cousins.  A fun time was had, and I came home somewhat pinker than when I got there.   We also went out for ice cream (Daddy’s idea) last night after a trip to the liquor store because (in Neil’s words), “Mommy needs a drink.” 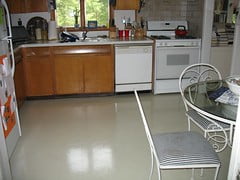 And today I am finally in a position to tackle the kitchen.  It took me an hour and a half to subdue the beast, but I did.  There are still dishes in the sink, but once the dishwasher is done running, I’ll move them over and be truly done.  One room down, 8 to go

Actually, I am working towards a greater goal than mere cleanliness.  I have a social agenda.  I don’t need to finish all 8 of those other rooms, but if I manage to do 4 of them I will consider myself to be in great shape for the social event of the summer: A+E’s 3rd Annual Water Party Extravaganza!  Or AE3AWP for short

Most of the invitations went out this morning, so there is no turning back!  Basically, we’ve invited a few neighborhood friends to play in the back yard in our kiddie pool.  It’s really more fun than it sounds, LOL!  The kids tend to stay on the grassy spot in the yard, while the moms hang out on the patio, and this year I decided we moms should have an activity, too.  So, I’m setting up some buckets of dye on the patio and we’re going to get artsy with some clothes.  It should be fun!  In the meantime, the kids and I have to plan a snacky summer menu, party favors, decorations, etc.  I’m looking forward to the prep as much as the party itself.

While G is for Guilt, I should clarify that I don’t spend my days caught in the throes of it.  It’s there, and it makes itself painfully known from time to time, but it doesn’t own me.  What kind of life would that be? And when guilt does take over, after it’s done making me feel bad, It does inspire me to improve, which is a Good Thing.

Now we have an afternoon of fun ahead of us – playdate in the park with E’s “favorite friend” that he hasn’t seen since school ended in June.  (Note to self: Why don’t I do this park thing more often?  No clean house required…)

2 thoughts on “G is for Guilt”