It’s been somewhat quiet in Blogland these last several days, but I have to believe there are a few of you out there still checking in, just as I have been reading a few long-time favorites, too – mostly via my tablet, from under my quilt, while next to a crackling fire.  Oh, I have such a rough life the week after Christmas, I know!

So for you who are poking your head in here this week, I thought I’d talk a little about one of the few handmades to make it under the tree this Christmas: Amigurumi Link.

Link, for the uninitiated, is the hero of the Legend of Zelda games, which have had a hold on my boys ever since they discovered Twilight Princess a few summers ago. 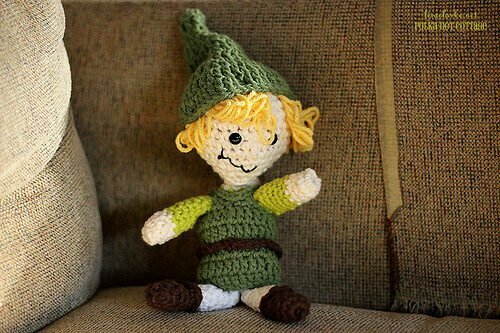 I made quite a few changes from the original pattern, not because I am some kind of crochet expert who thinks she knows better, but rather the opposite.  This was a really ambitious undertaking for me.  I’d never attempted amigurumi before, and there were just so many parts to construct! I started with less than a week to go before Christmas, and as I got closer to my deadline, I skimped in some places.

Most notably, I gave him looped yarn hair instead of crocheting his hair, and I skipped all of his accessories.

Somewhere around here is a medallion that I forgot to attach to his belt, along with a half-finished sword and shield.  I’ll finish them sometime, I hope.  (But first I really need to finish Aidan’s sweater. The poor boy has been waiting so patiently for that.)  In the meantime, the boys are happy with this Link doll as he is, and they were duly impressed that I made him.  It’s always fun when I can wow them a little!

This may very well be my last post of the year… I have all kinds of thoughts about how to re-organize my digital life for the coming year, and maybe I’ll be back to chat about that. Or maybe I’ll just keep it to myself. Sometimes those thoughts are really just too boring to write down, no matter how much fun I may have implementing them.

So on the chance that I am not back here until 2012, allow me to wish you a happy and healthy New Year!  Thanks for hanging out with me here for the last 365 days!