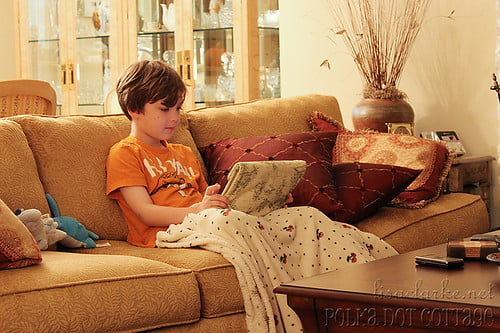 Ever since the days of the “Blankie O’ Love” this boy has been all about Cozy. Wherever he is, if there’s a blanket nearby, he’ll get under it.  (I took this picture at my in-laws’ house the other night, where he had easily made himself at home under Grandma’s blanket.)

He still thinks he is little enough to squeeze himself behind the crook of my knees when I’m sitting sideways on the couch, and I will continue to let him think that for as long as he wants to.

He gets up a few minutes early every weekday morning so he can get under my covers in my bed before getting ready for school.

He is all about the Cozy, this one.

It’s got me thinking, in fact.  (Dangerous, I know.)  After I finish Aidan’s sweater, I want to make something special for Eamonn.  Thing is, he really isn’t a sweater guy at all, and it’s been causing me angst, trying to come up with something to make him that is on a similar scale to a sweater, but that he will actually use.  Maybe instead of a sweater, he needs a cozy granny square lap blanket.  Ooh, yes, I think that would be perfect for him!  I can’t wait to ask him what he thinks when he gets home from school.

Although, I do still really love sharing my Blankie O’ Love with him, and he does have his own similar lap quilt that he keeps on his bed…  Maybe you can’t have too many lap blankets, though.  Can you?

My surgery went fine yesterday.  Thanks for the positive thoughts you sent my way.  I spent some time nauseous from the anesthesia, but I’m better now.  I’ll be taking it easy today, my Mom is coming over to keep me company and to pick up the kids from school, so that’s nice.  Tomorrow I expect to be back in the swing of everyday life.

Oh, and the best news of all is that I don’t have to be on “voice rest” as I had originally thought! It turns out the form letter they sent me didn’t really cover my own particular case very well, and the surgery they performed wasn’t anywhere near the vocal chords.  Good thing, since I’ve already had to yell at the kids twice since being home… geez.  It hurts when I swallow, but that should get better in a few days.

So, that’s that. They’re biopsying the papilloma to see what type of HPV it is.  My research (aka Wikipedia) tells me that it can only be one of five types, four of which are harmless, and one of which is a risk factor for cancer.  The papilloma itself, if I understand correctly, is benign by definition.  It’s just a matter of determining future risk.  Needless to say, I am pulling for one of the four harmless varieties, and I wouldn’t object if you wanted to think some more positive thoughts for me in that direction, too.  Many thanks!

3 thoughts on “This boy”