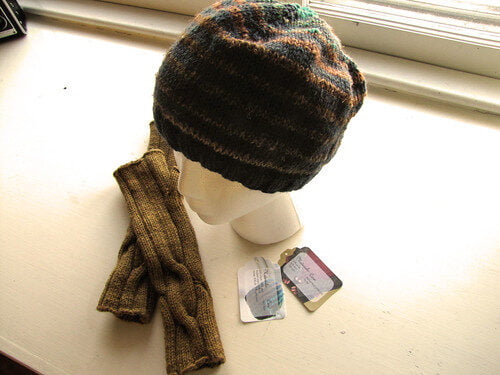 I’m trying to learn not to be so matchy-matchy.  I’ve been hearing lately that it’s very stylish to coordinate one’s accessories, but to match them? Not so much.

This isn’t an easy lesson for me, as you might imagine, being someone who has spent much of the last fifteen years attempting to exactly match the colors (if not also the patterns) of her favorite textiles in clay.  If you knew how many pairs of colorful earrings I have that look exactly like something that’s hanging in my closet, you’d probably gag.

I’ve really been thinking about this lately, though.  And I am not reaching for the red socks every time I wear a red sweater anymore.  Sometimes I think maybe the gold and gray striped socks would work better.  And a pair of green & copper earrings would be more effective than a red pair.  It really is true – it’s a much better look.  It’s a younger look.  I like it. 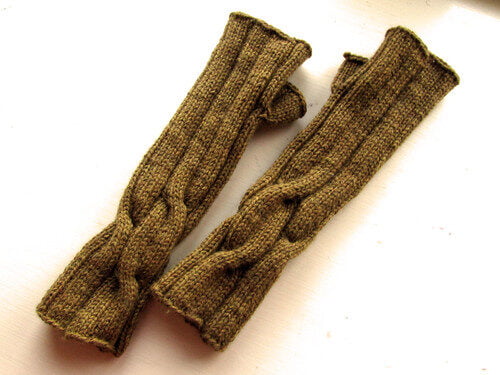 So I had that in mind when thinking about knitted gifts this Christmas.  I made my father a pair of fingerless gloves.  I was all set to use the exact same yarn on a matching hat, when I thought better of it.  Instead I decided to try something new, and knit up a striped hat featuring two separate yarns – a solid, and a self-striping – neither of them the same as the yarn I used for the gloves. 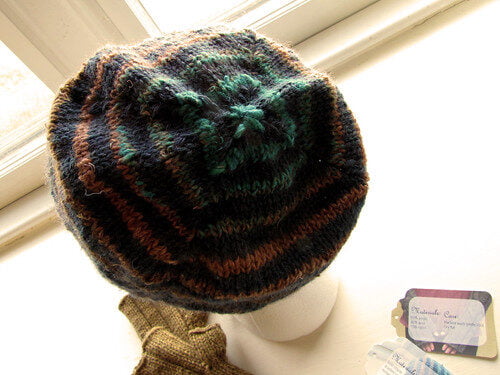 I could have used the same camel brown for the solid color as I did on the gloves, but in the spirit of coordinating not matching, I went a different route and chose a nice dark teal.  The self-striping yarn cycles through shades of light brown and teal, including a color that looks very similar to the one I used for the gloves.  The two pieces look really nice together without being the same.

Modifications: I went up a needle size

To be honest, the hat I gave my father is the second one I made.

This is the first.  I thought the bright teal stripe was a little bit too feminine, so now it’s mine, and Dad has the second one with much more brown in it.  Everybody wins!

3 thoughts on “Turn a Dashing Square”