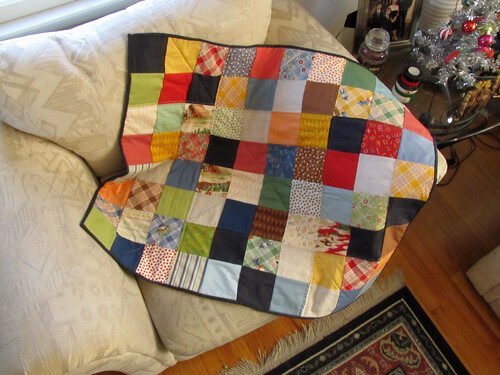 I was tempted to show you my experiments with my new macro doohickeys, or tell you about my new 365 Project for 2011, but I could feel the collective eye-rolling from those of you who really don’t care about photography.

I always get a little twitchy when I post too many times in a row on the same topic.  I imagine readers fleeing by the dozens out of boredom.

So instead, if you do like to see where I’ve been pointing my lens, I invite you to follow those links, and if you don’t, well, let’s indulge in a little something new.  Perhaps a sewing project?

Remember that American Jane “Punctuation” charm pack I was playing with a few months ago?  I’d had it in my mind then that it would make a nice crib/floor quilt for my new nephew.  Right away, I ordered a yard of one of the prints to use as a backing, and then naturally I waited until the week before Christmas to actually put it together.  Luckily, it only took me one entire day from start to finish.  (And now that I know I can make a quilt in a day if I have to, I may stop dragging my feet on the other quilt projects I have been poised to begin for over a year now.  Maybe.) 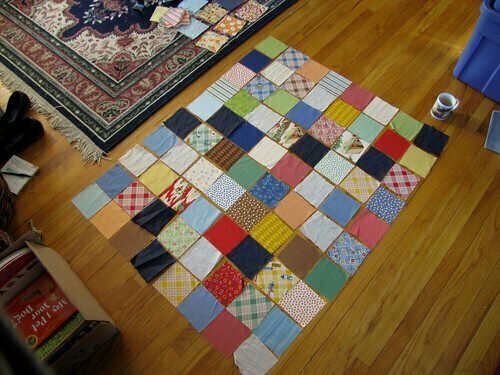 I began by spreading out my squares on the floor again.  I decided there were prints I didn’t like – anything in the black colorway, and the ticket-stub patterns – so I took them out.  I knew I needed more squares if the quilt was going to be roughly 45×36, so I dug up some other American Jane charm packs I’d been hording (Snippets and Happy Campers) and spent two hours arranging squares.

Seriously, two hours.  It takes a long time to make this kind of thing look totally random, you know.

I made sure no two squares of the same color or pattern were adjacent to each other, and then I added some solid linen squares (in navy blue and natural) being careful that they were equally-distributed among the rows and columns.

I sewed all of the squares together, and then took out the yard of green alphabet fabric I was going to use for the backing.  The only problem? The shop I bought it from accidentally only sent me 1/2 yard.  Not wanting to wait for them to send me another yard, I got creative and added some linen panels to the 1/2 yard and made a four-part backing.  I think I like this arrangement better than the solid piece of alphabet fabric I was originally going for. 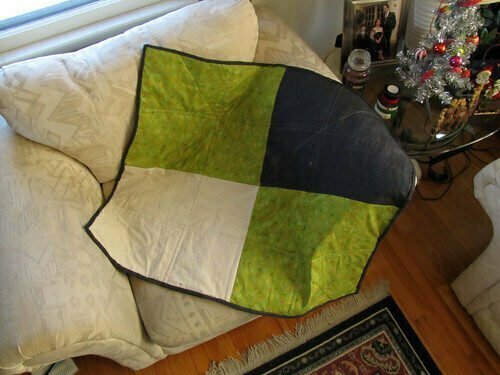 When I started this, I had planned not to bind it, or to quilt it.  I was going to tie it together at intervals like these lap quilts I’d previously made.  But somewhere along the line I decided to machine-quilt a simple straight-line pattern.  And that led to binding it in the navy blue linen.  Another change to the plan that I think made a better final product than what I’d had in mind.

Here’s to veering from the plan!

I used a super soft cotton bamboo fleece for the batting.

I thought I had snapped a few photos after I’d hand-sewn the binding, run the finished quilt through the washing machine and gotten it all deliciously crinkled, but it seems I didn’t.  And now it’s safely in the hands of my nephew and his parents, so I guess you’ll have to take my word for it that, yes, it was deliciously crinkled.

By the way, the same day I made this quilt, I was overtaken with a case of temporary insanity and decided that I needed to make two more, twin bed size, for my own boys.  Instead of charm squares, I ordered layer cakes, which feature squares 10-inches wide instead of 5-inches.  And rather than a mix of American Jane, I chose just one collection: Happy Campers.  There’s a lot about those patterns that say “boy” to me without saying “baby boy” and that’s not an easy thing to find in a fabric collection!

Someday I’ll show you those quilts.  I have to actually make them first.  We keep talking about getting bunk beds for the kids, and when we do, they’ll need new mama-made quilts to celebrate.  Right?  In the meantime I have to avoid being tempted by more of those yummy vintagey American Jane precuts.