Neil says in the 14 years we’ve been married, that I’ve gotten weirder.  The term “flickr freak” was bandied about.  As you can see, my finger is on the camera trigger.  I should point out that I wasn’t insulted by that comment, and that Neil is not exactly the most normal person I’ve ever met either.  We are well-suited to each other in our oddballness.

I wrote this post last night, in my head, while lying in bed after midnight.  I made a deal with myself that if I were still awake at 1:00, I’d go downstairs and type it up – no point in wasting precious time waiting for sleep that won’t come, right?

I’m blaming caffeine for my little bout of insomnia.  I’ve become more succeptible to it’s stimulant properties as I’ve gotten older.  I’ve been having very little caffeine lately (especially since giving up my Dr. Pepper iv drip for Lent) but yesterday I went completely caffeine crazy without even thinking about it.  At least, I didn’t think about it until after midnight when my body was so sleepy and my brain would not stop bouncing from subject to subject like a hyped-up schoolgirl. 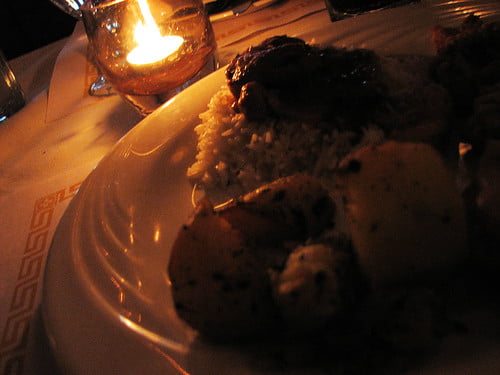 Yesterday morning, I treated myself to a Peppermint Mocha Frappaccino.  Caffeinated drink #1.  Then in the evening, Neil and I went to an Indian restaurant for our anniversary, where I skipped the authentic beverages in favor of a tall, cool glass of Coke.  Caffeinated drink #2.  Before leaving the restaurant, I had a cup of coffee (which, by the way, was delicious – I think there may have been some Indian spice of some kind in it).  Caffeinated drink #3.  And lastly, while watching LOST, I uncharacteristically decided to brew myself a cup of coffee.  I normally drink decaf at home, but I’d just bought a chocolate truffle variety I wanted to try, so caffeinated drink #4.  And none of this occurred to me until it was far too late.

One thing I learned last night: counting caffeinated drinks is not as effective as counting sheep supposedly is.

My mind hopped from topic to topic, including (but not limited to)

Today, I’m laying off the stimulating beverages.  Right after I finish this cup of chocolate truffle coffee.

11 thoughts on “Incoherent ramblings of a caffeinated mind”