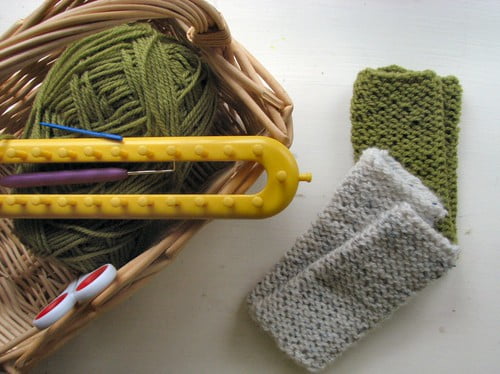 Shortly after my first successful pair of loom-knit fingerless mitts, visions of fingerless Christmas gifts started dancing in my head.  But first, I wanted to get a couple more practice pairs made, so that I could experiment with another stitch or two.

I made these two pairs for the boys.  The blue 24-peg Knifty Knitter loom I used for my own produced too wide of a tube for their skinny little arms, so I used 18 pegs of the yellow long Knifty Knitter.  The benefit of that was the slighly smaller gauge, which allowed me to knit with just a single strand of the yarn.  The downside was that it resulted in a panel, as opposed to a tube, and had to be sewn together.  Not a big deal, once I figured out the best way to finish it off so that it wouldn’t unravel, but I do really prefer the look of the tube.

I wanted to try to eliminate the curling effect of the stockinette stitch, so I did these in the garter stitch.  I was happy with the way they turned out, and decided to try the same stitch on an adult-size pair.  I went back to the blue loom and the double strand of yarn, banged a mitt out in one evening, and decided it was too ugly even for the camera.  Poor ugly little mitt.

So here’s what I’m learning:  (And if you are an experienced knitter and know otherwise, I encourage you to correct me!)  It seems the stockinette stitch, produces a long, narrow fabric, as opposed to the fatter, shorter fabric of the garter stitch.  I liked the garter stitch in the kids’ mitts, but I really don’t like it with this round large gauge loom.

I still have visions of making mitts for all of those hard to shop for men (and some ladies, too) on my Christmas list, but now I’m thinking that I either have to upgrade to a grown-up loom, or just deal with the curl of the stockinette stitch.

Or I could just go with the smartest idea yet: don’t loom-knit Christmas gifts at all this year.  Wait until next year when I’ve got some experience and wisdom under my belt, and actually know what I’m doing!  That might make entirely too much sense, though, to be a viable option…

3 thoughts on “Lessons in knitting”