In the Encyclopedia of Me, K is for Kaleidoscope. I still remember the blue cardboard kaleidoscope I had as a child. I enjoyed turning the cylinder at the end, making the colorful little bits move, and creating beautiful repeating patterns of color. I have to admit I haven’t thought about that little kaleidoscope in many years, but recalling it now, I can see that my interest in patterns and color goes way back. Who knew?

I have been playing with polymer clay for over 11 years, experimenting with several styles before settling into a niche as a cane-maker. This is really where my love for the medium lies. I am not particularly fond of making canes that are meant to look like specific objects. I’m happier creating fabric-like repeating patterns (is it any wonder, then, that I should be drawn to sewing at this point? Given that I get the most joy out of my clay when it is mimicking a textile, it seems my fascination with real honest-to-goodness fabric was really inevitable. It was only a matter of time…). I hope to make more kaleidoscoping patterns in the near future – it’s fun, and produces such spectacular results.

If you are a kaleidoscope fan and a polymer clay enthusiast, I can’t gush about Sarah Shriver’s Intricate Kaleidoscope Caning enough. I’ve seen her work in person (bought a pair of earrings from her, actually) and it’s jaw-droppingly gorgeous. My things look nothing like hers – which is as it should be, really – but I learned a few things from this video, including some Skinner Blend tricks that never really occurred to me before. And before I start sounding too much like a commercial, I will say, K is for Kaleidoscope, and move on.

Speaking of fabric and sewing… you had to know I was going to have another show-and-tell, didn’t you?

Yesterday I told you that I had made two skirts and a shirt for me, and a pair of shorts for each of the boys (I took in that bowling skirt tonight by the way, much better now – I’ll probably wear it tomorrow). What I didn’t mention was that I had this tote bag/messenger bag hybrid idea percolating in my mind, and that I was likely to sit back down and make the day even more prolific sewing-wise. Well, I did, and then I did. 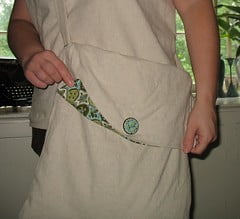 I’ve been using some “clowny” bags lately, to borrow an adjective from my oh-so-fashionable 7-year-old. This is the boy who wears striped polo shirts with camouflage pants, but I digress… I really needed something plain to use when I wear my more “busy” skirts, plus I was interested in having something I could wear diagonally across my chest so I could go hands-free. I wanted a flap so it could close, and lastly, I wanted to add some pattern and color to it, but in a subtle way.

After a logistical nightmare of figuring out when I should put right sides together vs. wrong sides together, and just how I was going to do all of this without ending up with an inside-out bag that couldn’t be turned rightside-out, I finally figured it out. But woe to the husband or child who tried to interrupt me with an innocent story while I mulled over my stitching strategy. I need a sign: Do Not Disturb the Mommy Beast Whilst She Deduces and Ponders Logic. Seriously. I enjoy logic problems immensely, but leave me alone while I’m thinking or I’ll lose my place and get seriously crabby. Seriously. 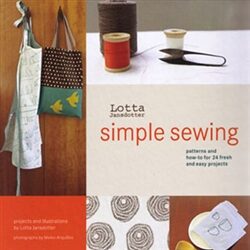 So, a little credit where credit is due: I combined ideas from the Artsy Clutch project in Amy Karol’s Bend the Rules Sewing and the Simple Tote project in Lotta Jansdotter’s Simple Sewing. The lining fabric is from Michele D’Amore’s Bleeker Street collection, one other pattern of which I used on one of my favorite skirts. (I’m looking forward to using the leftover scraps in some project together sometime, somewhere…) The button is one of mine. It’s a Swamp Calico design, and there’s one more available in the shop, if you want to be just like me and have one of your very own (and really, who doesn’t?). Oh, and can you keep a secret? The button, while it is sewn on to the bag, is not actually functional in this case. Hidden behind the button is a snap closure. Just my way of avoiding learning how to make button holes

I really should just end this here, but I’m feeling chatty. You’re invited to keep reading. Unless you’re bored of me at this point, in which case you are invited to go read somebody else’s blog. Or take a nap and come back later when you can appreciate my witty prose

For the rest of you:  I was reading some more Artful Blogging tonight by the light of the citronella candles, amid the sounds of children splashing in the kiddie pool and a husband beheading the daylights out of some weeds that dared to grow up along our retaining wall. Perhaps those were odd activities for dusk, but I got tired of being in the house and thought maybe the kids would sleep better tonight if they had a chance to burn off some energy before bed. (I wish it had worked – they were still awake, an hour after we tucked them in, fighting over a stuffed cat named Pounce.) Regardless, it was nice to do something different after supper, and I got to read up on a few more crafty bloggers that I want to add to my Google Reader. Like I need that.

One thing that stuck with me was Artsy Mama‘s tea party. A date was picked, an invitation was posted, and on the appointed day, people all around the world had a cup of tea and blogged about it, sharing images of their cups & saucers, of their tables set with shortbread cookies and other delights, and of their steaming kettles. It reminded me of my college days. We used to have a tea party every Friday in our suite. It was BYOM (bring your own mug) and anyone was welcome to attend. It was such a civilized little gathering, at a time of life when so many people would have been off preparing for that night’s keg party. I appreciated having friends who were more into sharing a little hot water, good music, and friendly conversation than they were into guzzling beer at 2am. Maybe it made us strange, but I liked it that way. So much so, that after I graduated, I continued the Friday afternoon tea at my desk job. I’d put on a little Tchaikovsky at Tea Time

, put out some cookies or my famous Pumpkin Bread, and invite my coworkers to bring a mug and congregate at my desk for a 15 minute interlude. I miss those small social moments. If I could invite friends over these days for a Friday afternoon tea, I would. But my friends come with noisy little satellites bent on helping my own two asteroids wreak havoc on the universe that is our family room. There would really be nothing peaceful or civilized about tea time right now. Perhaps when their children are old enough to stay home, and mine are old enough to stay upstairs, wanting no part of Mom’s silly little girly party, I’ll give it a whirl. The online tea party, though… that is an idea that deserves mulling over. I find it appealing.

If my bottom weren’t so firmly entrenched in this couch cushion, I’d have gone upstairs to photograph my great-grandmother’s green glass tea cup, full of a steaming brew, and used it to illustrate that last paragraph. But hey, it’s late, and I’ve been posting this entry for at least an hour and a half now. It’s time to turn the chatty switch off, read a few of my favorite blogs, and turn into a pumpkin. And if you’ve read this far, kudos to you! Personally, I’d have stopped reading once the pictures stopped

Until tomorrow, my friends…

8 thoughts on “K is for Kaleidoscope”