In the Encyclopedia of Me, B is for Borrowing Ideas. Last night I made this nifty skirt. It’s in Alexander Henry’s Birdseed fabric, using the trusty A-line elastic-waist skirt pattern I made from Sew What! Skirts: 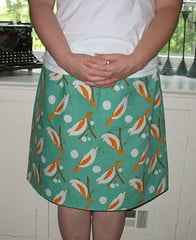 I borrowed the idea from squid37, whose version I saw in the Sew, Mama, Sew flickr group: 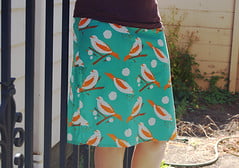 Squid37 borrowed the idea from Green Kitchen, whose version she saw in the Sew, Mama, Sew blog: 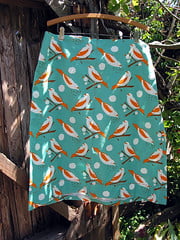 B is for Borrowing Ideas.

And while I’m on the “borrowing ideas from people who borrow ideas” thing, I also made some shorts for son #2 last night. When he saw me cutting the fabric for the skirt, he got really into it and decided he wanted me to make something for him, too. Hence the shorts. A few weeks ago, I was reading Karyn from Trail Mix Designs’ nominations for “Rockin’ Girl Bloggers” and she mentioned The Sky is Pink, who was making shorts from a tutorial at Handy Home Projects which caught my eye [roundabout enough for you?] The tutorial explained how to use a pair of existing pants to make a pattern. I tried it with some of the boys’ Old Navy boxer shorts, and made them the Ultraman pants I posted about before. They really love those crazy pants, so last night while son #2 was sleeping I whipped up a pair of bird pants and left them on the end of his bed so they’d be there when he woke. After a brief stint of wearing them on his head, he put them on the right way and has been wearing them ever since.

It feels like I’ve got a thousand things to do today. I am determined to get a HUGE batch of shipments out the door by Monday, plus I’ve got a NJPCG meeting to get ready for tomorrow, a picnic with friends to make a Summer Fruit Crisp and Pine Nut Salad for today, and dinner with my in-laws on Sunday. Add to that some quality time with son #1, and all of the crafty things I was hoping to do, and my head is spinning. I have to stop thinking of my sewing or my jewelry-creating as things to be accomplished for particular occasions. If I could just plan to make “a necklace” instead of plan to make “a necklace to wear on Sunday,” that would be a big help. It would certainly take off some of the pressure! That kind of thinking just doesn’t work when there are a lot of other (more important) things on the to-do list. It just stresses me out. 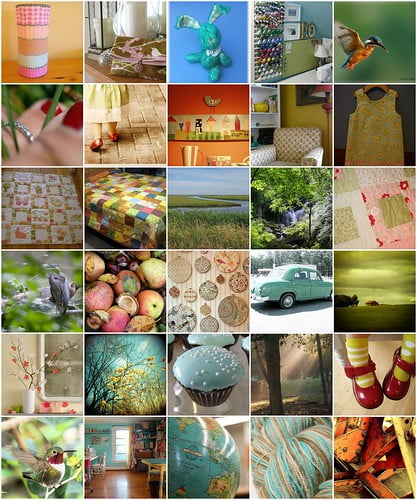 You can click on the image to find out more about where the individual images come from. Seems like I was drawn to birds this week, both in flickr and in fabric. Two hummingbirds and a heron found their way into my favorites. Maybe B is actually for Birds…

10 thoughts on “B is for Borrowing Ideas”