For the first two years that we lived in this house, I had a room of my own. It was a very small room, but I was able to fit a twin bed in there (in case we had a guest), a small desk, and a pair of short dressers. I used the desk for all of my creative endeavors, which were numerous, but mostly involved polymer clay. This fine arrangement lasted for roughly two years before I had to give up my cozy little art space to a screaming infant who demanded somewhere to live. He was soon joined by another screaming infant, and together they inhabited my craft room until the younger of the two moved down the hall to invade his father’s office space.

The screaming infants are no longer infants, nor are they screaming (for the most part), but they do still inhabit our previous craft and office spaces, two decades later. For the last twenty-two years, when I have wanted to make things that require dedicated table space, I have used the dining room.

The word “used” doesn’t adequately convey the impact I have on this space when I am in the midst of a creative burst. It starts off all nice, with my supplies spread out neatly on the table, but it eventually turns into a disaster area. Clay and supplies everywhere.

Part of the problem is inferior storage. It’s difficult to get everything I need out of the overflowing cabinet, so I just never put things away. It’s easier when everything is at my fingertips like that, but it’s really hard to look at.

So last month my in-laws moved to a new house, and they gave me their computer desk, which they didn’t want to take with them. At first I was skeptical that this desk could save me from myself, but I decided to give it a chance. And I decided that I’d have a much better time of it if I sorted through my supplies and got rid of anything I was never going to use again. 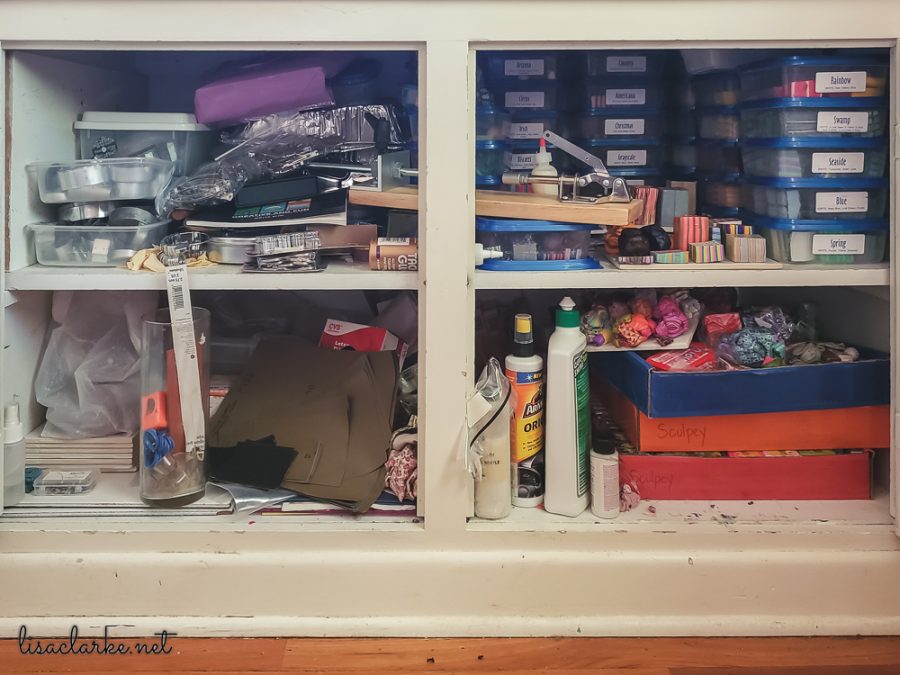 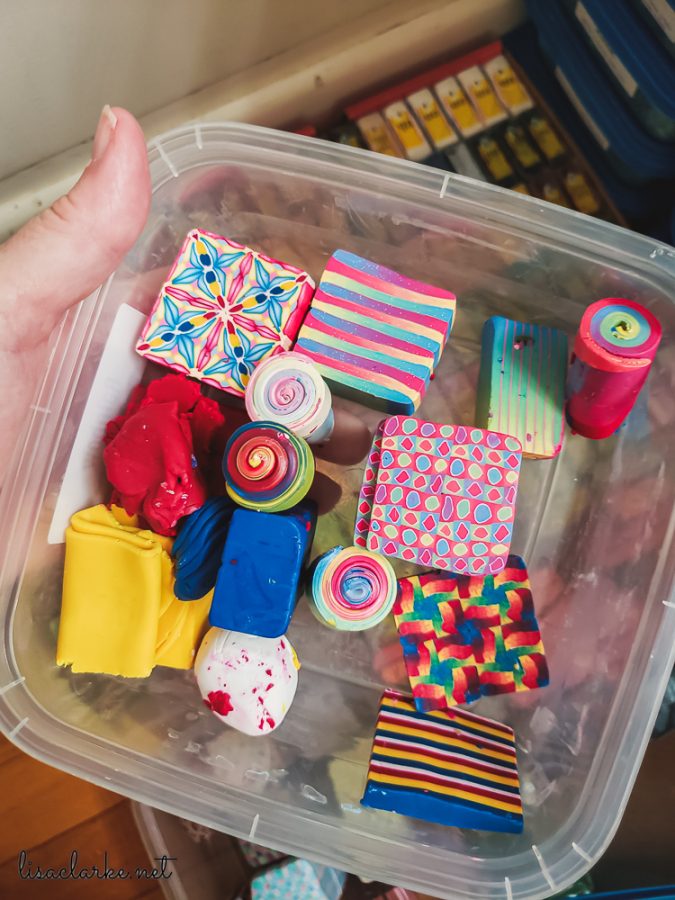 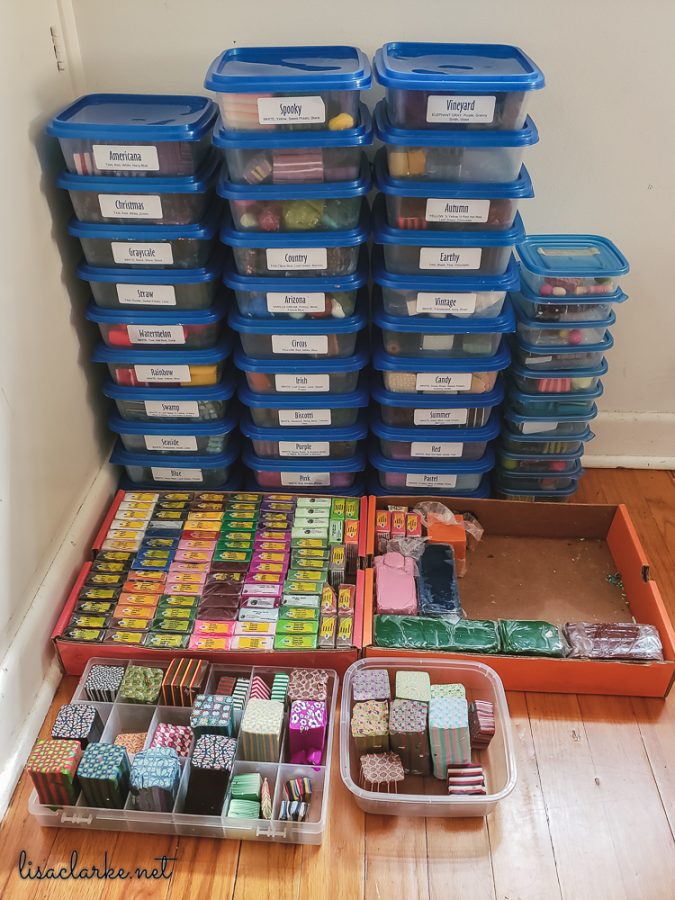 This built-in cabinet in the dining room holds most of my polymer clay and supplies, and it was half full with Sculpey III canes and unopened packages of Sculpey III, neither of which I have used in a decade! I have never liked the idea of throwing this stuff away, but I finally had an ah-ha! moment last month and took to Facebook to offer it for free to anyone who could cart it off.

A local Girl Scout leader came by two days later and relieved me of it. Phew! With all of that prime real estate freed, it was surprisingly simple to organize my storage and make things accessible once again. 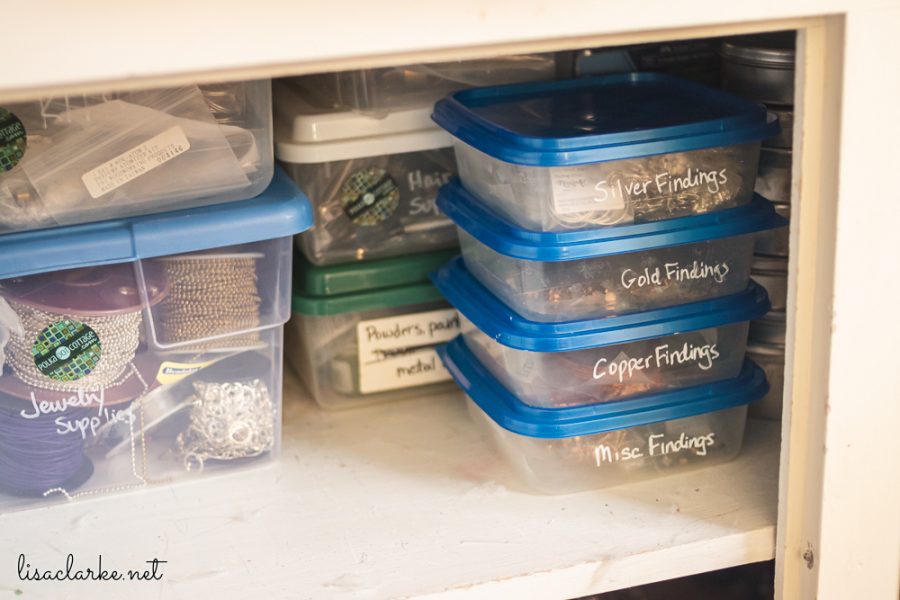 I remembered an odd array of metal findings and beads I had dumped in the basement way back when, and I spent a Sunday sorting through what I found there plus what I had upstairs. I discovered that I had an awful lot of duplicates of things I’d forgotten I purchased. Oh, the money I have wasted over the years on clasps and ear wires! So, now it’s all sorted. Silver, gold, copper, base metal – each in its own small container, easy to find and actually use. 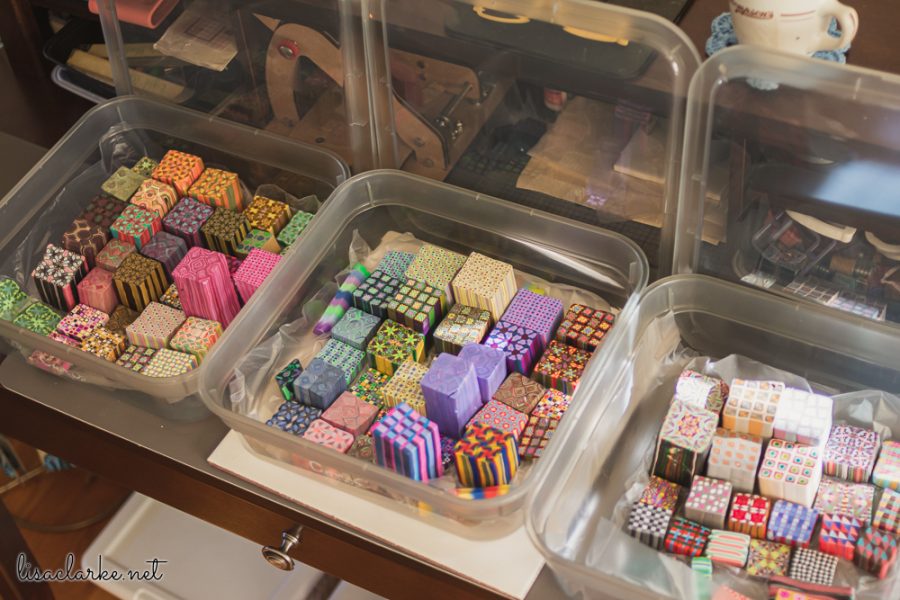 Speaking of small containers, I bought a couple of plastic tubs from Target, and gave my millefiori cane collection some room to breathe (and grow).

And I’ve also changed my relationship with scrap clay. I’ve always just kept a single pile of scrap and added bits and pieces to it while I work. But in doing that, I’ve found that I rarely use that pile for anything. If I grabbed a hunk of leftover bits and blended it to a single color, it would be gray. Maybe it would be a slightly greenish gray or blueish or purplish, but it would be gray nonetheless.

In many of the pieces I make, the scrap clay I use is visible on the back of the piece (think earrings, pendants, buttons, and shawl pins, all with solid-color backing). Usually I don’t want those backings to be a boring gray, so I’ll open up a brand new package to get a nice color to use. Not only does this leave my muddy gray scraps languishing unused, it also means I open a lot of fresh packages of polymer.

So now I’ve started doing what I should have done years ago: I’m sorting my scraps by color. And as I generate a new hunk of scrap clay, I blend it to a solid color immediately. (I have always wanted to work this way but I never have, for some reason. Duh! Why not??) I’m using one of those new Target tubs to store these colorful odds and ends. This has worked really well, because I have a nice collection of non-gray leftovers to work with, and I can keep re-using my scraps by blending them into other scraps of similar colors.

It’s been a great way to work so far. I still have the monster scrap pile stashed away for products where the color doesn’t matter (I use scrap in crochet hooks and pens, for example, but it’s never visible). As my colored scraps get more and more diluted, they will probably end up a part of that big muddy pile, but it will take a while, and until then, I will have eked as much colorful usage out of them as possible.

This whole rethinking of scrap has made me feel more virtuous, but it’s also had the added benefit of preserving my clay supply. I have only opened two new packages of clay in the last month. And that’s because I needed a real red for a Christmas Sweater Ornament. Otherwise, all of my colored scraps have been sufficient for my needs, and I’m generating more every day as I work. 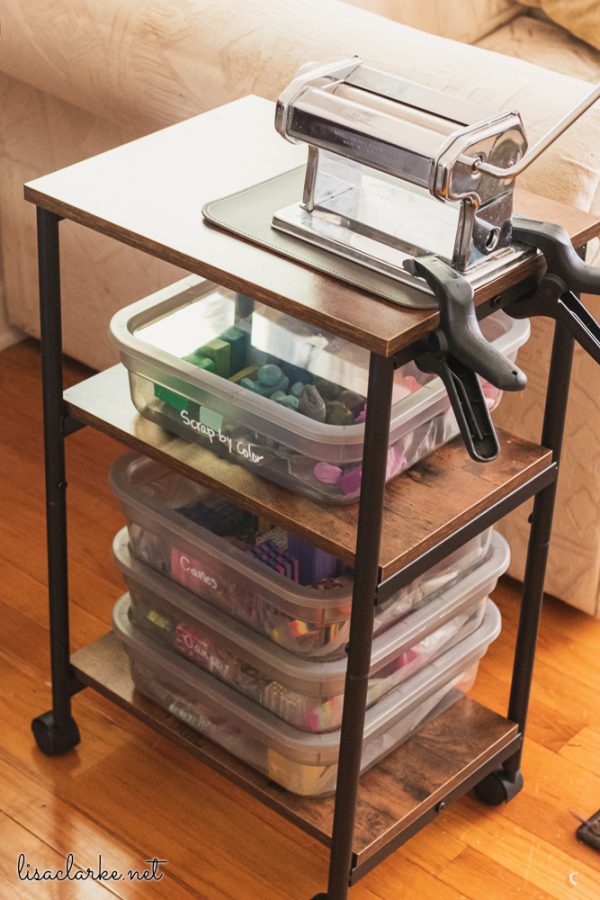 In addition to the four new tubs, I also purchased a rolling cart for my pasta machine. As it turns out, the edges of the desk are not friendly to clamps, and I need to clamp the machine down, or it will move all over the place as I try to use it. The tubs live on the shelves under the pasta machine, and the whole thing can be rolled and tucked nicely next to the desk for storage when I’m not actually using it. 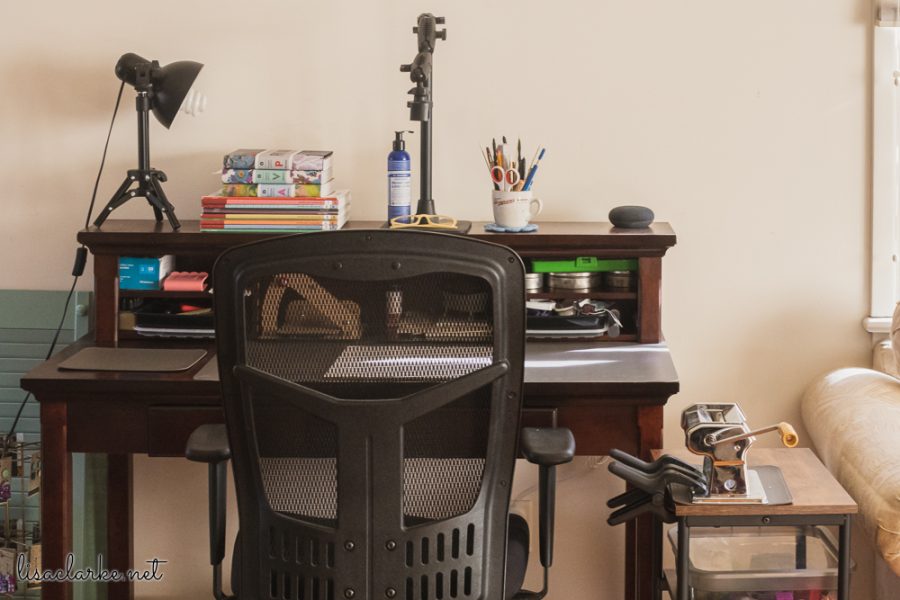 This little desk has inspired some serious cleanup, and having everything within reach and easy to put away, has made me more prolific than I have been in a long time. I can sit down, make a couple of pieces on my lunch hour, or after work, and then put away all of the supplies I used, keeping the area nice and neat. “Nice and neat” is kind of a new concept for me 😜

8 thoughts on “Better Making Through Hand-me-Downs”