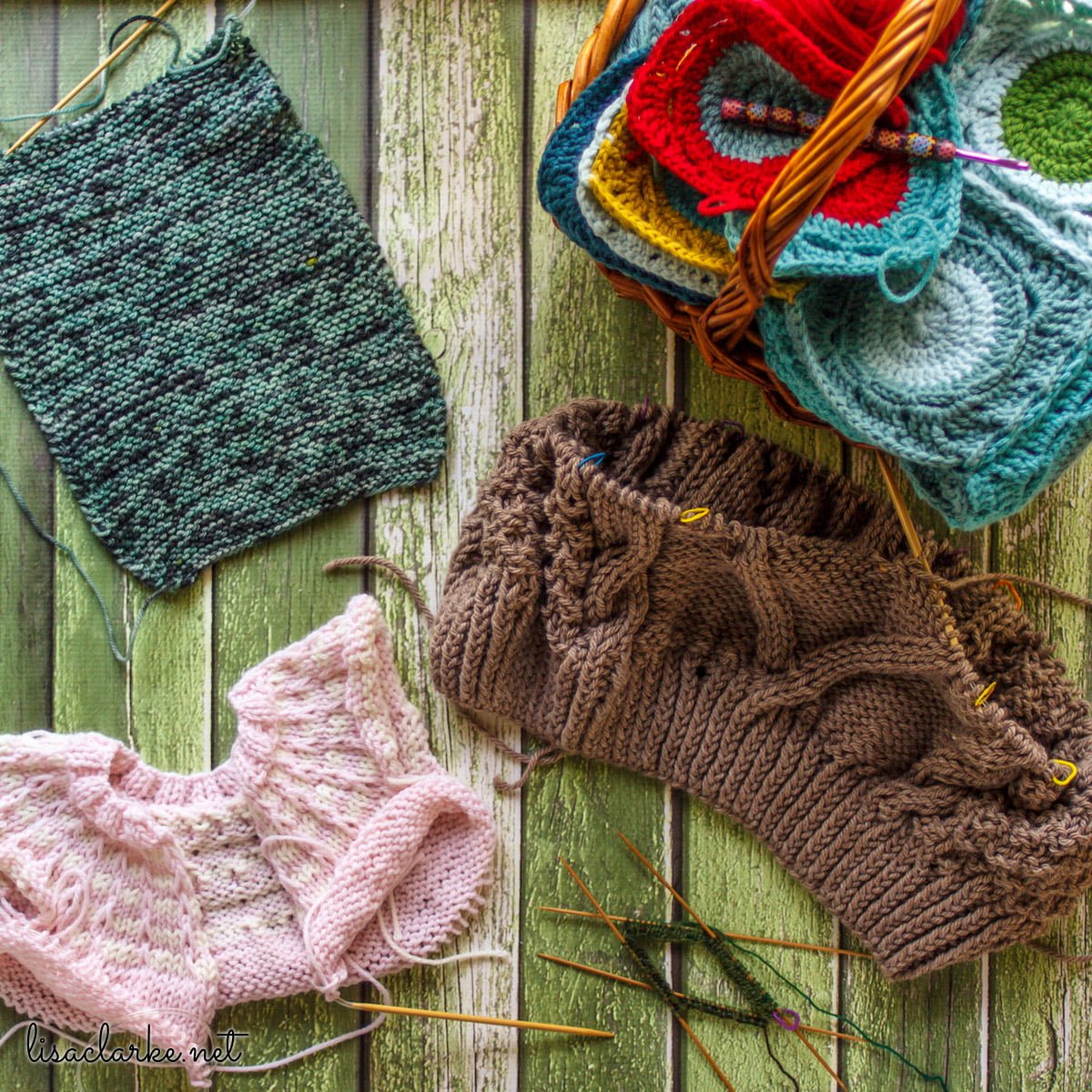 I am not one of those people who generally has a million knitting or crochet projects going at once. I tend to focus on one Big Thing at a time. Sometimes there is another project in progress, waiting for me to run out of yarn for the Big Thing, or to lose interest in the Big Thing for a few days. It’s rare, though, for me to have more than two active projects.

Right now? I have five. FIVE!

Want to see what I’m working on? 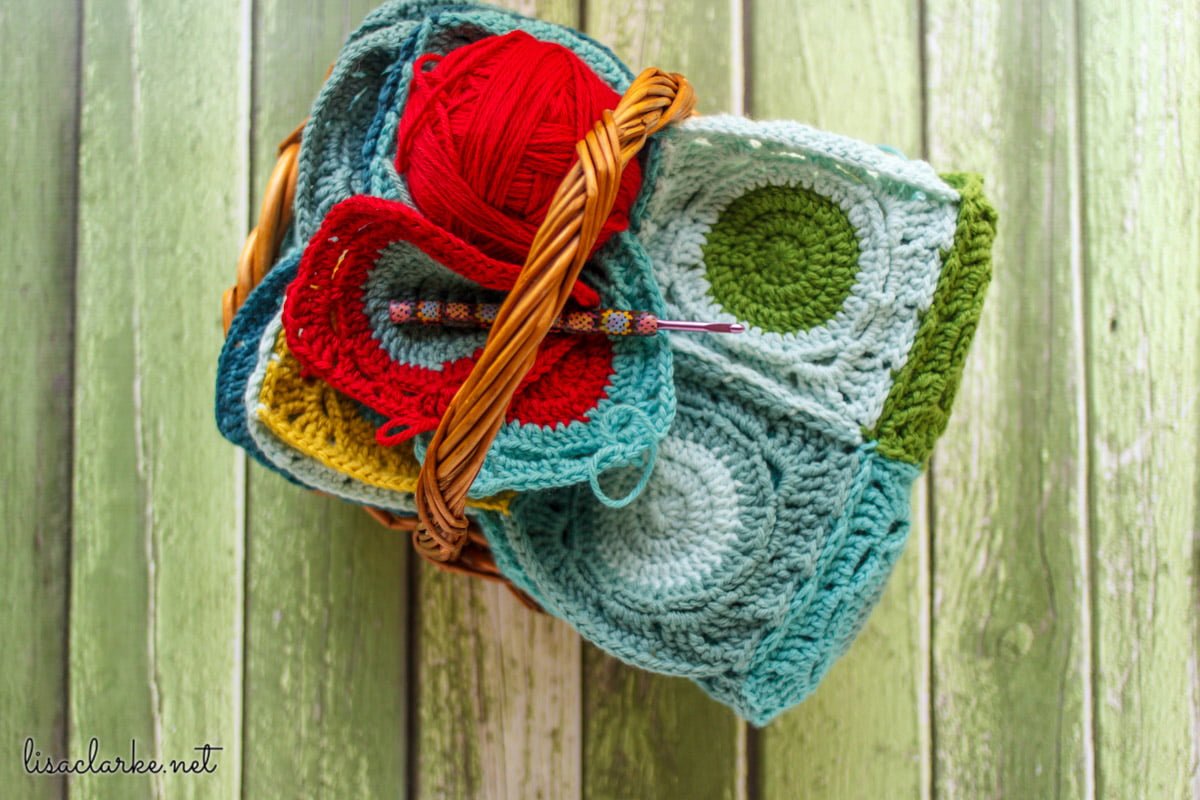 First up we have a crochet blanket. I started this one months ago, and I call it the Family Room Squircleghan. It’s my own design, and it will become a downloadable pattern one of these days, if I can ever bring myself to finish it.

It’s one of those things that sits in a basket next to the couch, waiting ever so patiently for me to pay some attention to it. I’m probably about 1/4 of the way through, and realistically, it will probably be Winter 2016 before I really focus on it with any intensity again. 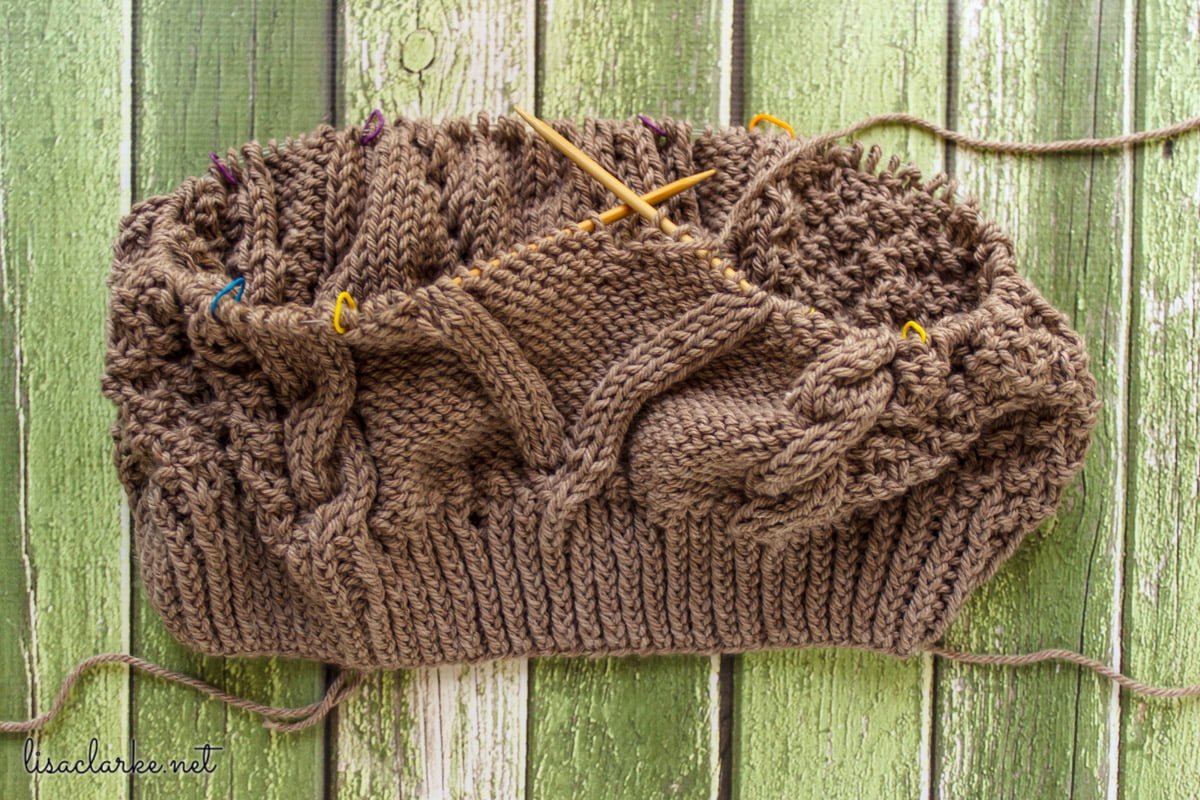 Next is a sweater for Neil. Yep, you read that right. My husband, who has always been anti-me-knitting-him-a-sweater has finally gotten chilly enough to agree to it. Heh.

I narrowed down the pattern and yarn choice to a few options, and let him make the final decisions. What we ended up with is a pattern called Wash’s Sweater. It’s a cabled pullover based on one that was worn by the character nicknamed Wash in the Firefly series. We didn’t choose it because of its nerdy origins. That was just a perk 😜

The yarn is leftover from my Aidez (which means, we are both going to have cabled sweaters in the exact same yarn – I sense a Matchy Matchy Day coming on – whee!). I ran out of what was in my stash, otherwise I would still be working on this, and it would be my one Big Thing.

The chunky yarn works up very quickly. I love it! I think I’m going to be very happy with this sweater when it’s done, and hopefully Neil will be too. For the time being, though, I am waiting for more yarn, and while I do… 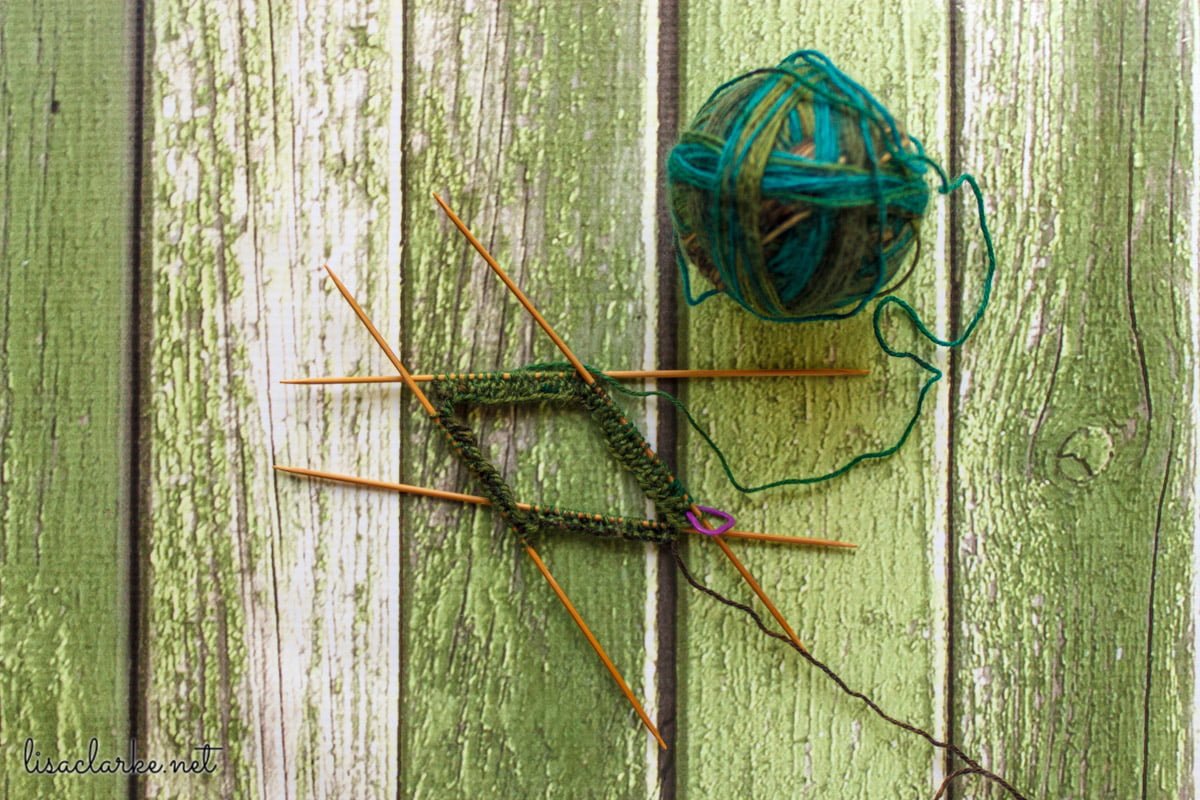 Project #3. This came about after a night where I tried to cure my insomnia by shopping for yarn in bed on my phone. It didn’t really help, but I ended up with a ball of sock yarn in the process.

If you’ve been paying attention to my knitting and crocheting over the years, you may have noticed that I am almost entirely a worsted-or-higher kind of girl. My stash is 95% worsted weight. My favorite needle is a #7. I just don’t do sock yarn. And yet…

I’ve started these socks four times now, and have unraveled them in frustration three of those times. I think now I finally have the right needle size and the right method going. I just kinda hate knitting them. I’m not really using a pattern for these. I’m just winging it, and grabbing information online as I need it. Will I finish? It’s anybody’s guess, but I suppose it’s no surprise that I’ve already cast on something else to work on. 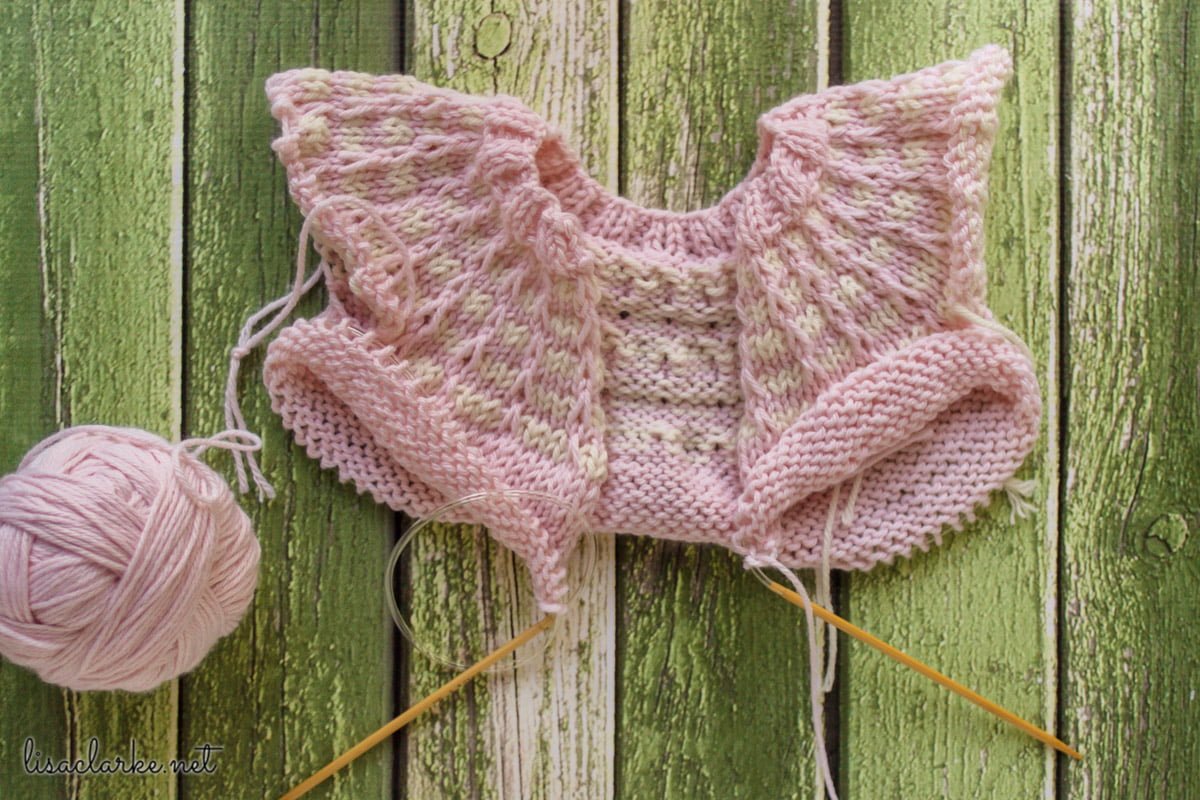 This is a little sweater prototype of an idea I had while dozing off a few nights ago. It’s my go-to style (top-down round yoke) but this time it features colorwork. The pattern is achieved through slip stitches, and with this color scheme (pale pink and white) it is very subtle. Once my tiny prototype is successful, though, I plan to try it grownup size, and use a more striking color combination.

This, too, will be a downloadable pattern sometime, assuming it all works out the way I envision it. 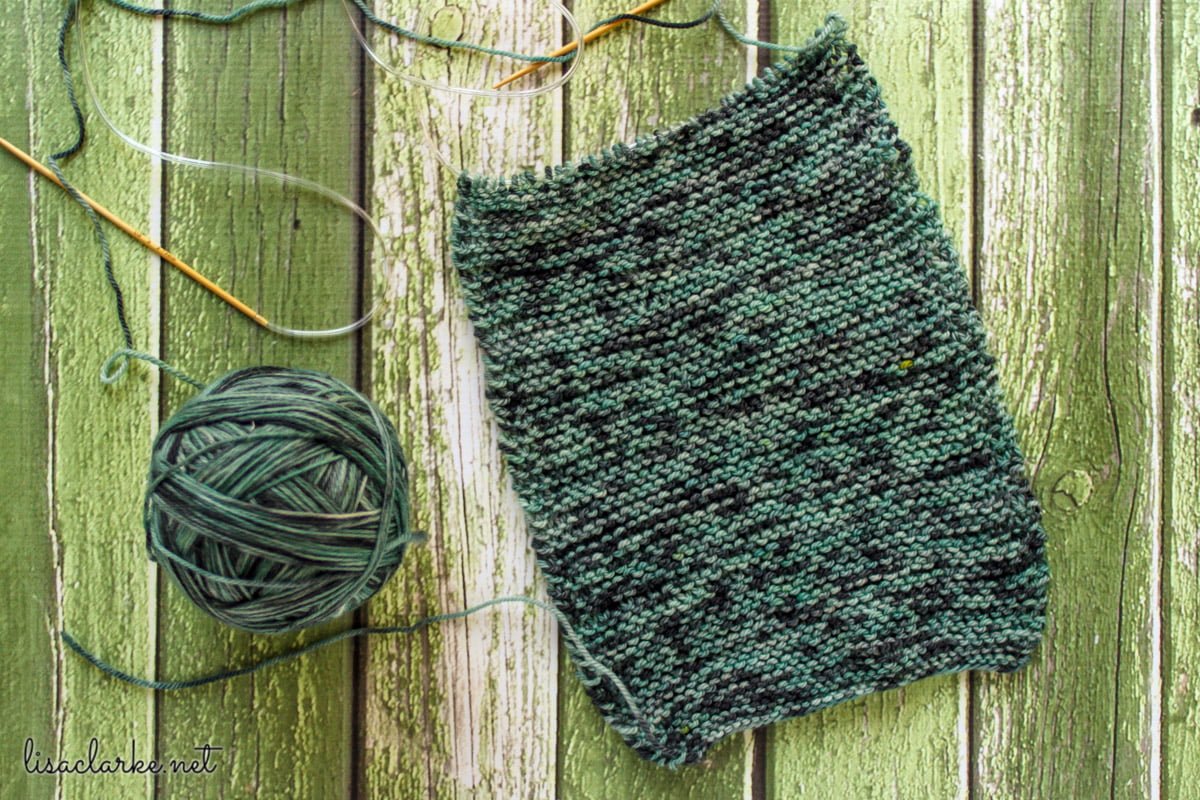 I bought some yarn at the NJ Sheep and Fiber Festival this weekend. It was superwash wool, in a colorway called “Aidan’s Night.” Well, that seemed a little hard to resist, especially because I thought the colors were actually something that would appeal to my Aidan. The only difficulty is that he has repeatedly told me he doesn’t want me to knit him anything. (” Knit stuff is too yarny-looking,” he says.)

So I got home from the festival with my treasured hank of Aidan’s Night, showed it to him, and optimistically asked what he wanted me to make. He did like the colors, but he didn’t know what he wanted (see above re: he doesn’t want anything). I looked all over Ravelry for ideas, asked on social media, etc, but nothing grabbed him.

Eventually he said, “knit me a rectangle.” A rectangle? Yeah. A rectangle. When I asked why, he said he could use it a few ways: as a giant coaster for setting multiple iced coffees on top of his desk, as a wall hanging to be used as a backdrop when he records YouTube videos…

So I’m knitting the wise guy a rectangle. And I am making it the world’s simplest rectangle to knit so that I can work on it an an extremely mindless fashion. I intend to keep going with this rectangle until I run out of yarn, or until it seems like a good length for a scarf. He has yet to agree to wear a scarf, but that’s just a minor detail 😉

So that’s all that I’ve got in progress right now. And it’s more than enough, frankly.

I’m mostly focused on that little pink cardigan right now, but when my yarn order comes in, I’m probably going back to Neil’s pullover. The rectangle is a good thing to take with me for waiting rooms and places where I can’t spare the brain power, and the socks? Well, I don’t know if they will ever get done. But I hope so.

How about you? Do you have a lot of things going at once, or are you mainly monogamous with your art/craft?