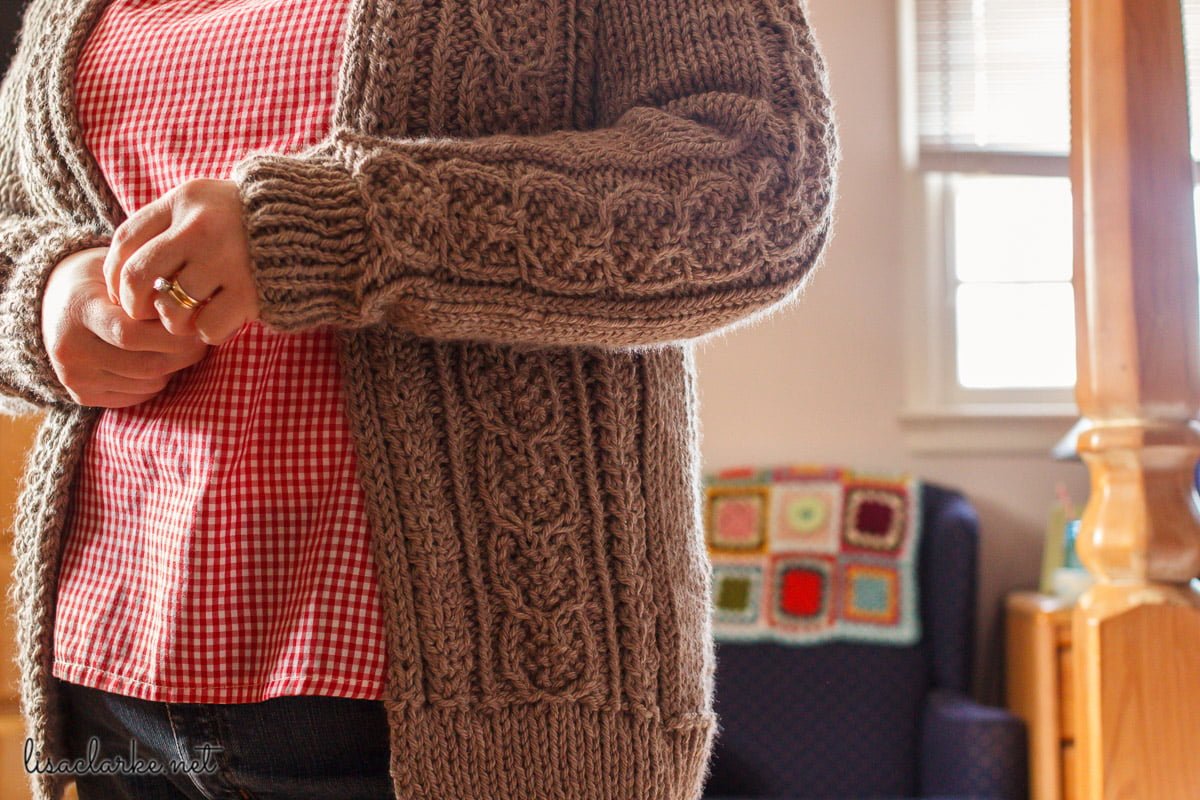 I look like such a fast worker when all of my WIPs are finished in the same week! Don’t believe it. I’ve had this sweater on the needles since January. And now that it’s off the needles, it lives almost constantly on me. 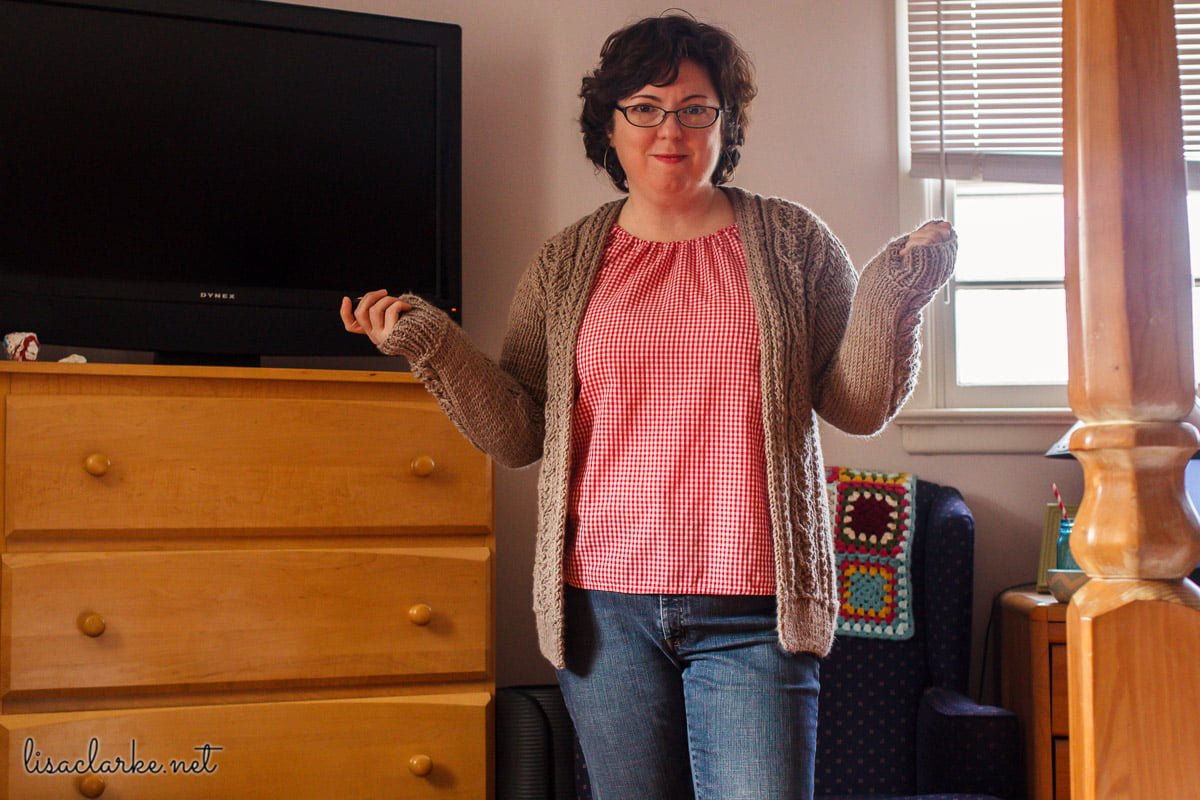 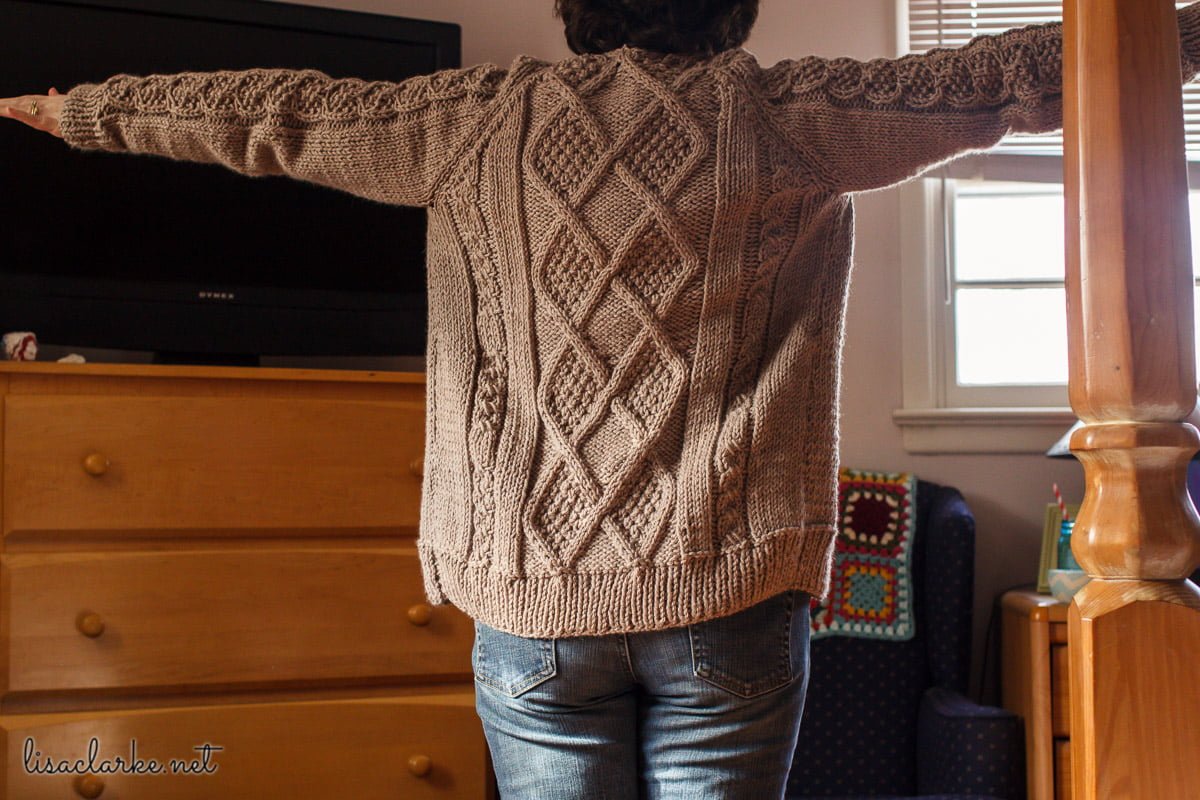 This is Aidez, and it’s knit in a bulky weight yarn. I think this may be a first for me, but I used the exact yarn called for in the pattern (Berroco Vintage Chunky [it was an alternate choice, actually]), right down to the color (#6105 Oats). I am often all about bright colors, but I’ve felt the need for a neutral in my closet – something I could wear throughout the cold months that would coordinate with absolutely everything else I own. The sample color fit that bill very nicely. 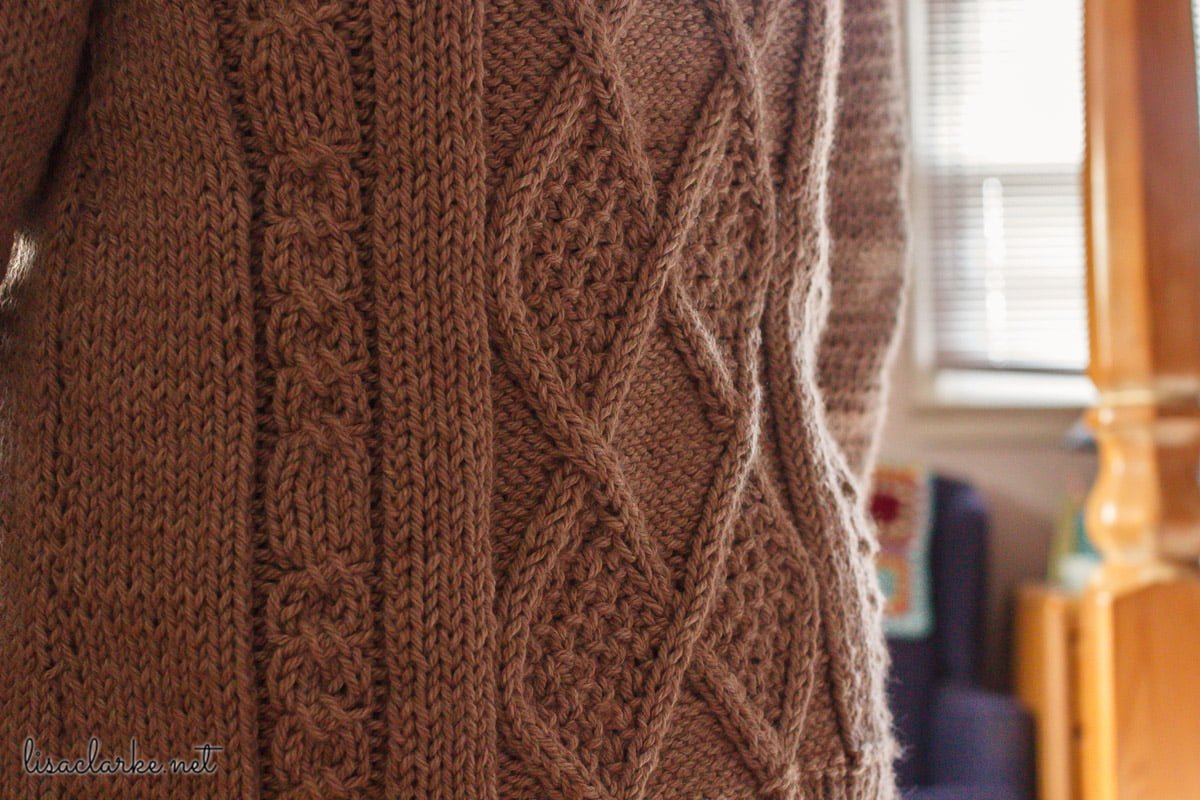 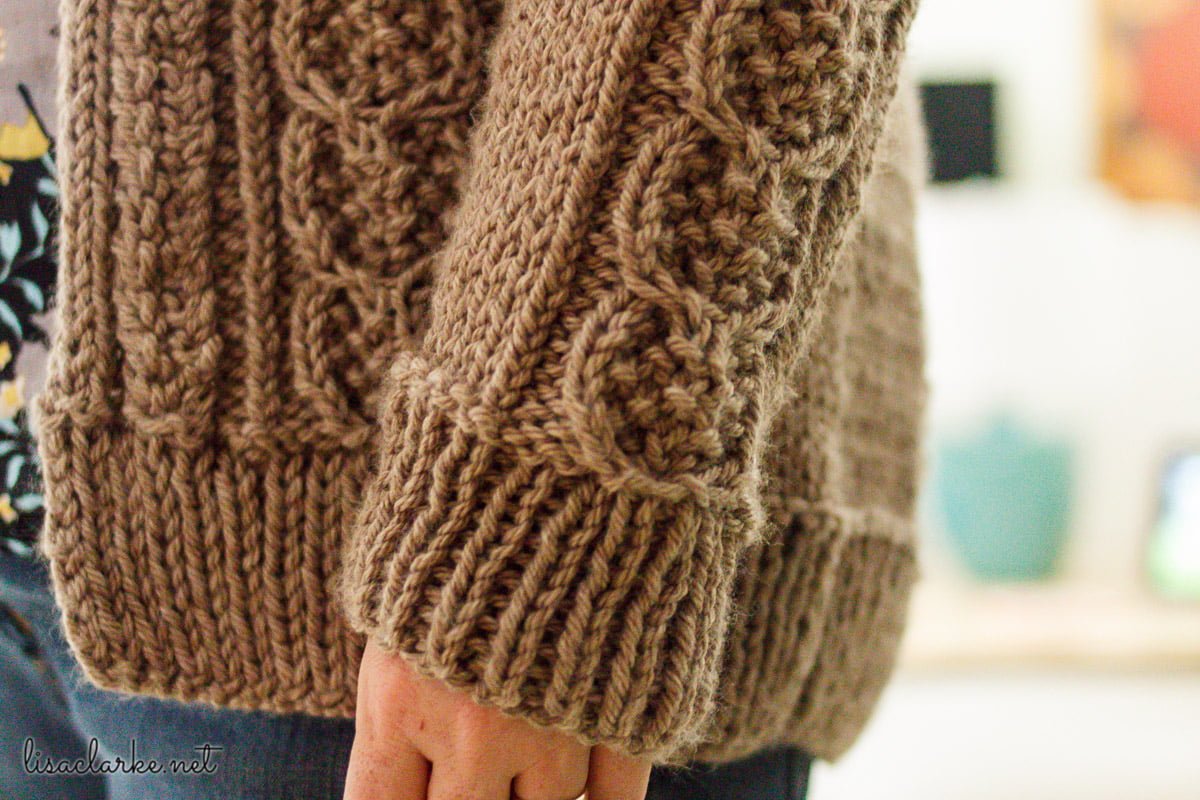 I love the look of cabled sweaters. This one, due to the bulky yarn and the #10 needles, moved along much more quickly than I expected. When I started out to knit this, I was prepared to have it be one of those projects that I am dragging around with me for months. And while it did take me months, most of that was because I had to take a break to work on another project.

Cables are enough of a challenge to keep my brain engaged in the process, but not so hard that I ball up the whole project and rage quit it. And the end result is so impressive! I just love the way it looks, and I have to say, I often just can’t believe that I knit this sweater myself. I have a distinct memory from about 7 years ago, where a friend asked me if I had knit a cabled sweater I was wearing. I hadn’t (I bought it at a thrift shop). And I was so taken aback by the mere suggestion that I could knit something so complex. At the time, I couldn’t knit at all! 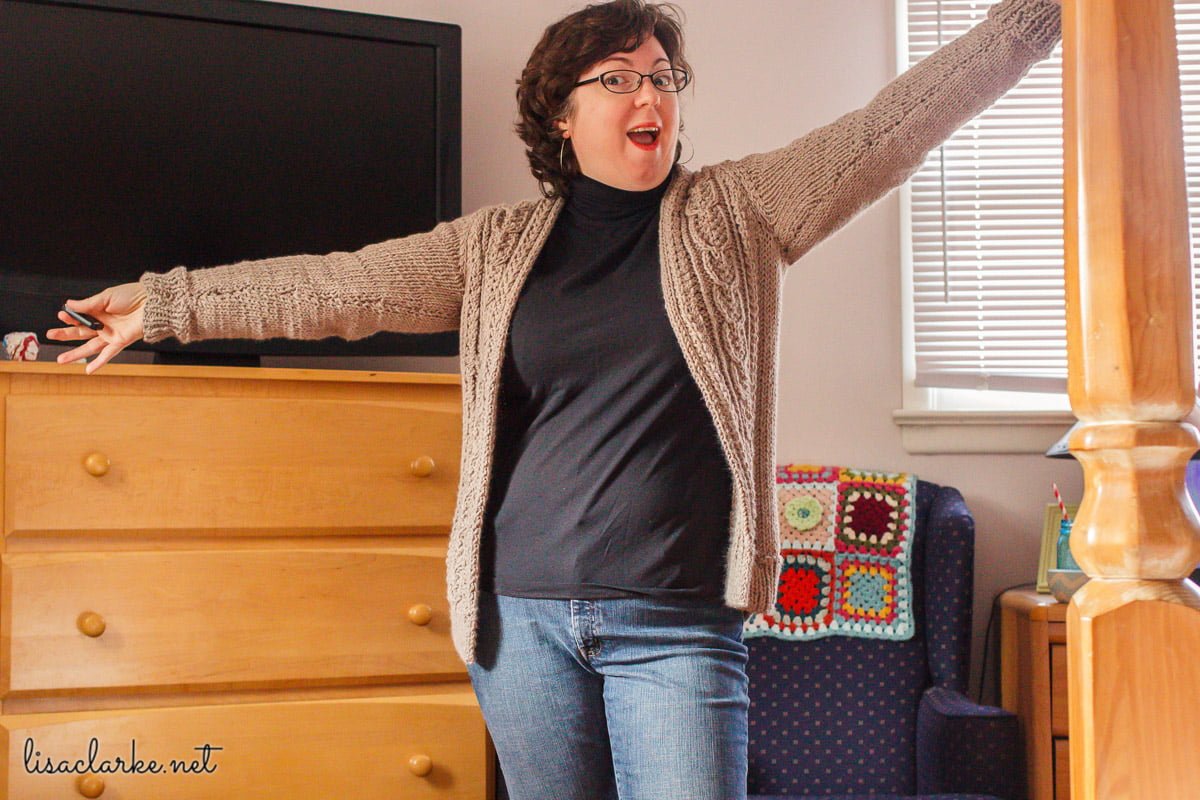 In that context, this is super cool 🙂

If I could change anything about the way I worked this pattern, I would have knit it in one piece instead of with seams. There are handy instructions for converting the pattern and everything! But I had already started my seamed version when I saw the instructions and I didn’t want to start over. If I ever knit another one of these, though, it will be in one piece. I really hate sewing seams, and I’m not all that good at it either. Don’t look too closely at that part of my sweater… 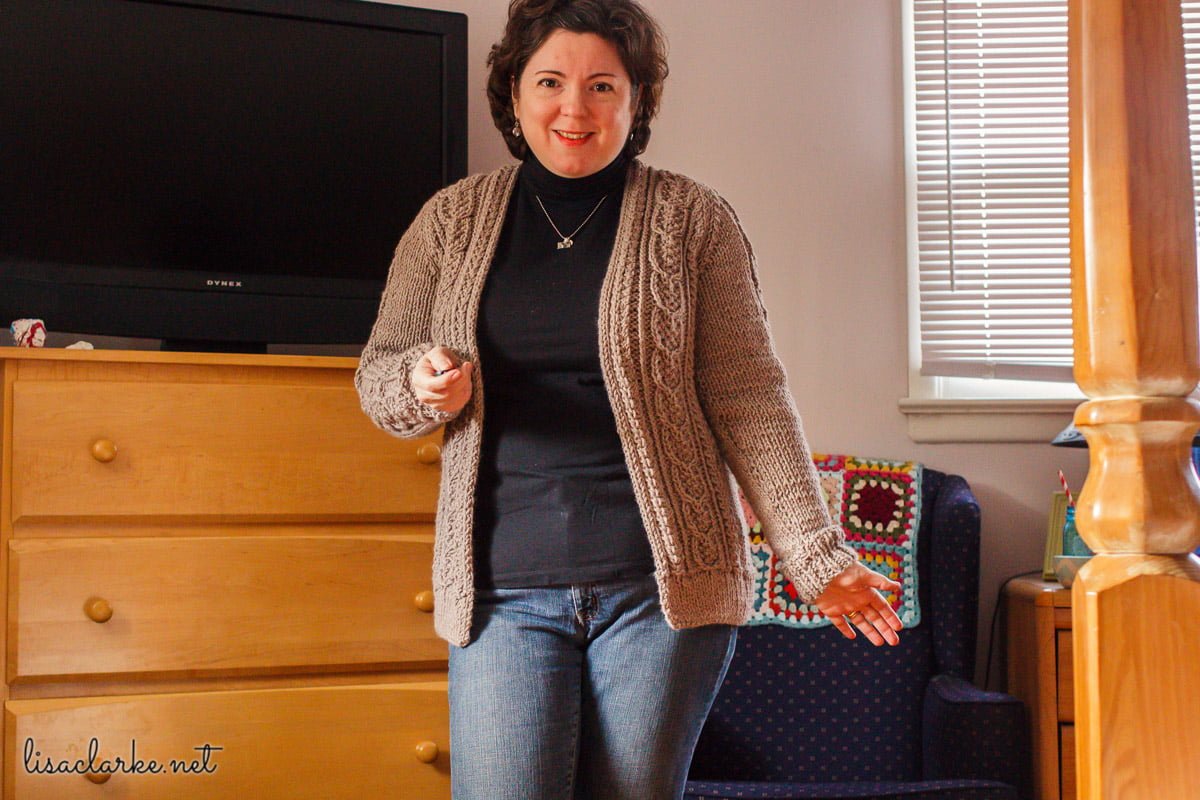 My goal now is to get as much wear out of it as I can before the weather gets warmer. I’m off to a good start 🙂