I finished weeks 9 and 11 (there was no 10) for the Granny Square Sampler. I really, really love these week 9 dimensional flowers. I will admit that I only half-read the instructions while catching up on an old White Collar episode, and so I did them kind of wrong. I realized my mistake after the first one, but I was so in love with the way it came out, I decided to do the other two “wrong” as well.

For the curious, I didn’t simply insert the hook in the back of the “stems” to do the second row of petals. I actually turned the entire square around and worked the second row of petals from the back. As a result, the wrong side of those petals shows on the right side of the square, and they curve slightly towards the back instead of the front. But, like I said, I really preferred that look once it was done. 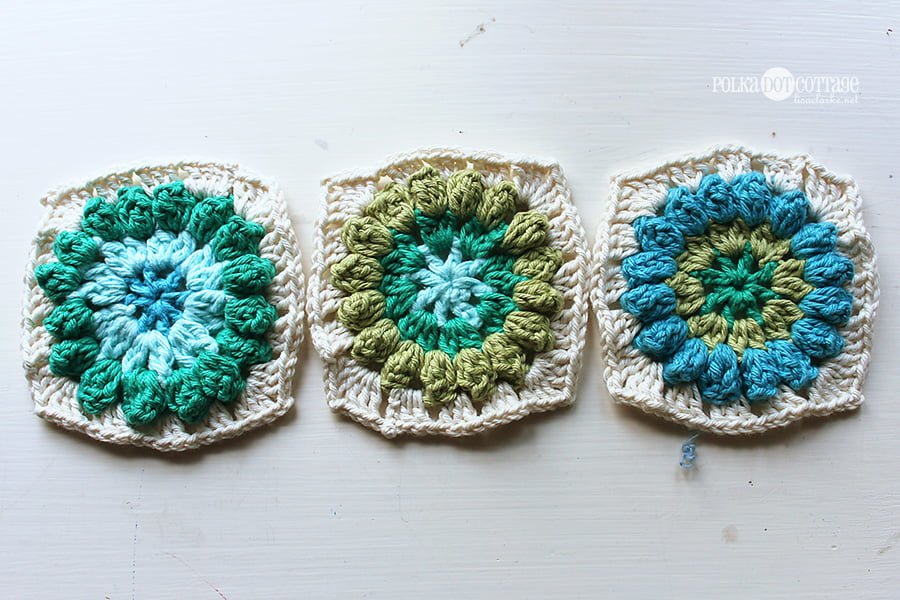 For week 11, I decided to focus on getting more green into the blanket. These squares introduced the popcorn stitch, which is kind of nifty. I think the stiffness of the cotton really helps to define the dimensionality of some of these recent squares. I imagine the effect would be softer in wool.

So here are the squares so far. I am figuring that Blair is going to give us some direction in terms of putting these all together, and I am looking forward to that. I’ve been having trouble picturing the end result as anything but chaotic. Today, though, it occurred to me that I could combine some of these smaller squares into multi-square modules that would all end up being the same size. Then, those modules could be connected together easily to form the interior of the blanket. A few more rounds for a border, and voila!

I feel good knowing I have a possible plan of attack with these now. Three more weeks to do, plus whatever is unveiled this Friday, and I will be all caught up.  Whew.