You have been so kind with your comments lately. I haven’t had a whole lot of time to myself, as you can probably imagine, so I am letting some things fall by the wayside, including responding to comments. Please know that I am reading every one, and feeling so grateful for the moral support!

So, Neil is in our local hospital, waiting and hoping for the kidney stone to pass on its own. Any kind of surgery would be risky this soon after a heart attack, and so the preference is to avoid that for as long as is humanly possible. It’s a large stone, though, with about 50% chance of finding its own way out, and Neil is in a not-insignificant amount of pain when he’s not being medicated. It’s a crummy situation for him to be in, and I wish he didn’t have to deal with this, but it is what it is, I suppose, and we have to make the best of it. 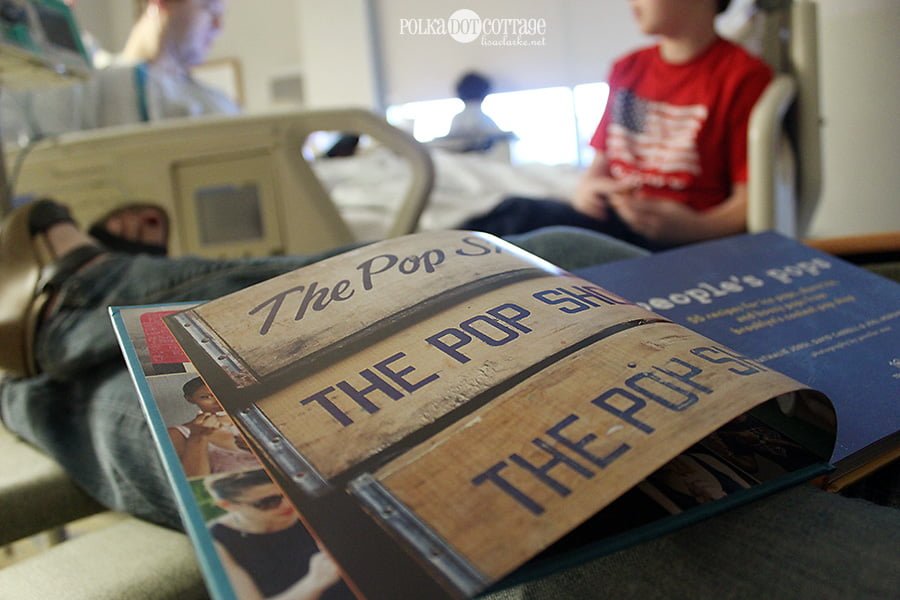 I managed to get a 2-hour nap yesterday morning, after the ER nurse told me to go home, and it was enough to power me through the rest of the day. I brought the kids over to see Neil after supper, and we spent an hour or so hanging around. I nearly fell asleep in the comfiest hospital chair ever while flipping through my super fun new library book (note to self: buy cucumbers and watermelon. and find the ice pop mold).

When I have a potentially-sleepy drive ahead of me, I usually like to bring a drink in the car. For some reason, having something to do with my hands (lift drink to mouth, lower drink to cup holder, repeat as necessary) helps keep me from feeling drowsy. We said goodbye to Neil and I told the kids that we could stop at Au Bon Pain in the hospital lobby and get some drinks for the ride.

Except when we got to the lobby, Au Bon Pain was closed. Drat. 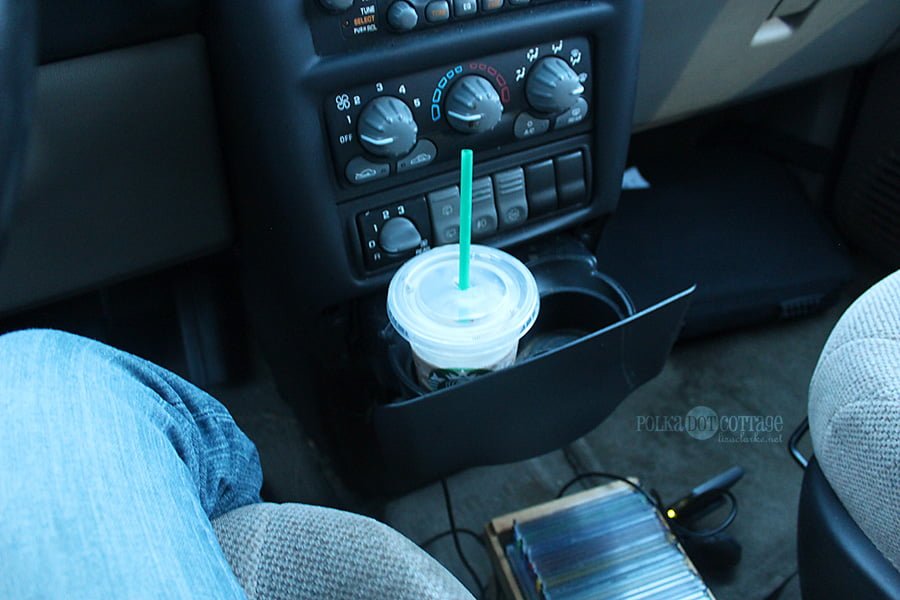 By now I had utterly convinced myself that if I did not have a drink, my fatigue would send us hurtling into a ditch on our way home through the Great Swamp, so I said, “hey, I think there’s a Starbucks here in Morristown, let’s go look for it.”

“Yay! Frappuccinos!” replied my offspring, and off we went.

Morristown is a small city, and it’s hopping on a Friday night, so working our way through the green and to the Starbucks took longer than it really should have. And once we found it, we still had to park. We drove around long enough that I started to think we probably could have already made it home by now and been perfectly fine. Had I been alone in the car, I’d have just skipped the drink and gone home. But I had the aforementioned offspring to think about, and they had already begun drooling at the thought of a Double Chocolaty Chip frozen concoction (with just a little bit of whipped cream on top for Eamonn, “I don’t want to eat so much fat,” he said,  “I want to learn from Dad’s mistakes.”)

So there we were, in Morristown’s snazzy new parking garage, climbing to the 2nd level, then the 3rd, then the 4th. Still no empty spots. And then we got curious. “I wonder how far up this garage goes,” I conjectured aloud, and before we knew it, we were driving past perfectly useable spots on floors 5, 6, and 7, just to see where this thing led. 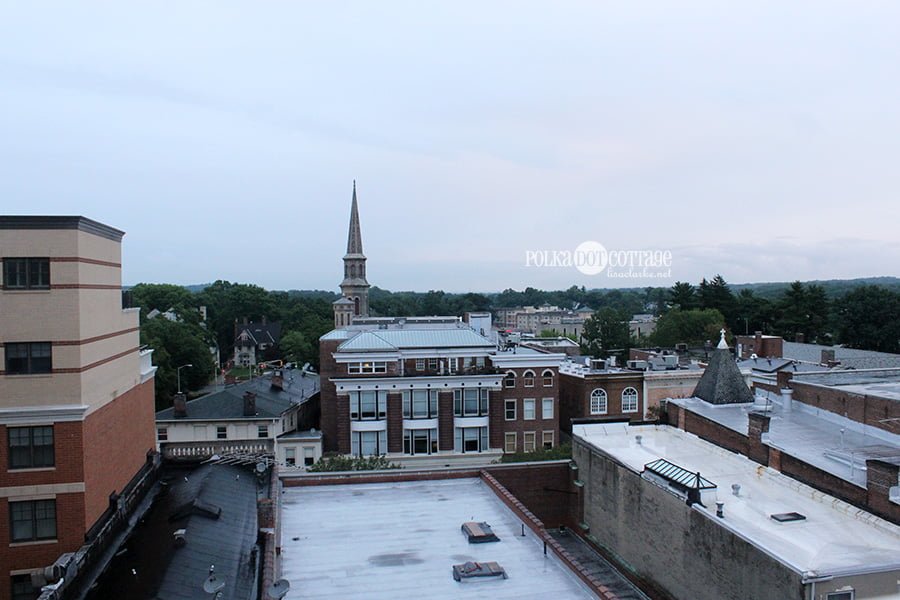 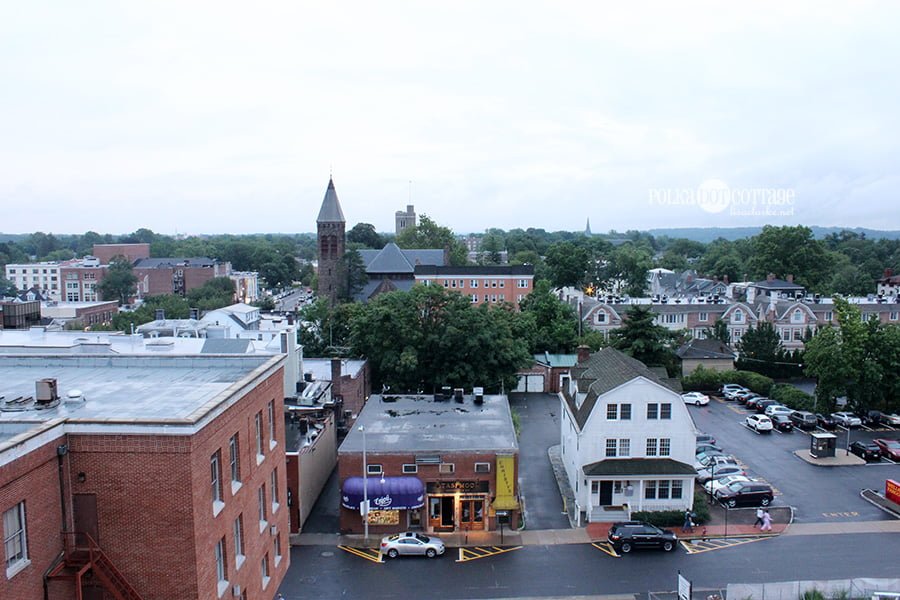 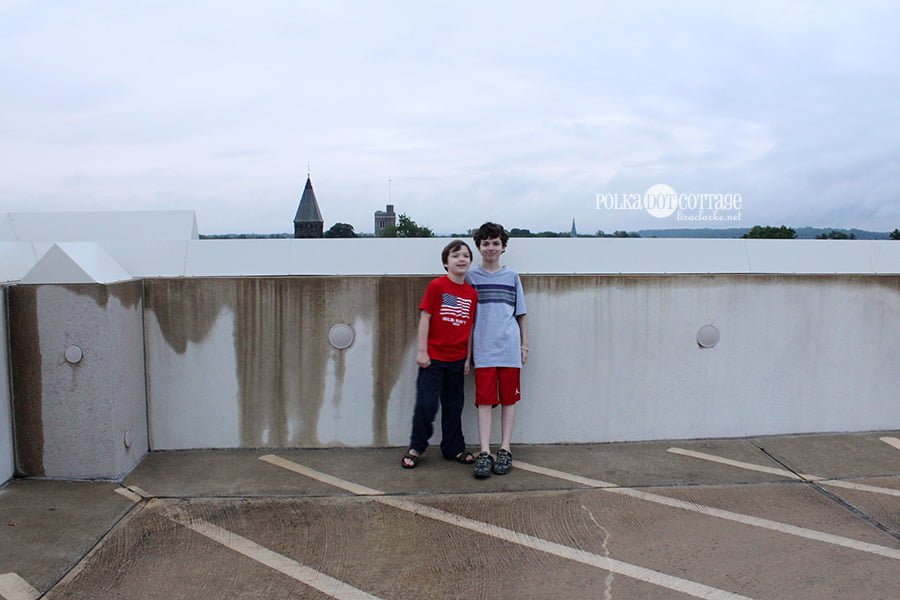 Well, the answer is that there are eight floors in Morristown’s newest parking facility, and that you can get a really nice view of the area from there.  We had the roof to ourselves, so we took some pictures, ran around in the misting ran, and looked out over the town below us. Eamonn asked me to film a new episode of “Super Flufy: The Man Who Does Dangerous Heights” for him, so I did.

We went down to ground level, got our drinks, and spent some time soaking in the night life. We are not Morristown on Friday Night kind of people.  We are more like Handmade Quilt on the Couch with a Cup of Tea and Masterpiece Mystery kind of people (or, at least I am – the littles might prefer something slighly less cerebral) so this unplanned glimpse of how the other half lives was kind of fun for us.

With our drinks in hand, we braved the elevator to the roof of the parking garage, drove home safely, piled on the couch under our various handmade blankies, and indulged in our most recent guilty pleasure: Frasier on Netflix. After 3 episodes, (the last of which I slept mostly through) it was well past bedtime. We sent Neil a “goodnight, wish you were here” kind of instant message, climbed the stairs to my room, and all fell asleep in one big pile in my bed.

Tiring day. Glad we were able to end it with a little parking-garage bonding time. I suspect the rest of this summer is going to be all about simple pleasures such as this. Complicated day trips are out of the question at the moment, and honestly, they’re often not as memorable as the little side-trips that pop up out of nowhere. Here’s to more unexpected adventuring in simple, everyday places!

6 thoughts on “Adventures in municipal parking”