I’ve mentioned here before that my so-called “studio” is actually my dining room table. And I’ve also shown you how it can go from clean and lovely to total disaster area in a relatively short time span.  Despite all appearances to the contrary, I do actually prefer for my dining room to be neat and company-ready.  Really.

The thing is, that table has to function as my claying space, and my sewing space as well.  And when I have both things going on at once, there’s not enough room for all of the supplies to play nicely. So I spread out onto the cabinet by the window, and it’s just a losing battle from there.

So I’ve made a rule for myself that I can only have one medium actively taking over the dining room at any given time.  For the last few months, it’s been polymer clay, and I’ve been having a lot of fun with that.  But that sewing itch is starting to return.  I’ve been trying to put it off.  I don’t feel like I’m ready to put the clay away just yet. But man, do I want to stitch up a few things right now!

I’ve given it some thought, and I believe that the reason I hesitate to put away the clay is the fact that it’s such a royal pain in the neck.  This is what the clay table looks like at the moment: 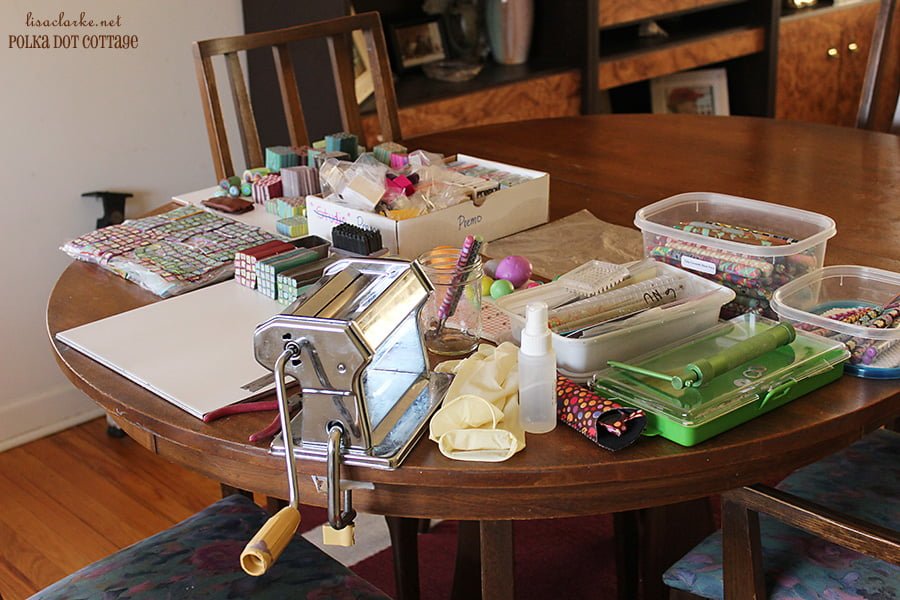 It’s nicely-organized, isn’t it? I love that. I also have a small pile of necessary things on the floor, and that’s not too bad either: 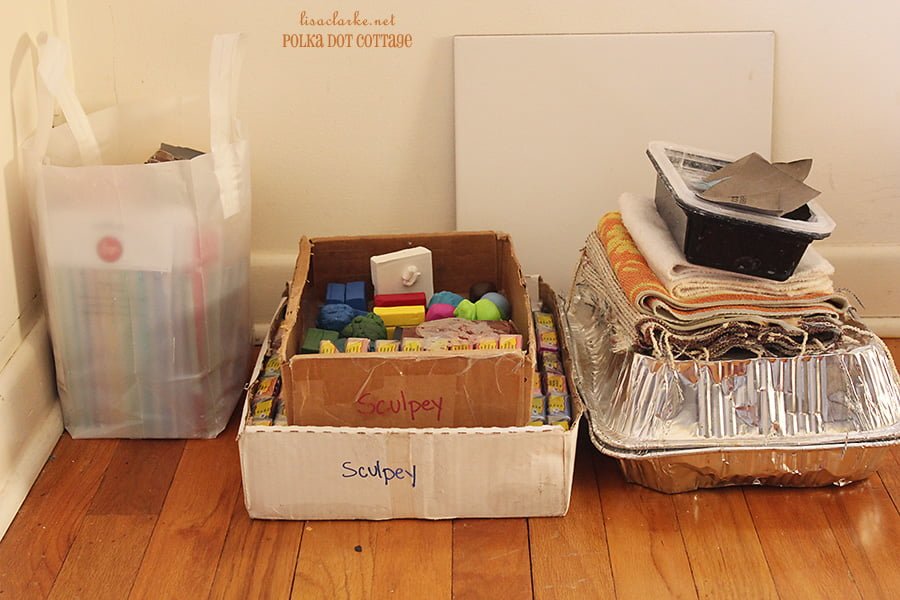 In theory, both the table and the items on the floor could be packed up in a nice organized stack, and shelved somewhere until I needed them again, at which point they’d be easy to access and easy to set back up.

Hey, good thing I have these built-in cabinets right behind the table! And good thing I dedicated one of them to clay many years ago.  I should be able to slip my pile of clay tools and supplies on the shelf in there until I need them again… 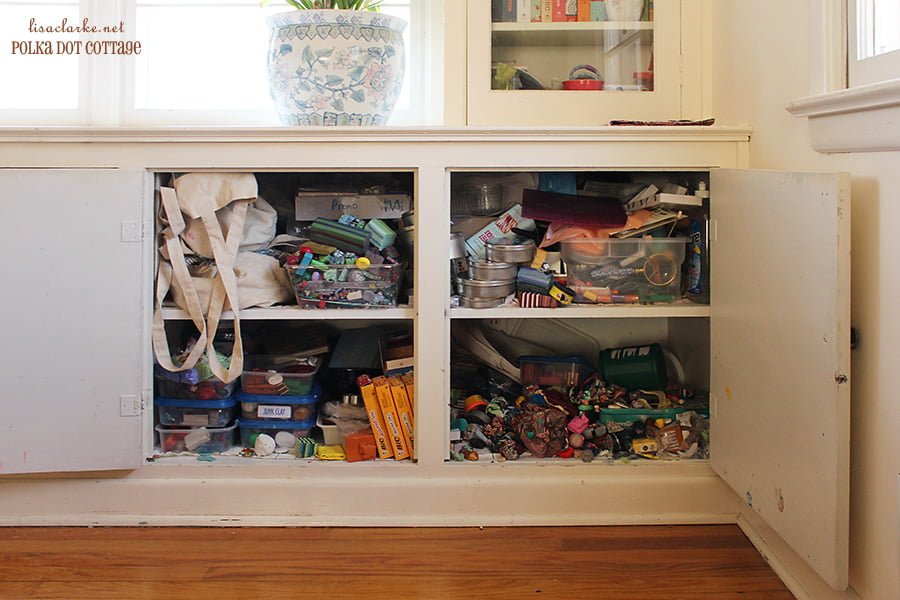 Or not. Oh my. I’m not even sure how I have managed to keep those doors closed!

Argh! it’s this craft supply clutter that makes it so complicated to switch from one medium to another!  As you can see, nothing else could possibly fit into that cabinet (although, I assure you, I still try), and so in order to put away the things I currently have out, I’ll have to shove them into crates and find some other room(s) of the house that can store them.  It’s far from ideal.

This is going to sound completely unrelated, but allow me to ramble for a moment about my day… Neil was out all day, the boys were deep into a game they made up, and I was planning a nerdtacular several hours with my laptop.  I tell you, I was giddy at the thought.  First on the list was to convert a number of my tutorials to EPUB format.  Neil had shown me how to do it last week, so I jumped right in, and got stuck five minutes later. Without my EPUB guru here to help me, I tried google (and a little brute force) but it just didn’t work for me, and I had to resign myself to scrapping that idea.

Next on the list? A little blog tweak, involving the social media sharing buttons. I’ll spare you the details of how that went so spectacularly wrong that I ended up undoing every last change and putting it back to the way it was.

By then it was 3pm, and I had decided that technology and I were not destined to play nicely today. And that’s when I remembered that disaster area of a cabinet. And how desperately I was aching to start sewing some new shirts. And how I hated having my clay supplies scattered all over the house. And what a pain. in. the. neck. it was to put the clay stuff away and get it back out…

So I did this: 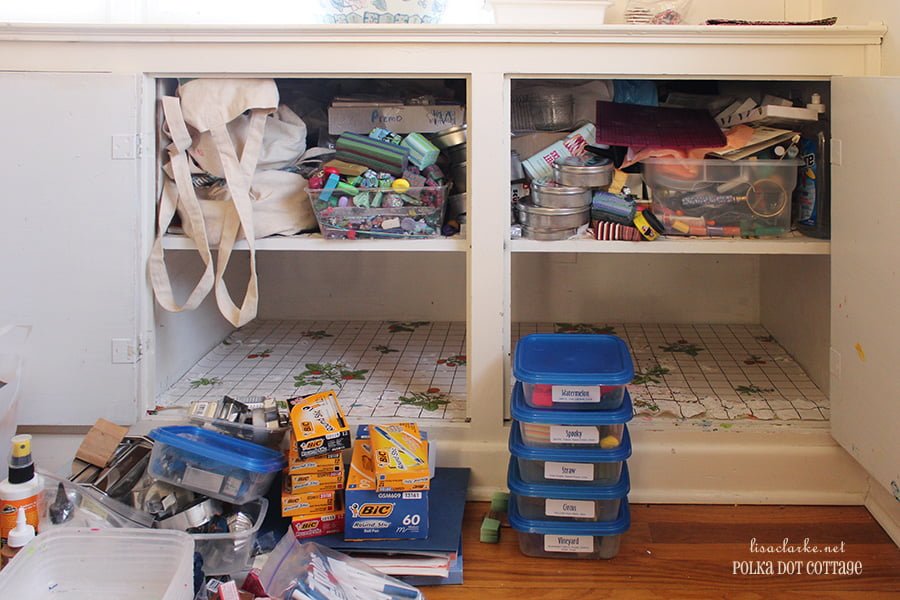 And after a brief “what have I done?” moment where I realized I would have to clean this mess up, I pulled myself together and did this:

Over the years the clay had reacted with the shelf paper, so I tore that out: 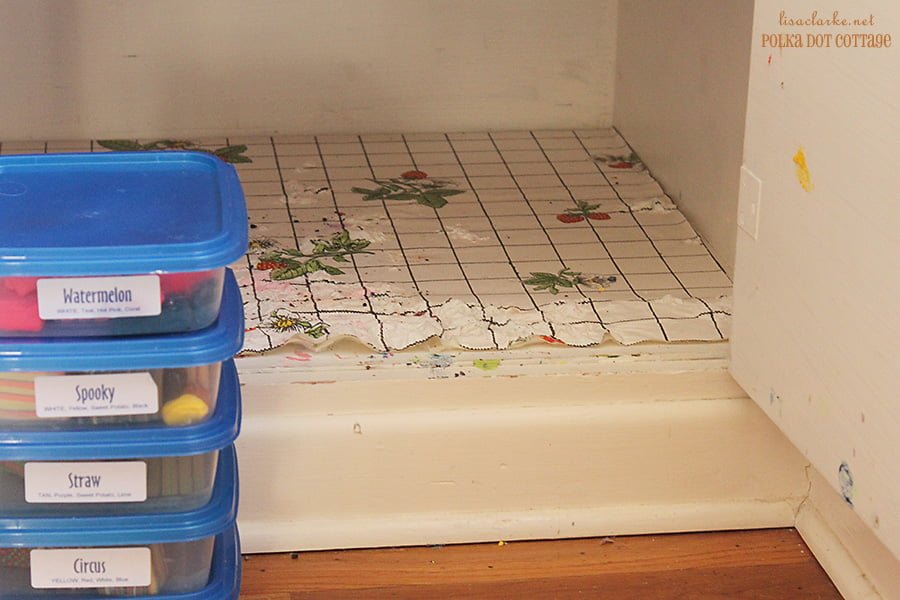 I generated nearly a full outdoor garbage can full of stuff, plus a box of not-garbage that I plan to give to the art department at my kids’ school. Again, I find myself wondering how those doors ever closed. 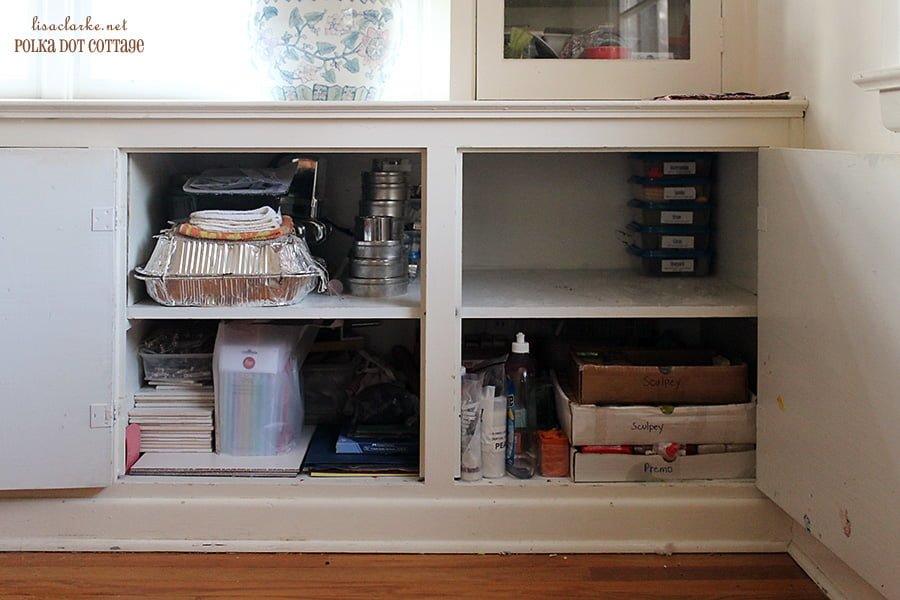 And there is a nice empty space where I can stack my current projects and easily retrieve them when it’s time to get back to claying.  What a relief!

There is actually quite a big empty space there – the cabinet is quite deep – and I’m hoping I can fit all of my little boxes of canes in there, too. Right now they are in a big tub in the upstairs hallway – a place that makes no sense whatsoever, but fits in with what I said before about just putting clay stuff wherever I can find a spot for it. 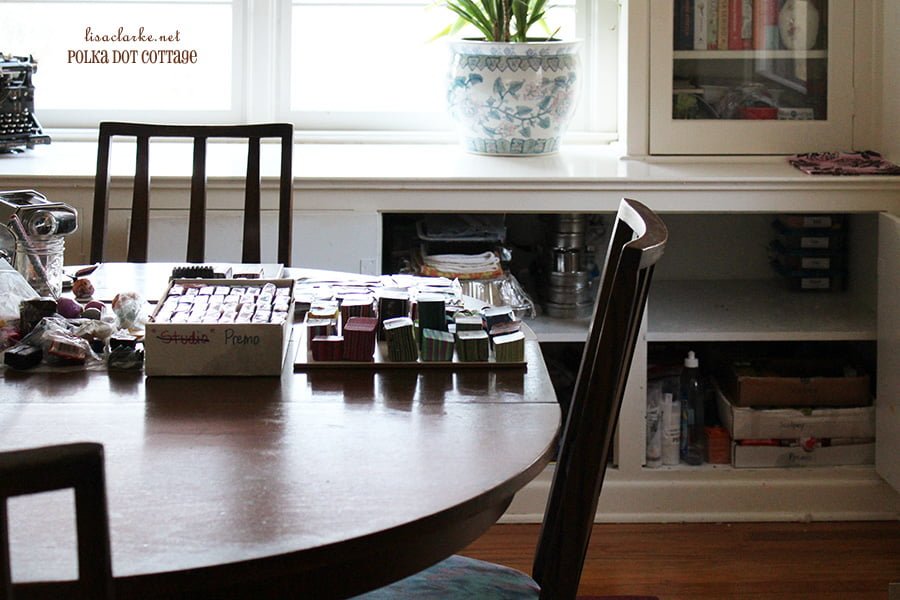 This really is going to be so much easier to live with.

Later, when I show Neil what I did while he was out, I am pretty sure he’s going to remind me about the shelving units in the basement that could use the same kind of attention.  If I learned anything at all today, I won’t do my usual thing of pretending not to hear him. (We’ll see about that…)

9 thoughts on “The cabinet of doom”