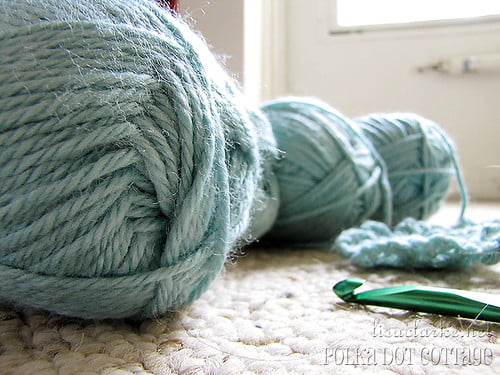 Remember the last time I showed up here with a photo of yarn + fabric and told you that in a matter of weeks the raw materials would be transformed into a dress and a wrap to wear to my nephew’s Christening?

I never did come back and report that I’d worn a totally different (store-bought) dress and paired it with a (store-bought) sweater.  I never told you that I instead used the fabric for a wrap skirt, and that the shawl is only about 25% done and sitting with the rest of the yarn in a bag in my basement.  Yeah, I kinda forgot to mention those little details. 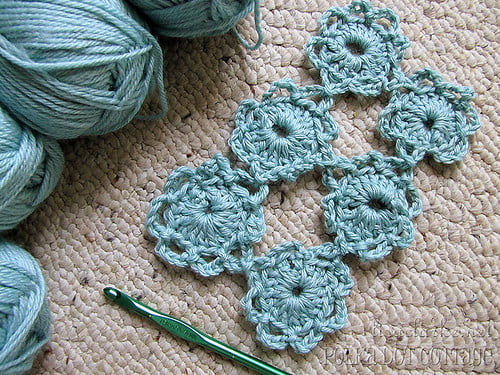 Had I actually filled you in at that time, you’d probably be looking at me skeptically right now as I show you this yarn, and this little patch of crochet work.  You’d likely raise your eyebrows as I explain my plan for turning these materials into a wrap for a little get-together this weekend.

That’s right – it needs to be entirely worked and blocked in a matter of four days.  And I would prefer not to ignore the rest of my life in order to do it, so that really just means four evenings, hook in hand, Masterpiece Mystery chattering away in the background. That’s the plan, anyway.

That little bit that I did last night is my own design, and while I think it has potential, I’m rather afraid of the big gaps between the flowers.  Visually it works, but for a shawl? Not sure it will hold up.  I like it enough to revisit the idea later, but for now I have decided to switch to something tried and true, and save the experimenting for sometime when I am not in a rush. 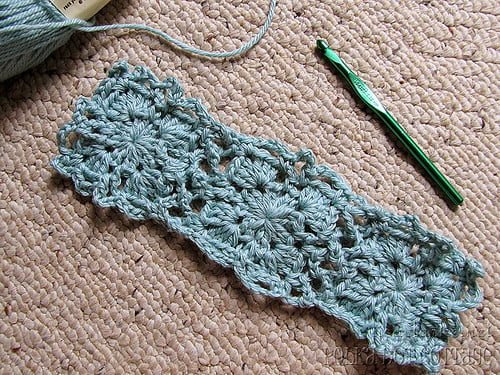 So I’ve decided to switch to Linda’s Summer Picnic Wrap pattern.  I worked these three squares this morning in an effort to convince myself it won’t take any longer than my original plan.  I think it won’t.  It might even be faster.  Who really knows?  At best, I will have a finished wrap to wear this weekend.  At worst, I will have another UFO in a bag.  It’s worth the risk, I think.  I have a backup (store-bought) sweater waiting in the wings, so whatever happens I’m good.

Don’t think I can make those 😉

9 thoughts on “Another ambitious project”