Oh, there is so much to catch up on!  I was away for a four-day weekend at the shore, which was very nice as it always is, and now I am sitting here looking at laundry, an empty refrigerator, and a handful of projects that needed to be done “yesterday.”  I suppose that is the price we pay for a little vacation, though.  It’s worth it, I think.

Before I dive into all of that work, though, I wanted to poke my head in here and show you a few things.

Like, the new shirt I sewed before we left.

This came together from a really lightweight, breezy cotton, New Look pattern #6871, and a healthy dose of swearing.  My seam-ripper got a workout on this project, let me tell you.

The only modifications I made to this were to leave off the bottom strip, and to narrow the width by about 1/2-inch on each side, after I’d sewn it. 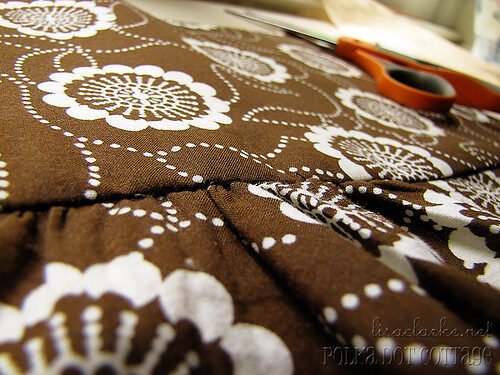 One thing I’ve learned is that I am not cut out for making blouses with fussy yoke construction.  I’ve made them before, and always with less-than-stellar results.  The good news is, you really can’t see my mistakes on this one, and I think I can do the next one differently (aka more simply).  It won’t be as nicely finished on the inside, but who is going to see that but me?  I can live with it, if it means I can retire the seam-ripper.

So anyway, I made this shirt to wear on the beach on my birthday.  I turned 40 on Sunday (not sure how that happened – I am way too young to be forty) and instead of the big fun party I’d imagined throwing myself, I spent the day on a cold, wet, windy beach nursing a terrible toothache.  Good times.

Actually, I make it sound much worse than it was.  True, the weather and the tooth pain were at their worst on Sunday, but when you take the weekend as a whole, it was really nice: the two days of crummy weather were bookended by two positively gorgeous days, plus I had a bottle of Tylenol and a tube of Orajel that came in very handy.

Yeah, it was worth it to me to give up my party in favor of continuing our annual Ocean City tradition. (I think. Probably. No, definitely.  Maybe.)  Ok, maybe I’m a wee bit conflicted about the lack of fanfare, but Neil helped make up for it in a big way with the little toy he splurged on for me…

It’s a tablet computer, in case you don’t recognize it – like a honkin’ big smartphone, but without the phone.  This one runs Google’s Android operating system, which is exactly what I would have chosen if I’d picked it out myself.

P.S. I am here to tell you that Angry Birds is just as addicting as they say it is.  I’m usually not a big game-player, but the four of us couldn’t seem to put it down until we’d finished the entire “Poached Eggs” episode.  That’s 63 levels of bird-catapulting, pig-squashing fun for the whole family.

I’ve got about 400 more photos to sort through (already whittled the first 400 down to 30 favorites and edited them) and then I’ll post some pictures of our trip.  In the meantime, I’ve got a lot of business to take care of, both around the house, and actual business business.  And I have to somehow resist the temptation to pick up that tablet and waste an hour (or four).  Wish me luck!