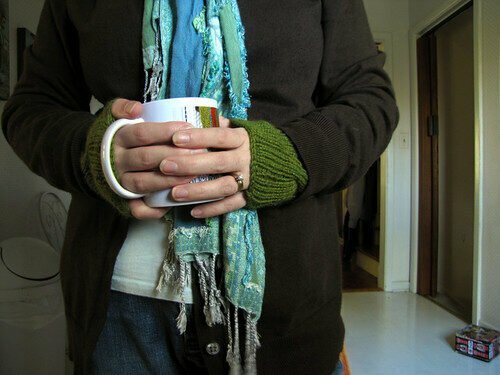 I just realized it’s been a year since I first picked up the knitting needles.  My first project with them was a pair of fingerless gloves, and surprise, surprise, guess what my most recent project has been?

Yes, it’s another pair of Dashing.  After making three pairs for other people, I was eager to make a pair for myself, but  I modified the pattern because I couldn’t face the thumb holes.  I’m so bad at them.  I had been really happy with the progress of these gloves, and the prospect of the thumbs being ugly was starting to stress me out.  I ultimately decided that avoidance was the best medicine, and I should leave the thumbs out altogether.

Besides my distaste for wonkiness, the other factor in my decision was a much more practical one: I have two other pairs of fingerless gloves that I wore regularly last winter.  One was a pair of thumbless Toast that I made two years ago on the loom.  The other was a pair of thumbed Toasty that I made last year, my first needle-based project.  As it happens, the reason I tried needles in the first place was that I wanted a pair of gloves with thumbs and I couldn’t manage it on a loom. 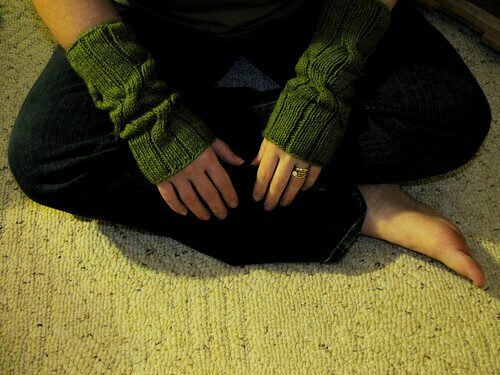 But you know what? It turns out that while I like both pairs, I find (thumbless) Toast more wearable because it’s easy to adjust their position on my hand.  The (thumbed) Toasty pretty much can’t go anywhere.  I didn’t realize how much I tended to adjust my gloves until I was faced with a pair that didn’t move.

So that settled it.  Thumbless Dashing for me.

Modifications:  Follow the pattern up to and including the third cable round.  Knit 9 rows in pattern, do an additional cable round (work as for the second cable), knit 18 rounds in pattern, bind off.  This makes the gloves identical from top to bottom, so it doesn’t matter which direction they’re worn.