I don’t know for sure if it happens to me every year, but I do very clearly remember the first time it happened.  It was Spring 2007.  I had just discovered the indie craft movement, and was starting to feel the urge to expand my creative horizons.  I was exploring new blogs, flipping through new books & magazines, and feeling a strong urge to just make something, already!

And yet, for all of my desire, I remained paralyzed.  Do I work on the new polymer clay cane design I had? Do I try tub dying? Do I jump into an image transfer project? Do I learn to knit, try crochet, buy myself a sewing machine? Ack!  It was all too much.  There were so many possibilities, I just didn’t know where to start.

Within a few months I managed to procure a sewing machine, and that was the trigger that unleashed a torrent of crafty projects that carried me easily through the next eight months.  It was a fabulous ride.

So here I am now, almost exactly three years later, and history is repeating itself.  I will liberate my sewing supplies from the basement and dive into one of the projects that has been taunting me for the last many weeks.  I will!  But not today. 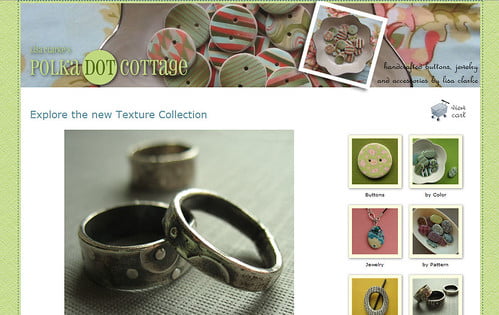 No, today I got my geek on instead (which is often what I do when I am having trouble taking action).  Remember when I redesigned the blog and the shop a few months ago?  I thought that I could live with the two spaces looking significantly different from each other…  Turns out I can’t.  So, since I really like the blog’s design, I reworked the shop to look like that.  I’m mostly finished now, and I really like it!  It took a while, but I think I’ve struck a pleasing balance between content and white space.

And now in comparison, the blog looks too cluttered to me – go figure!  I suspect that will nag at me now, too, until I do something about it.  It never ends, eh?

[In the time it took me to write this, my seven-year-old grabbed a stack of scrap paper, a pair of scissors and a glue stick, and launched into an ambitious craft project of his own accord.  Clearly he does not share my Seasonal Inspirational Overload Disorder.  I’m going to go hang out with him for a while and hope he rubs off on me!]