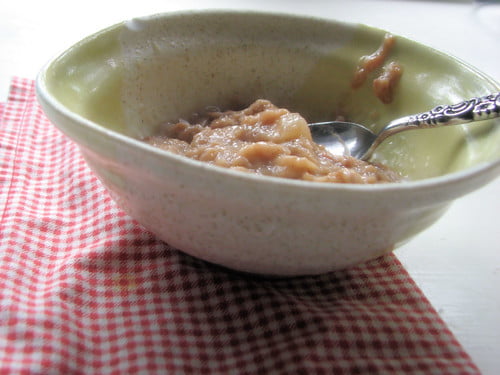 I have this thing about oatmeal.  I’ve never cared for it, and yet every few years I find myself in the grocery store, picking up a box of the stuff.  The first time I tried it, many years ago, it was plain instant oatmeal, and it was like eating a bowl of mushy cardboard.

A few years later I thought to myself, “maybe it would be better if I tried the flavored kind.” As it turns out, eating instant peaches & cream oatmeal is like eating a bowl of mushy cardboard that you’ve stirred with a peach-flavored lollipop.

Time went by, oatmeal again crossed my mind, and I thought perhaps I had just picked up the wrong flavor before.  Another box of instant oatmeal found its way into my shopping cart – this time, a multi-pack.  I tried the cinnamon.  Guess how that turned out.

You can probably see where I’m going with this.  Yes, the old familiar feeling has returned.  Could it be a Fall thing?  Maybe the chillier mornings have me dreaming about warm and cozy breakfasts?  I really don’t know.  I’m not a big breakfaster under normal circumstances.  A cup of coffee and a Luna Bar will do it for me – or a homemade muffin, if I’m lucky enough to have stocked the freezer with some of those.

Thing is, my eating habits are not what they were last time the oatmeal thing happened to me.  I am not as much about the “instant” as I was.  I’m looking at labels more, trying to avoid the pre-packaged, and I spend more time in the kitchen doing the from-scratch thing and being creative.

If I was going to succumb to this silliness again, it could not be with a box of instant oatmeal this time.  Nope.  I would want to try it with real ingredients.  So I spent last night cutting up a local apple, scooping oats, and measuring muscavado sugar.  I filled up my slow-cooker, put it on Low, and went to bed imagining how fabulous it was going to be to wake with the smell of cinnamon hovering over my pillow.

It would be a quintessential Fall morning, with glorious scents emerging from the kitchen, and eager children holding out their bowls, requesting a taste of the deliciously warm and healthy nourishment I had prepared for us. *contented sigh*

The reality was a somewhat different story.  The cinnamon never did waft up the stairs, but I did get a whiff entering the kitchen.  I thought it smelled lovely, but the boys both wrinkled their noses and informed me they wanted no part of whatever was in the crock pot.

That’s alright.  There would be more for me, then.  This lovely concoction, which was going to blow the instant stuff right out of the water, was all for me.  I took my first spoonful.

Well, wouldn’t you know it? It was just like eating cinnamon-flavored mushy cardboard with a dollop of applesauce.

Darn.  Have I learned anything from this little exercise?  If history is any indication, not likely – ask me in three years.  How much simpler things would be, if I could just accept that I don’t care for oatmeal!  I have no problem saying I dislike peas, or cooked carrots.  Why is this so different?

Ah well.  The silver lining in all of this is that just as I am no longer an “instant oatmeal” kind of girl, I am also no longer a “throw it away” kind of girl.  At least not until I have investigated other possible uses for it first… 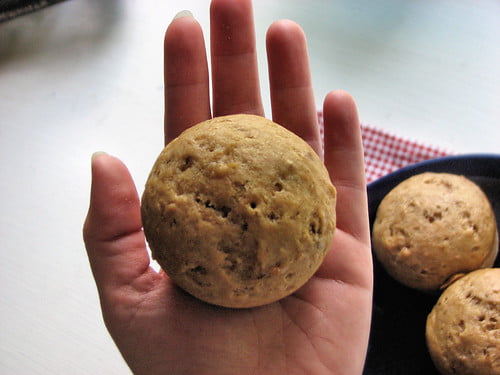 Ohhhh, yes, that’s much better: a dozen slightly-over-gingered but not at all like cardboard, Cinnamon Apple Oatmeal Ginger Muffins, which I may just share with those pesky nose-wrinkling kids if they ask me nicely 🙂

29 thoughts on “A thing about oatmeal”