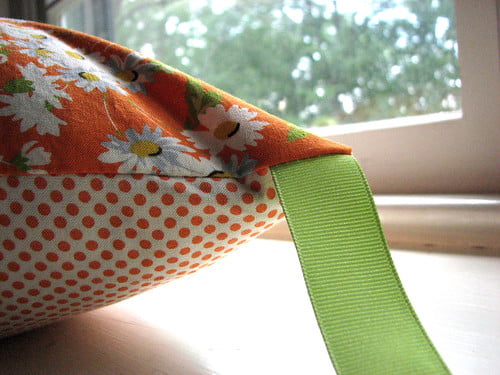 There’s a road trip in my not-so-distant future, and it involves my 10-year-old car, which I do love, but which also causes a fair amount of discomfort on any drive that lasts longer than an hour.  It’s the kind of thing you wouldn’t notice tooling around town, but sit in the same spot for too long and, oh, soreness on your poor, delicate behind!

I tried sweet-talking the husband into giving up his claim on the van that day, but it was a no-go.  He’s got things to haul, and I don’t.  So instead I started thinking “cushion.” 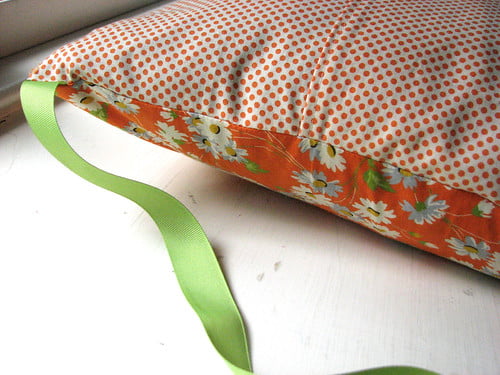 Eamonn and I picked up a handful of throw pillows from the family room and headed out to the driveway to see which ones felt the most agreeable when placed between the car’s seat and my, er, seat.  I settled on a nice feather-filled pillow that had been a hand-me-down from my in-laws (along with the couch they passed along to us, and about 100 other throw-pillows) .

I probably could have just left the pillow in the car as-is, but frankly that wouldn’t have satisfied my need to “make it mine,” nor would it have given me an excuse to further put off any manner of housework that needs doing.  So…

I made a cover for it. 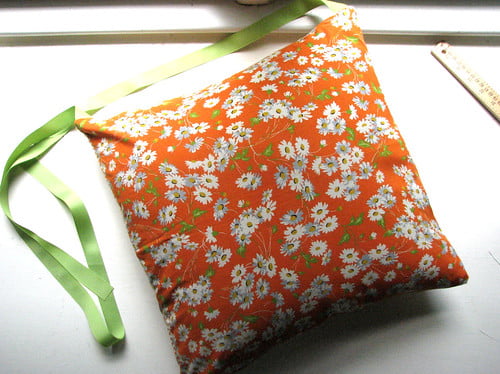 I used stash fabrics, both of which were from some American Jane collection or another, and some grosgrain ribbon.  The ribbons were a great idea from Julie, who mentioned as a comment on my facebook status, that ties would be handy for securing the cushion to the car seat.  Good thinking!

The pillow case itself is an envelope style, very simple to stitch.  It’s a technique I picked up last year from Quick & Easy Slipcovers.  The whole thing took me less than 30 minutes, including the time it took to bring it outside, tie it in place, and declare it fit for duty. 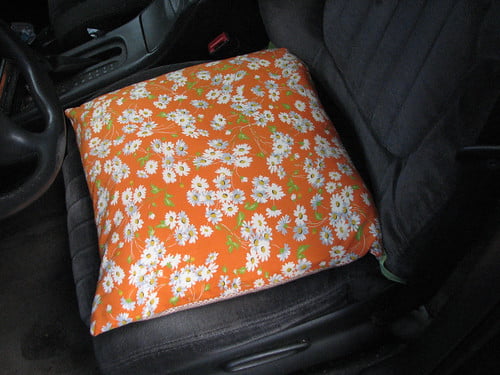 Sometime down the road (both literally and figuratively), after I’ve sat in it for five hours, I’ll let you know if it made any difference whatsoever to the plight of my posterior!