Last night I learned that it takes roughly two hours to unpack a few dozen boxes, organize the contents, and update my website with restocked items. 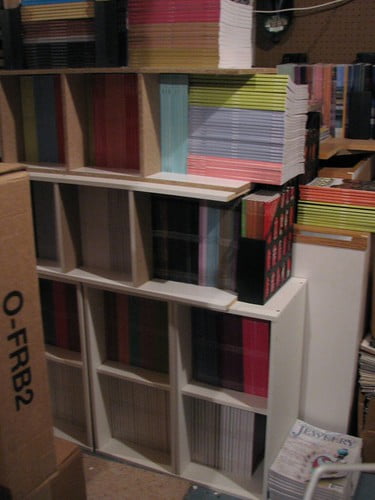 I discovered this morning that if you have on the floor 18 piles of magazines sorted by title, it will take another two hours to make space for them on the shelves and put them away. 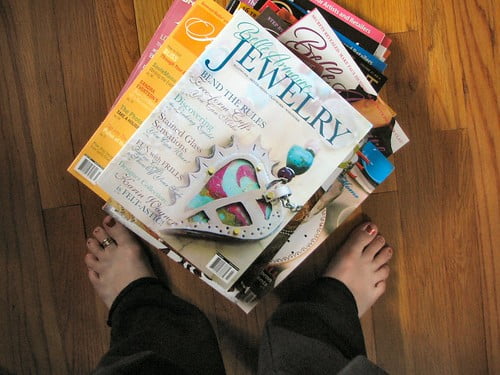 Later, I learned that scanning in the covers of the 25 brand new issues, saving those scans in three different sizes, and uploading them to your store’s server takes about ninety minutes. That ninety minutes includes the time it takes to hear the beep-beep of the Kindergarten bus outside, say to yourself, Oh, shoot! I forgot there was a half day today! abandon your scanning, tear down the stairs and out the front door in your bare feet, apologize to the bus driver for not being in your usual spot, waiting for his arrival, and collect your son who’s been waiting patiently on the steps of the bus for you. Oops.

I also learned that it takes just over an hour to update the website to include those 25 brand spankin’ new magazine issues. That’s a grand total of 6 and a half hours, during which I realized a few tangential things:

This week only, buy three Stampington & Co. magazine issues, get a free copy of one of these magazines:

Don’t add the free magazine to your order. Mention this blog post in the comments of the shopping cart, and I’ll add it for you.  You can select which issue you’d like, or I can do it for you.  This offer only applies to in-stock issues, and ends Sunday, October 19th.

This is nothing to sneeze at – these are pricey magazines I’m willing to just hand you willy-nilly.  See?  I get positively loopy when I’ve spent 6 hours trying to shove 300 magazine issues into a spot designed to hold 200…

My loss of marbles is your gain 😉