Earlier in the week I made that Simplicity 3835 I posted about in my Reasons to be Cheerful, and having 2/3 of a perfectly good vintage white sheet left, I got brave and tackled the pattern that has been languishing since I bought it a few months ago. 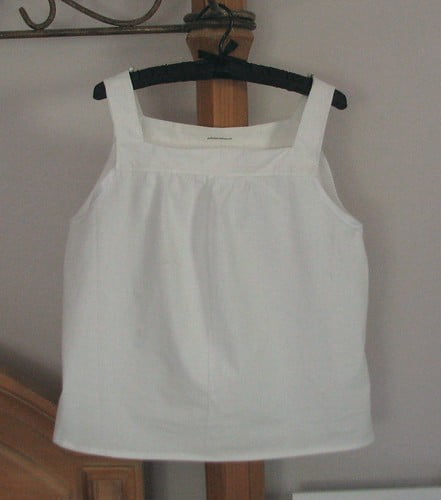 Introducing my first attempt at Simplicity 4589. I bought this pattern back in May, pulled it eagerly out of the envelope, read the instructions, and promptly shoved it in a bin never to be seen again. Have I mentioned I hate patterns? They scare me. They come across as utterly complicated and confusing. They require me to know how to do things like make gathers or use bias tape and interfacing. This particular pattern included all of those things and I was too overwhelmed to work it all out.

Well, last week, I saw Beki’s version of that top and really wanted to make one myself. I fished the instructions out of the bin and realized that in the last two months I have actually already gotten some experience with bias tape, gathers, and interfacing. All that was left to overcome was the confusing directions, and with my kids out of the house every morning this week (and therefore not interrupting me), that would be easier.

Because I chose a size based on my fullest measurement, the finished result was much wider than it needed to be, and shorter than I like. I played around with the side seams and made it fit me better that way, but it still had it’s problems.

I still had more of that white sheet left, so I decided to try again from scratch. 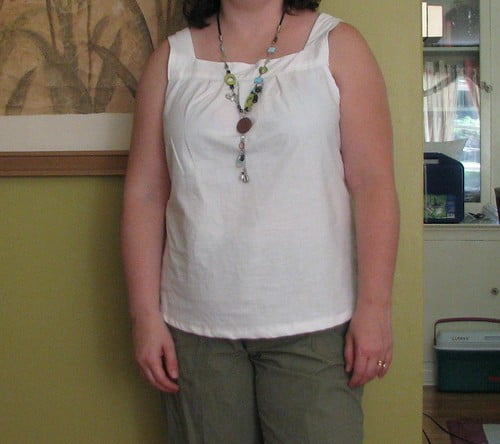 I’m much happier with Take Two. I went down two sizes and then adjusted my pattern from there to take my curves into account. I also added a few inches of length. Plus, I emailed Beki and took her suggestion to add darts to the back. It looks a lot better from the front this way, but the back view is really wonky – I’m chalking that up to user error. It was my first attempt at darts, and I totally guessed how to do it. (Thanks for your advice yesterday, Beki! It was really helpful.)

Feeling relatively successful, I decided that I might as well go ahead and make the one I’d had in my mind for the last few days. I mean, really, who needs to set aside time for taking showers, washing dishes, and vacuuming when there’s craftiness to be had, right? 😀

Just a warning – you might want to grab your sunglasses before scrolling down to see my third attempt. 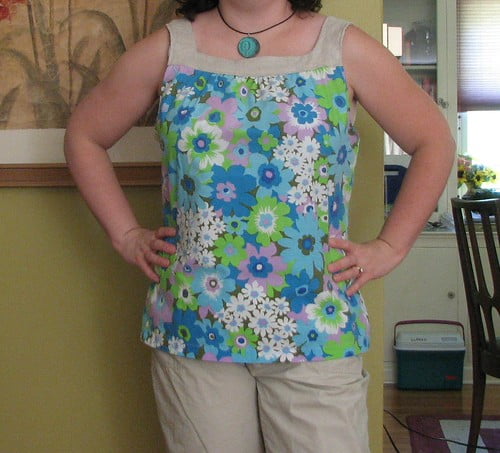 Heh. I warned you. I’m usually more of a solid-color girl when it comes to my shirts, but I just couldn’t get the idea of using a crazy floral with this pattern out of my head. So here it is. I think this qualifies as a crazy floral. It’s one of the sheets from the swap, and it originally came from Arizona.

I left the darts off of this one – the fabric is much more drapey, so it doesn’t feel like it needs them as much as the stiffer white fabric did. I also left the bias tape off of the sleeves, and just did a double-folded hem there. The bottom hem of the shirt is the hem that was originally on the sheet. I like the way the linen looks on top, but I didn’t really like working with it – it’s pretty heavy stuff. This shirt still has some fit issues, but it’s good enough.  Particularly if I walk around with my hands on my hips like this all day, and show the world that there is, indeed, a waistline in there somewhere.  It’s not an accident that I pose like this, you know 😀

I think there may be more of these shirts in my future, and I will work on bettering the fit of those. But not today. I really need to switch off the sewing machine and change my focus for a while. For one thing, there’s some cleaning to do, and for another, I’d kind of like to feed my family something that doesn’t come out of a box (or a drive-thru window) tonight. And then there’s the email to read and the orders to pack. But first, I’m going to take that shower I put off this morning, and when I emerge all clean and smelling of brown sugar, I’m going to put on one of my fun new shirts and enjoy it.