It’s been a long day, exhausting and exhilarating at the same time. Walking, lugging, more walking, more lugging, and even more walking – those were the exhausting parts. But the wonderful conversations with those who dropped by my table at the vendor fair, the opportunity to put faces to so many familiar names of customers and blog readers, and the fact that I was able to swallow my timidity a number of times and just introduce myself to well-known artists that I have admired for years – these things have truly been the best part of this conference for me. Everyone has been utterly approachable, and to my surprise I find than many of them knew me before I introduced myself. I have to admit to finding that pretty cool. 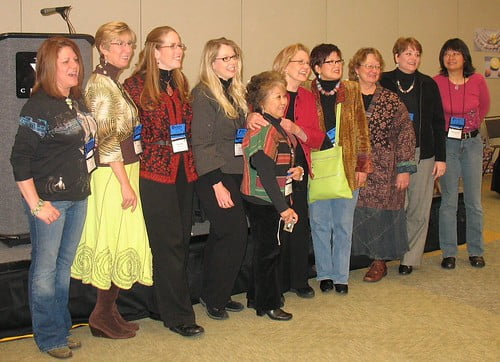 So, I’m afraid I haven’t been taking all that many pictures. It’s enough of a big deal for me to come out of my shell and say hello – asking anyone to pose for photos would just be entirely too much to expect of me

. I did manage to take advantage of a kodak moment of someone else’s creation, and I post it here for those of you reading along at home. This is Carol Duvall, and all of the conference attendees who had ever been on her show. Carol gave an entertaining talk this morning.

I would love to go on and on about the specific seminars I attended, and perhaps I will at a later date. Tonight, though, it’s after 1am, I am utterly worn-out, and tomorrow brings another packed schedule.

Let me leave you with this:  Remember the old saying, “When the cat’s away, the mice do play?” Well, that’s certainly true of the mice I left behind in New Jersey.  Look at what they did: 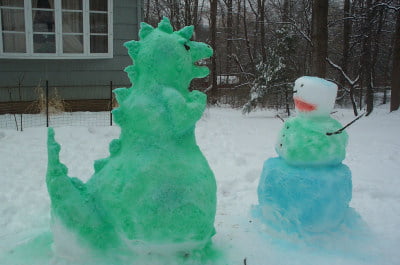 Is that not the coolest thing?? They emailed me a bunch of images with the caption “You’re not the only artist in the family.” Heh. Obviously not. I tell you, it’s great that Neil was home with the boys for this snow day – they’re going to be talking about the time they built monsters in the front yard for years.

It’s too bad I brought all of my clay buttons to the conference with me.  I have a few that would have gone perfectly with the doomed snowman’s outfit.  He could have looked so dapper before being devoured

10 thoughts on “Checking in”