Ok, I made that up. But it’s Thursday, and I wanted to show you what I finished yesterday. [Better grab a cup of coffee – this is a long one!] 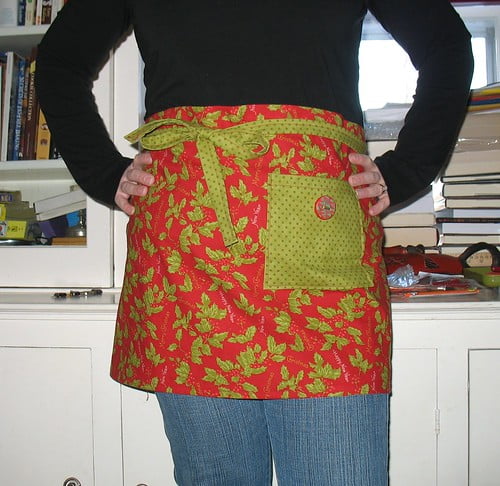 This is the ever-important Christmas apron. Most years, I have good intentions about getting my holiday decorating done nice and early so that I can enjoy a festive December, but the reality is that there are usually still pumpkins on the stoop and gourds on the table well past the middle of the month. Not this year! I still haven’t decorated, but I’ve at least put away all of the fall stuff. And in the kitchen, I’ve got my lovely holiday apron to wear so that I may retire the fall apron I’ve been wearing.

As usual, I’ve based this on the cafe apron in Lotta Jansdotter’s Simple Sewing book. I used prints from the Christmas Past collection by Minick and Simpson, and I topped it off with a Biscotti button of my own making. [By the way, I made an extra one of these buttons, but I haven’t put it in my shop yet – if you’d like to buy it, just drop me a line and I’ll give you an extra $1 off to thank you for saving me the trouble of listing it

. More info about the buttons I make here] 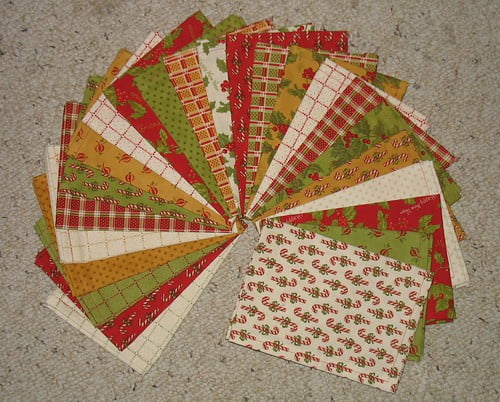 After the apron, I set to work making the matching napkins, also inspired by those in Simple Sewing. Normally I spread napkin-making out over the course of a week or more when I have a 20+ set to make, but I was motivated to put away the fall stuff and so I did all of these in two days. Whew. I may actually make a few more of these. While 23 is a fine number for my family of four – even when I’ve gotten behind on the laundry, our chances of running out are slim – but I’m not sure if it’ll be enough when you add in our celebrations this month. We will have our day-after-Christmas family party as usual, and I haven’t counted heads yet for that. Plus, I’m still deluding myself into thinking I’ll have an open house to sell some of my claythings in a couple of weeks. I’d like to use the napkins for that… Yeah, I think I need a few more. Preferable more red ones and more green ones. I’d like those two colors to be a bit more prevalent than they are.

I also want to make a couple of small table runners for my house out of the scraps, and if there’s anything left after that, I’ve got a gift or two in mind. I have a feeling my sewing machine is going to be smokin’ after I close up the shop on December 16th. It’ll be six days of cranking out all of those fabric gifts that I have been thinking of making, followed by two days of cranking out clay ornaments, followed by a mad dash to Target buying gifts for all of the people I failed to finish making handmade things for

This is a pattern I’m quite familiar with.

Oh! Speaking of gift-giving, I thought I’d pass along something for those of you who have young ones on your shopping lists.

If there is anything I’ve gotten out of the last six months of regular blogging (both reading and writing) it is a heightened appreciation for the small learning opportunities that exist every day. [Well, that, and an insane creative kick that has me making and showing and telling at every turn, but that’s neither here nor there right now.] I’m trying to spend more time indulging the boys’ natural curiosity, and less time imploring them to “hurry up and get in the house.” This morning, for instance, despite the 20-degree temperature, we paused on the way to the bus stop to look at tracks in the snow and try to figure out what made them. And on the way back, after the big one was safely en route to school, the little one and I stopped to inspect icicles. And it was my idea, no less. Let me tell you, I was freezing my butt off, but just the same, I snapped a small icicle off the side of the house, and showed it to him, letting him hold it and explaining how it was made. When he asked if he could wear my glove and see how it felt through the glove, I let him. We spent a couple of minutes looking at the ice, touching it, talking about it. And I have to say, despite how cold it was, I really was glad to have done it. It beat my usual routine of holding the front door open impatiently saying “come on, we’re letting all the warm air out!” while he dilly-dallied about.

Anyway, what does this have to do with gift-giving? Well, being in this frame of mind, and being that I am tired of stepping over crappy broken plastic toys that nobody even plays with, I am making an effort to look for Christmas gifts that encourage their natural curiosity and imaginative play. These boys are chock full of imagination, and I think it’s probably my job to help them keep that going, rather than be impatient with it, yes? For the last several months, when thinking about gifts, I keep going back to a post by Amy Karol of Angry Chicken, where she gives several resources for toys that fit the bill. And yesterday I bought a couple of things from Willow Tree Toys. They have a great Under $10 Stocking Stuffers category, which is where I did most of my shopping, and I came away with a couple of compasses, a bird call, and a magnifying glass. All of those things will set us up for some outdoor adventures. 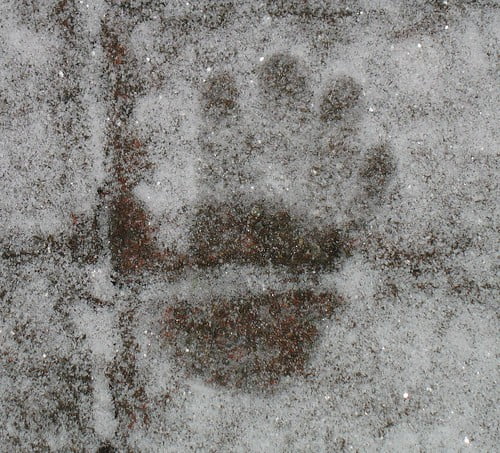 Let me tell you, this is a big step for me. I would prefer to spend the entire winter – and I mean the entire winter – curled up next to a fire and under a blanket, than anywhere near the great outdoors. But that’s not really fair to the kids, is it? I’m seeing from Soule Mama and Blue Yonder and Vintage Chica and so many others, that there is a lot to be appreciated and learned just by following a child’s natural curiosity. And it’s not that I didn’t know it before, it’s just that seeing it documented in beautiful photography on their blogs, alternately makes me feel like a lousy mother, and inspires me. Right now I’m going with the “inspires me” feeling because I know I’m not a lousy mother. But I also know that sometimes I need to put down the laptop and go outside to make handprints in the freezing snow, no matter how attractive the warmth of the couch might be.