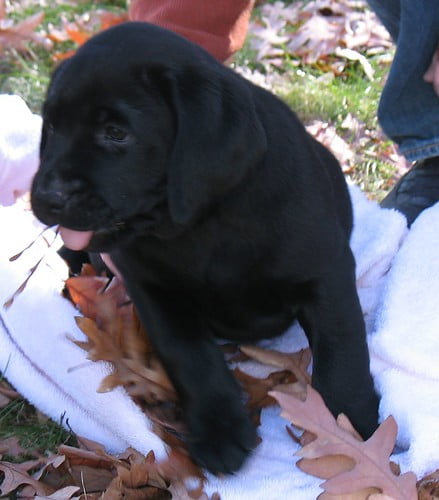 We had a surprise visit today from Neil’s brother & his wife (the ones who had the party last week). They had just been to pick up the newest member of their family and were bringing her home for the first time. Isn’t she a cutie? I’m not really a dog person, but she had me all baby-talky and gushy while she was here. And I have to admit, for much of the day I was thinking that maybe having a dog wouldn’t be that bad… Possibly even Good. 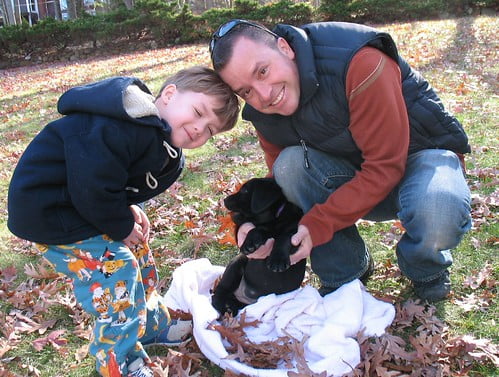 Eamonn was completely smitten. [And yes, he is still in his handmade Halloween pajamas at noon. In December. I’ve never claimed to be mother of the year

] He hugged & kissed the puppy and whispered squeaky little sweetnesses to her, while his brother cowered several feet away. Aidan has always been afraid of dogs, and while we did get him to come outside, he preferred his introduction to be from afar. Neil and I couldn’t resist teasing him for the rest of the day with the idea that his Christmas present will be a puppy. Heh. He would hate that. [See my earlier comment regarding mother of the year… apparently Neil isn’t winning any awards either.]

I do actually think that a dog is just what my shy little 7-year-old needs. I was afraid of pups myself when I was young, but my family got one when I was his age, and my fears quickly faded. A dog is a wonderful companion when the human children are not being particularly nice to you. I learned that firsthand as a child, and I think it’s something that could easily apply to Aidan. Sadly for him, he inherited the social awkwardness of both of his parents. I suspect there will be a dog in this home someday, but before that can happen, Neil and I will have to agree on a breed (I like big, he likes small) and we’ll have to get Aidan acclimated to the idea somewhat. The poor kid would spend a week shaking and whimpering in his room if we were to spring something like that on him. Despite my lack of credentials for mother of the year, there’s certainly enough compassion in me to avoid doing such a thing to my poor, skittish firstborn. 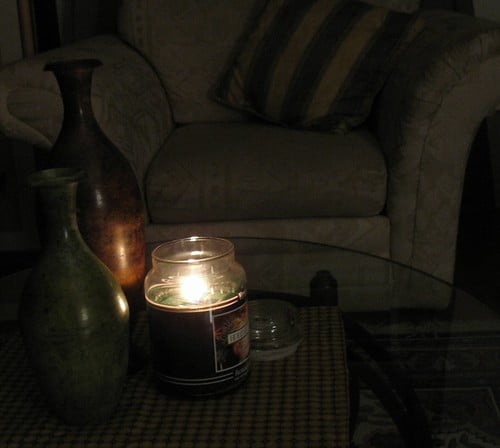 I put away all of the Fall decorations this weekend, although I have yet to do it up Christmas-style around here. I lit a pine candle this evening and put on a little holiday music, though. Nice. Pleasant. Peaceful.