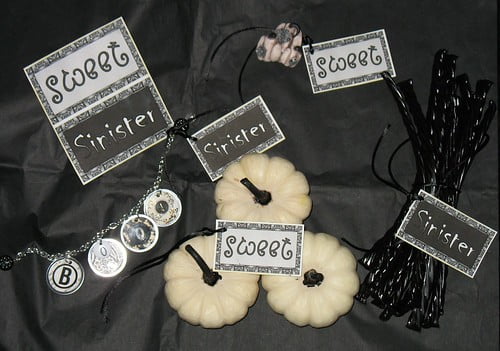 It’s swappin’ time, and there’s nothing like leaving it to the  last minute, eh?  You may recall me mentioning the Sweet & Sinister Swap?  Well, the box is due to be mailed tomorrow.  Want to see what I’m putting in the box to my partner, Ginny?

Now all that remains is to box it all up and put it in the mail.  I hope my partner likes it.  I’ve never done a swap like this, and frankly the more things I see in the flickr group, the more it drives home the point that my crafting style is very different than many of the people in this swap. 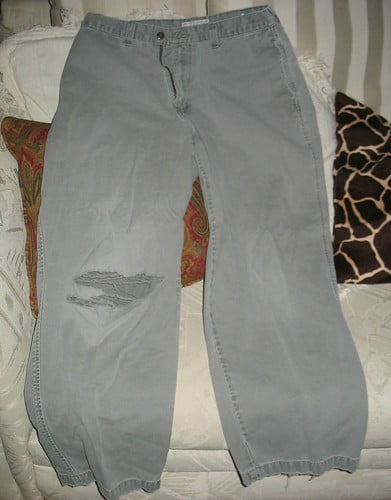 Lacking an appropriate segue, I’m going to just jump into showing you my husband‘s pants.  This are very soft, very nicely-worn-in Wranglers that just happen to have a gaping hole in the knee.  Or, at least, they were.  This morning, after mulling over Eren’s skirt at This Vintage Chica, I took a seam ripper and a pair of scissors to Neil’s pants and repurposed them into this:

Because everybody knows I need another homemade skirt.

It looks crooked, but that’s just the way I am standing.  This is quite possibly the softest skirt I have ever worn.  Neil broke it in for me over several years, and I think tonight after he dozes off, I may sneak into his closet and look for more pants I can steal recycle.  Heh.

You may also have noticed that I got sucked in by the new Old Navy sweater commercial.  Two nights ago, I was sitting on the couch with Neil watching TV and saying, “I like that sweater with the big pom-poms on it.”  One evening later, I’m out renting The Ant Bully for Movie Night, and somehow I end up trying on sweaters and buying my first ever cup of $3.75 coffee (Oh, Decaf Tall Pumpkin Spice Latte. I think I love you.  Call me.)  The newly-crisp Fall air does something weird to me, but in a good, happy kind of way

I’m going to be so busy this week, it isn’t even funny.  A little bird has told me that the long-awaited Millefiori Story is going to be in my hot little hands very very soon.  And that means I am going to be very very busy packing up those suckers and sending them on their way to eager clayheads everywhere.

14 thoughts on “Swapping and Sewing”