It’s five days before Christmas, and I probably should be shopping or wrapping, or something like that, but instead I’m writing this show-and-tell post. Because that’s just how I roll. Ask me in a couple of days how that’s working out for me 🎄 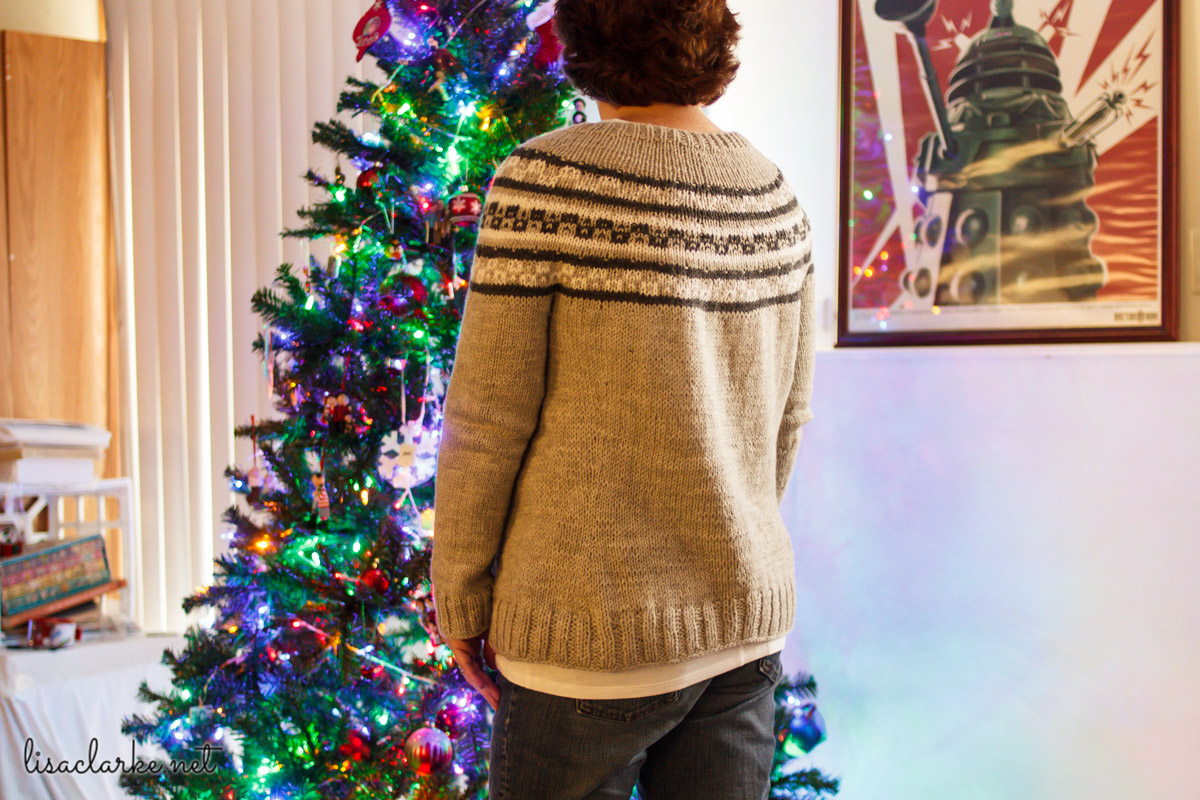 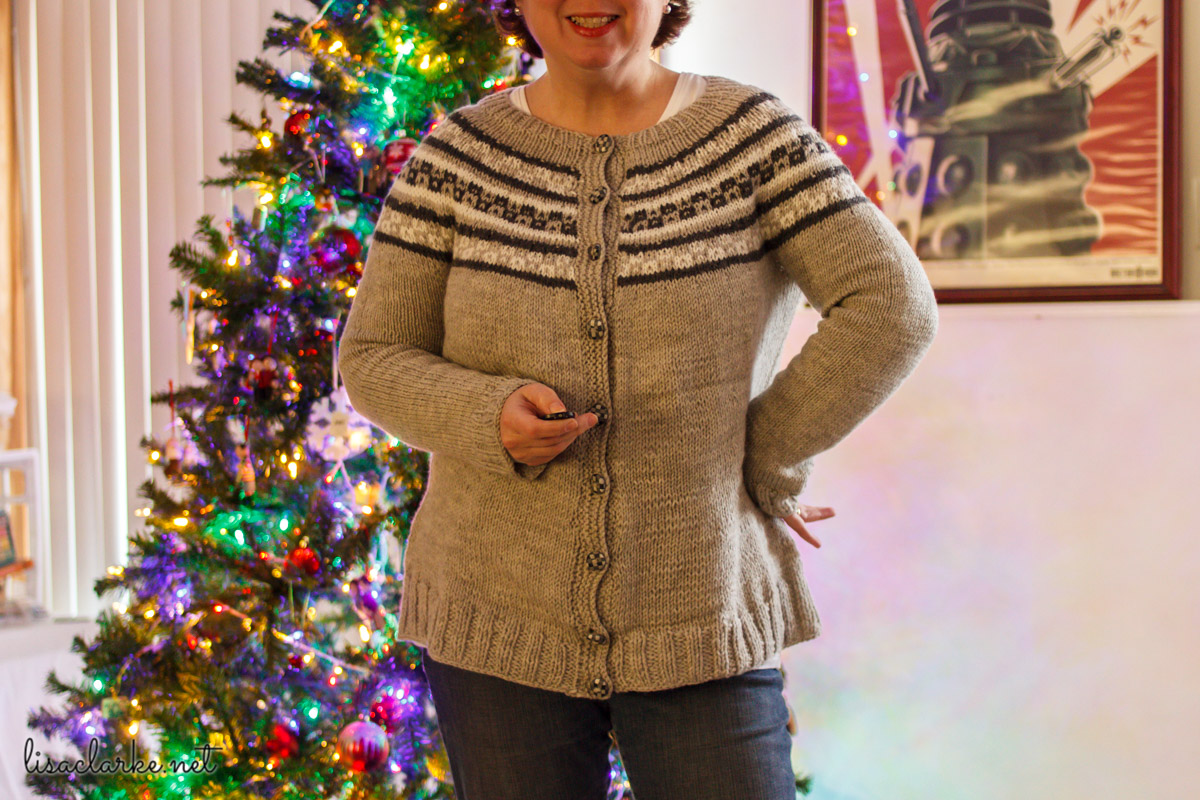 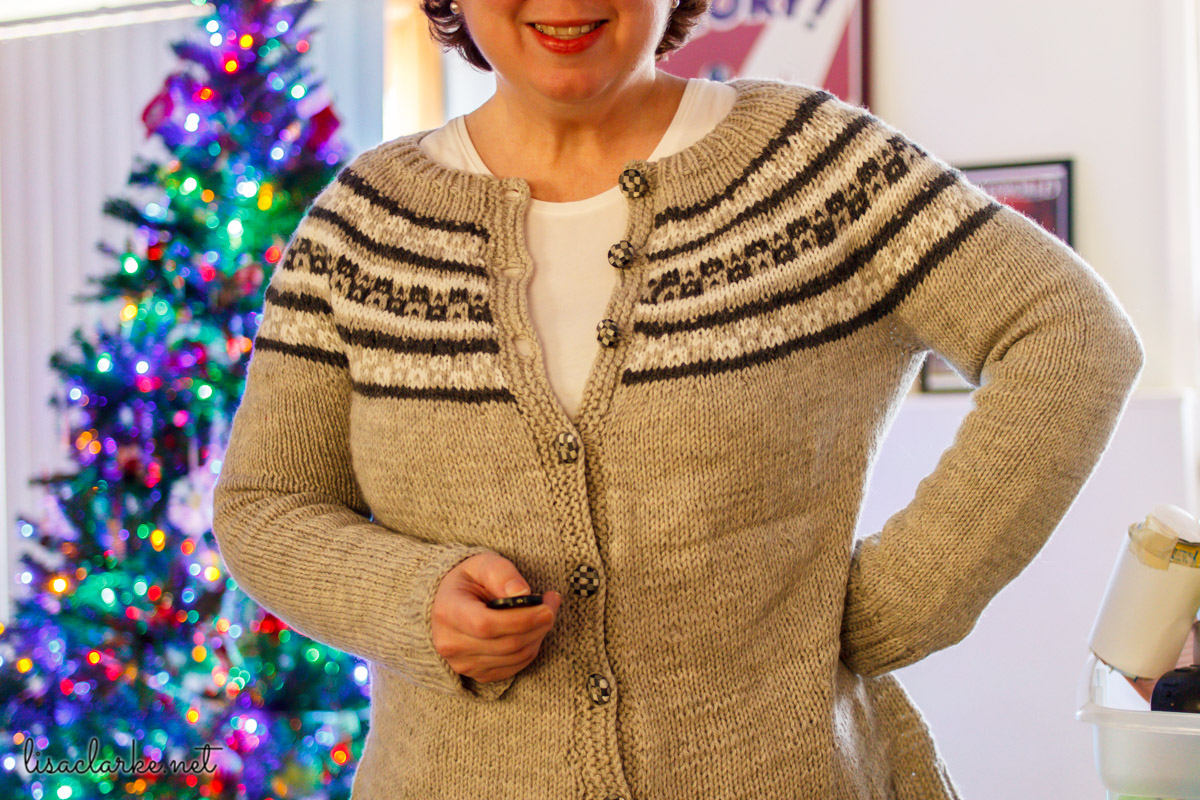 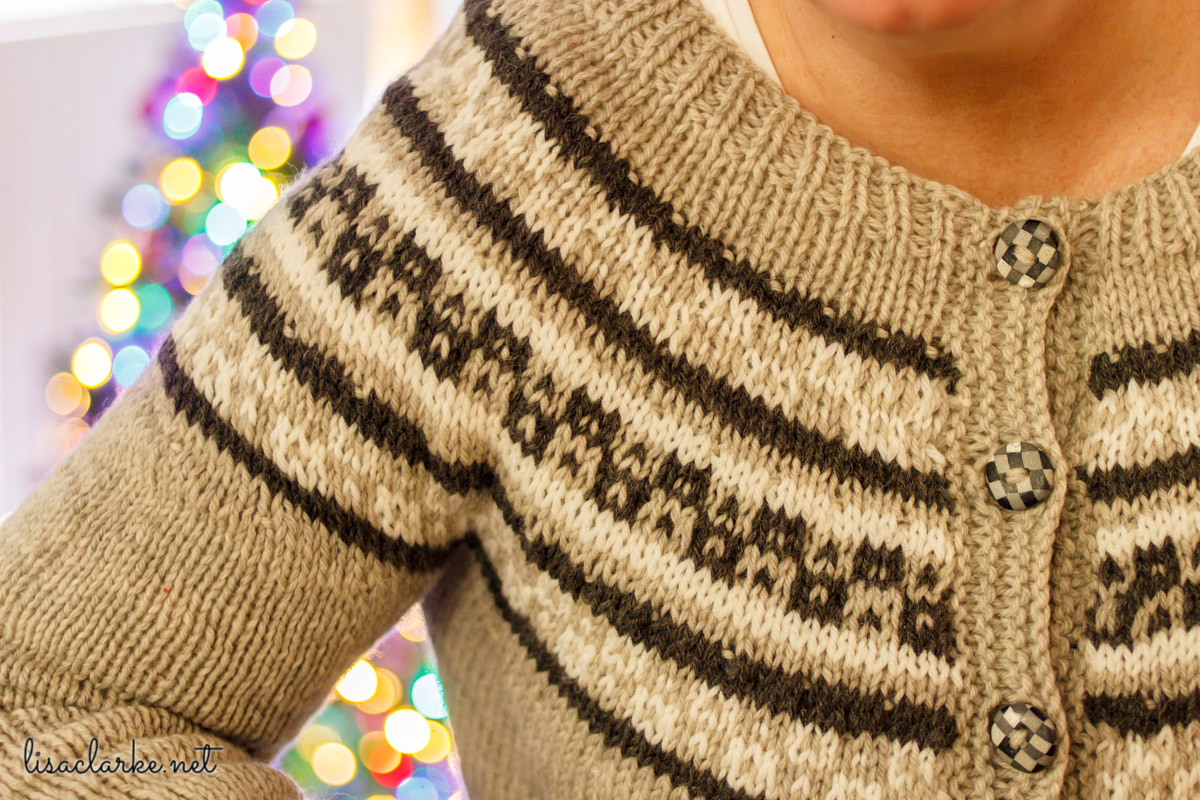 It’s an improvised top-down cardigan with stranded colorwork yoke, but that’s kind of a mouthful, so how about we call it “3 Shades of Gray?”

The inspiration for this knit came from two places:

I have a nice pile of sweaters by now (as you can probably imagine) in a plethora of green shades (and one orange anomaly), and they have served me well. This season, though, I’ve found myself unhappy with my choices. I keep wishing I had something gray!

In addition, my foray into slip-stitch colorwork, and my Rhinebeck meeting with Mary Jane Mucklestone (who said, looking at my slip-stitched Rainbow Pullover, “if you can do that, you can do stranded colorwork.”) prompted me to give Fair Isle a try.

Strictly speaking, Fair Isle knitting is done in the round, and since this is a cardigan knit back-and-forth, it’s really just a more generic type of stranded colorwork. But it did teach me what I need to know in order to do the real thing someday. The hardest part, really, is making your fingers do what you want them to do. Holding two yarns at once is something that I found awkward, but I presume it would get easier if I did it often enough to develop some muscle memory.

I’d link you to the pattern I used for this, but one doesn’t actually exist. It’s kind of a mash-up of my Everyday Cardigan and Porthole Pullover, with a yoke design I made up after looking through Mary Jane Mucklestone’s Geo Knits, Lynn Watterson’s The Very Easy Guide to Fair Isle Knitting, and a couple of websites I no longer remember.

I’m so happy with this. I would like to attempt another one at some point, but I do need to work out some adjustments to the stitch counts. This one is a little bit tight across the upper back, and I need to figure out how to add more room there without throwing off the rest of the fit.

It’s possible I’ll tweak this and publish it, if there’s interest. I’m more likely to publish it if I do it as a pullover, though. (Why? I have my reasons, but they’re boring and unimportant 😜)

Next up on my needles, I’d like to do some more selfish knitting, if I find a gift card for a yarn shop in my stocking this year… I’m dying to make a Stopover!

Oh! I almost forgot to tell you about the buttons. Silly me!

I made the buttons out of polymer clay. For those of you who speak polymer, here’s how I made the gray square cane I used: I made a skinner blended tube from black to white, and then extruded the tube through a square die. I cut the extrusion into 4 pieces, stacked them, reduced the cane a bit, and then cut that into 4 pieces and re-assembled it. The buttons all feature veneers cut from the face of that cane.

As it turns out, the black and white I used were lacking some of the warmth present in the yarn colors, so after the buttons were baked, I painted them with a wash consisting of beige chalk pastel scrapings and floor polish. That warmed them up just the right amount.

In New Jersey? Place an order before 11pm EST Friday, and pick it up at Maker's Market in Westfield this Saturday! Learn more. Dismiss