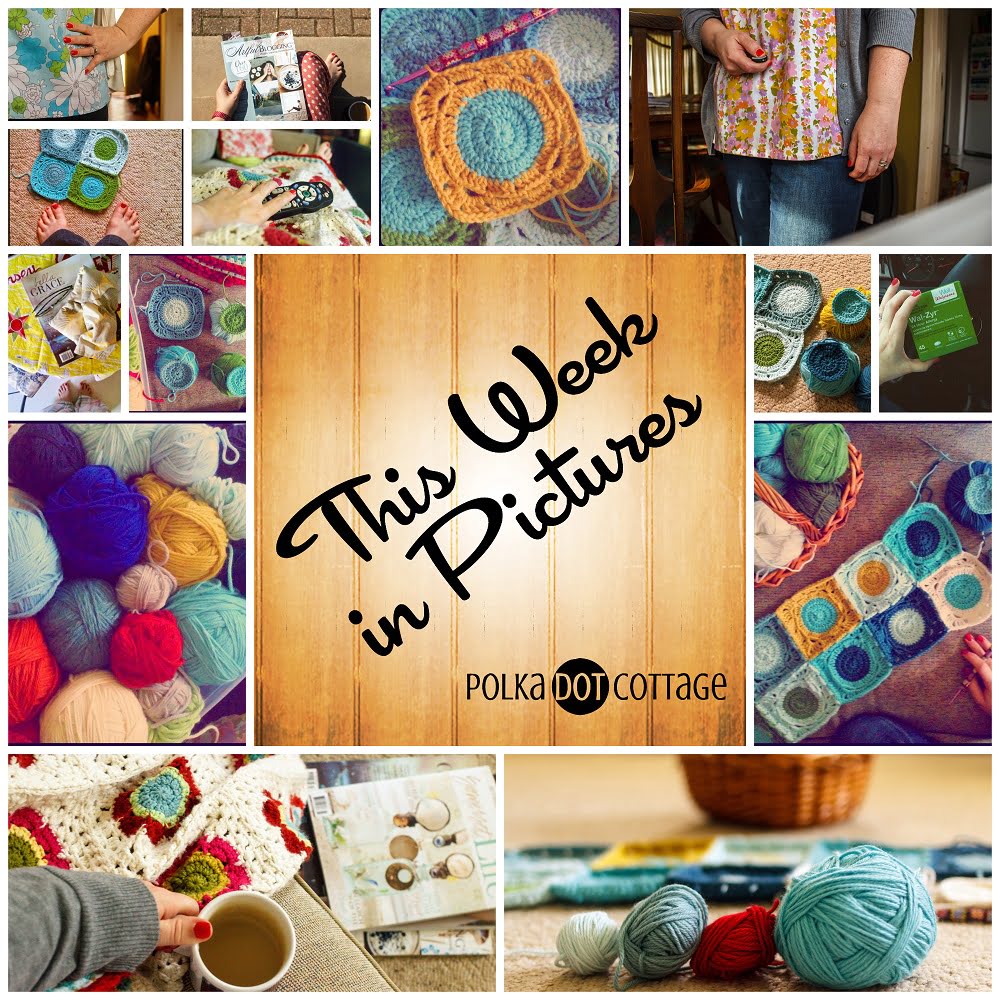 You’ll notice there’s a lot of yarn in this week’s mosaic.

I’ve found myself unexpectedly hanging out on the couch a lot. It started on Sunday with about a million sneezes that at first were just mildly annoying, but as the day went on, became the worst. congestion. ever.

I thought maybe I’d developed allergies for the first time in my life, but by Monday it was clear that I just had a cold. It was one of those intense colds that flare up fast, make you feverish and miserable for a day and half, and then peter out quickly. In fact, I probably would have been off the couch and back to my usual routine by Tuesday afternoon, if not for my lower back.

I’m not even sure what I did to it, but something got pulled out-of-whack that Tuesday and made it nearly impossible for me to move. It was really terrible. I wanted to cry every time I had to change position.

Happily things have improved since that day, but I still am impaired. It’s Friday night as I write this, and I still can’t drive, do laundry, or basically be useful in any way that requires my torso to twist. It’s annoying, to say the least.

One silver lining, though, is that I decided midway through the week that I needed to do something productive with my time. I managed to hobble down to the basement and get the Berroco Vintage tub from my yarn stash. I pawed through it for a while, mulling over ideas and options. Before too long I had decided: new blanket for the family room!

The four lap blankets I crocheted for each of us were meant to live in the family room together, and for a while they did. But then Eamonn decided he wanted his upstairs in his room all the time, and Neil often uses his at the end of our bed to keep his feet warm in the winter. We’re down to two blankets full time in the family room, and frankly, I don’t want to share mine! That’s one of the reasons I made everyone his own, you know?

Anyway, I miss all of the family blankets living in the family room, particularly Eamonn’s, which I made in colors specifically to match the decor in there. So I’ve decided to crochet a new one. It won’t belong to any of us in particular. It will just live in that room to be used by anyone who wants to use it. I may make it a bit bigger than the other lap blankets so that two (or more) of us can use it at a time.

I’m using the square I designed for my niece’s stroller blanket, and changing up the way I do the colors. It’s been fun so far! I’ve had a goal of four squares per day while I’ve been stuck on the couch, and that has been just the right amount, I think.

My goal for this weekend: more freedom of movement in my back muscles, and eight more blanket squares 🙂 Wish me luck!

It’s a roundup of the photos I shot for my Project 365 (one image each day for all of 2015), plus some everyday-life snapshots I posted on Instagram during the previous week.
Ready? Cast your mind back to this time last week… 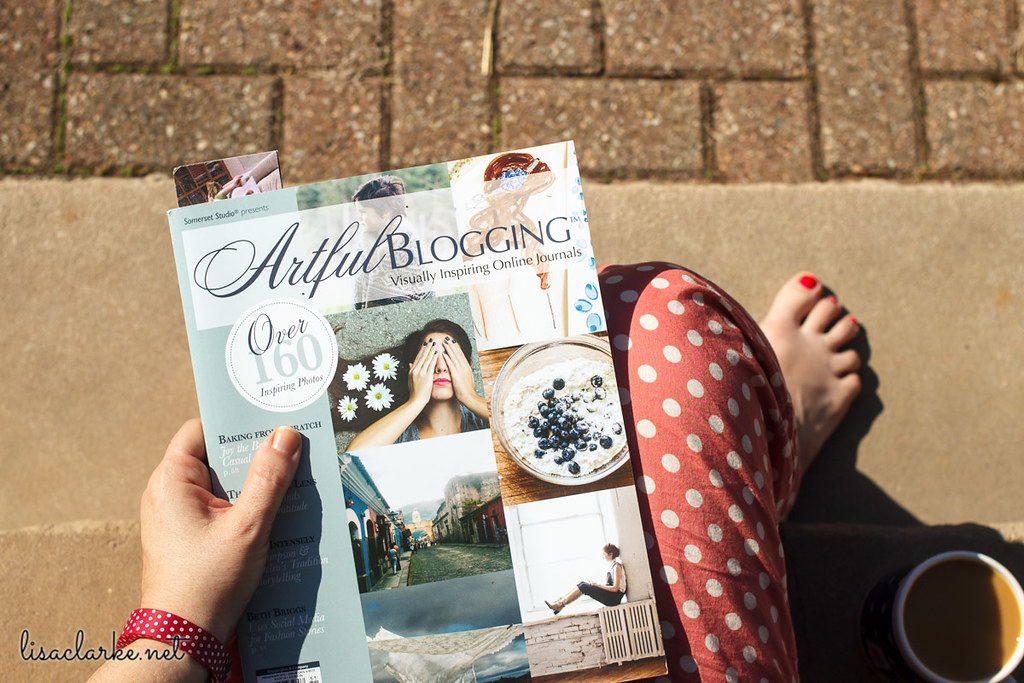 365: 2015 108/365 – What a gorgeous morning! I’d have spent all of it sitting on the front steps with my magazine if I wasn’t so picky about having a little back support. Half an hour was my limit. But hey, I’m on my bed next to an open window right now, finishing my coffee and that’s pretty awesome, too. 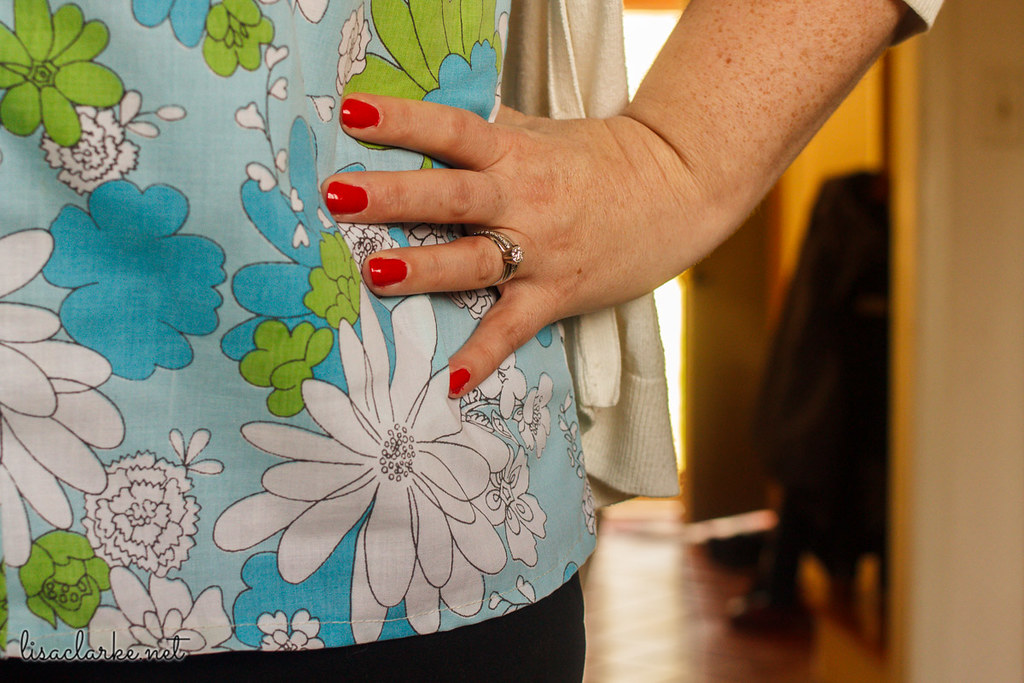 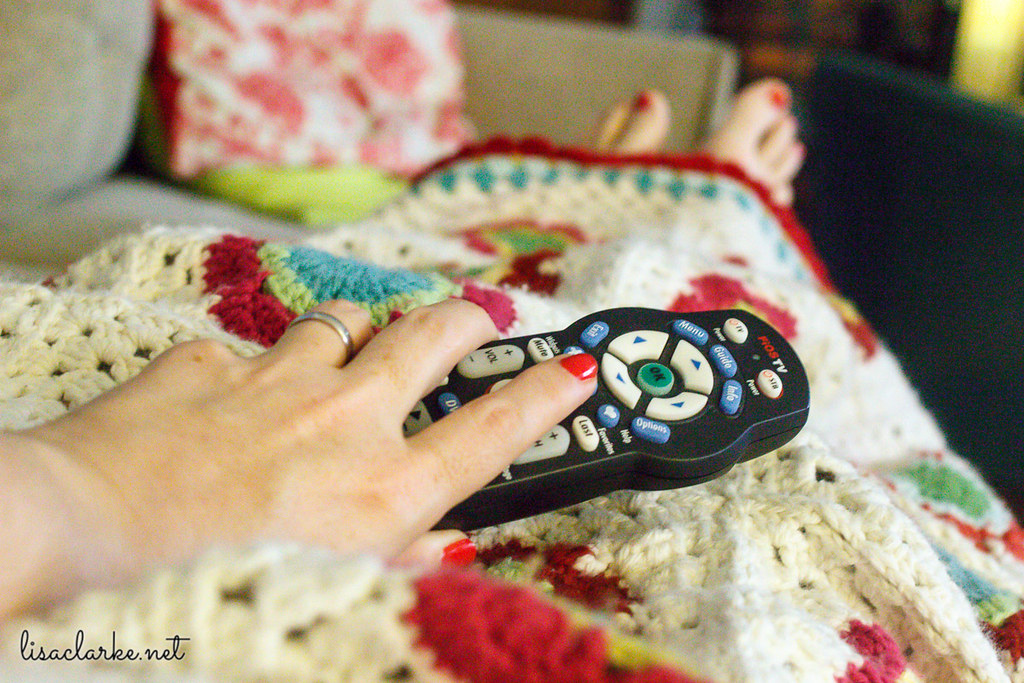 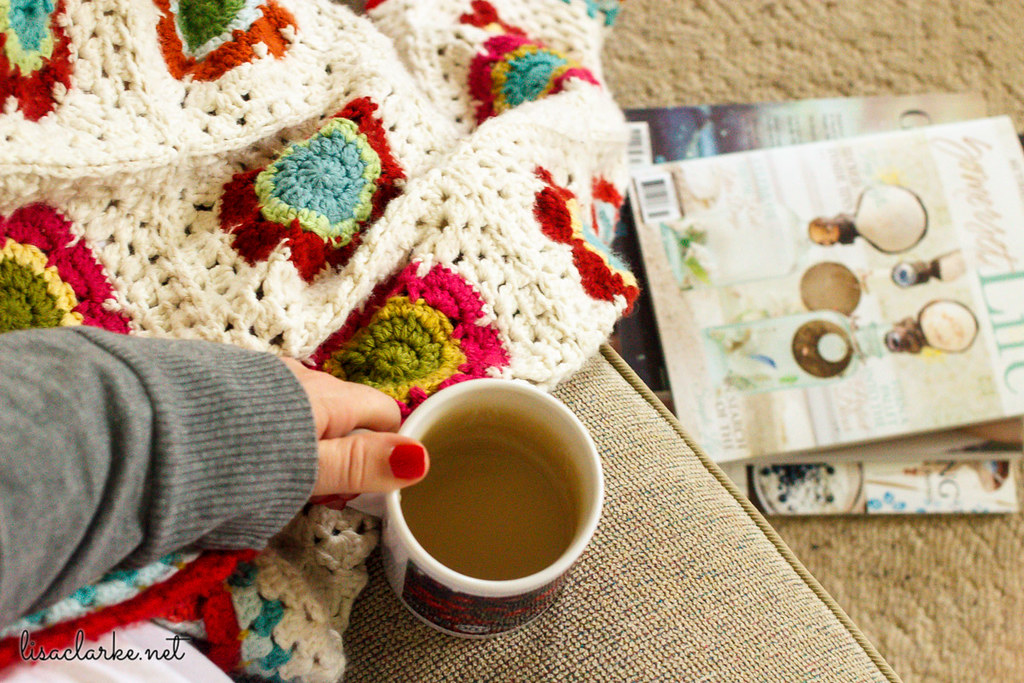 365: 2015 111/365 – I’m still under the weather today. I may have overdosed on bad TV yesterday, so I’m going to flip through some creative magazines while I drink my Earl Gray this morning,

I've had a cold since Sunday, and while I am starting to feel better from that, I have managed to strain my lower back somehow, and now everything I do hurts. Thank goodness for rice pillows to heat up, magazines to read, and a husband to give me a hand getting off of the couch now and then. Fun times. 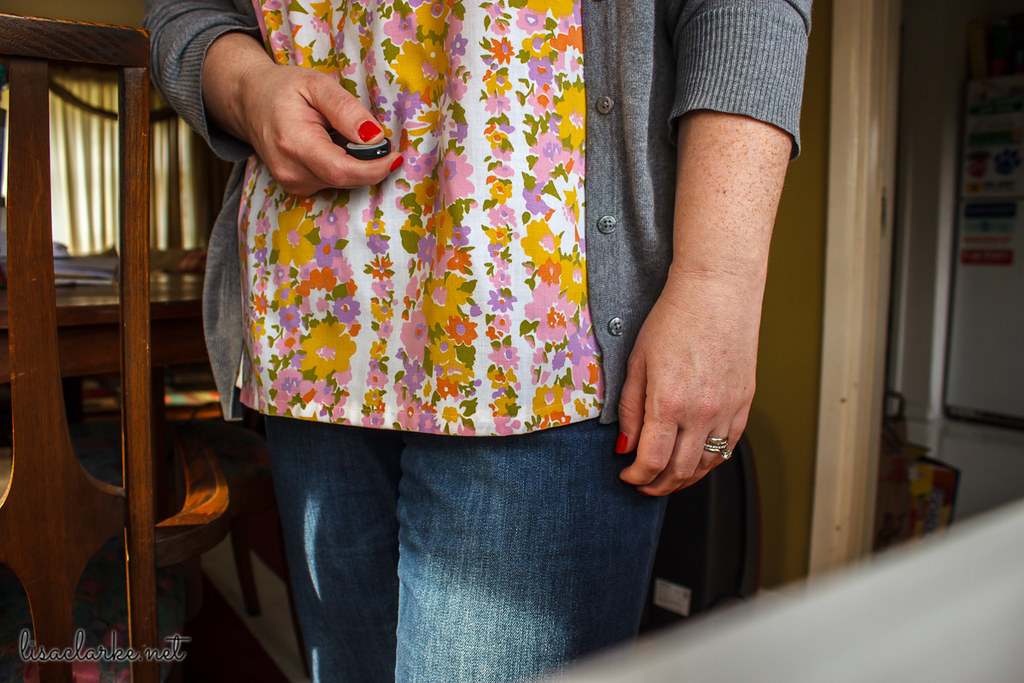 365: 2015 112/365 – My cold is much better, but my lower back is still kind of a disaster. Just the same, I couldn’t face another day in my pajamas. I just HAD to get dressed. I still have to put my feet up all day (which doesn’t thrill me), but on the plus side, all of this inactivity has been great for my manicure: three full days and barely a chip 😉

As long as I'm stuck here on the couch, I might as well do something productive… New blanket, maybe? #crochet

I think I'm going to #crochet a variation of the last blanket I made. This one will be a lap size in blues and greens ☺

Hey, look at that! All I need is 11 more sick days, and I'll have a full blanket 😜 #crochet 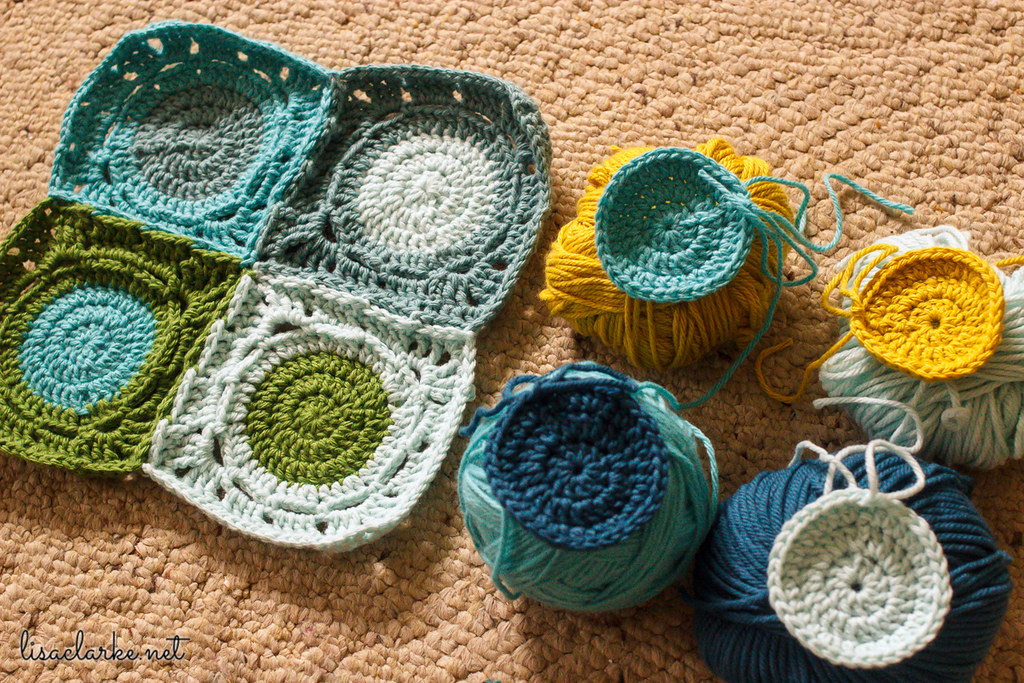 365: 2015 113/365 – So it appears I’m starting another blanket. This one will be a general family room one that we can all share. I may end up making it a little bigger than the personal lap-sized ones I’ve done so far, but we’ll see. Tentative working title: Family Room Squircleghan. 🙂

Mmmmm. I love mustard and aqua together.

Progress! I have a goal of 4 squares per day while I nurse this backache. So far, so good 👍 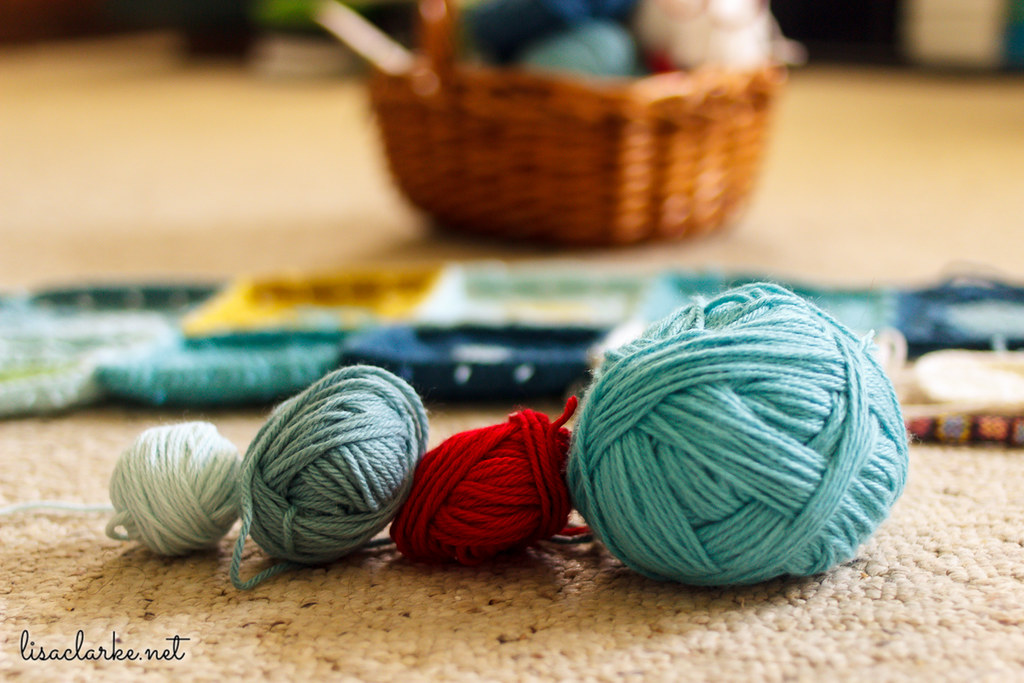 365: 2015 114/365 – I still have one square (out of four) to finish for today’s blanket-crocheting goal, but I can’t resist thinking ahead and picking out colors for the next four squares 🙂

Thanks for taking a peek at this week’s photos! If you want to see this stuff as it happens, please feel free to follow me on Flickr.
I may already have plans to blog about some of these things in greater detail over the coming week, but be sure to leave a comment if there’s something in particular you want to know about!

6 thoughts on “TWiP: Have you any wool?”