This week, particularly the early part, was pretty much dominated by my surgical procedure, but we’ve already talked about that, so no need to discuss it any further here.

In other news of the week, Aidan turned 15 on Thursday (yikes!) and I got a new laptop. This, in fact, is my first blog post from the new computer. So far, so good.

Remember last year when I dumped a cup of coffee into my old computer? Yeah, those were some good times right there. It was like the gift that kept on giving, because that little incident caused my CTRL key to work intermittently, as well as the right-click mouse button on my track pad. And over time, complications from taking the laptop apart to drain it caused the left corner of the screen to come unhinged. Sometimes using that computer could be comedic. And I’ve been doing it for a year.

It got worse when I started using Lightroom to edit my photos. My whole system was brought to its poor little crippled knees.

So replacing the laptop has been on my radar for quite some time, but I’ve been too reluctant to part with what little cash I have. I finally bit the bullet when Neil found me a great deal on eBay this week. It’s been perfect timing, too, because I have spent a lot of time sitting around recently, between my recovery, antibiotics that make me feel blechy, and good ol’ monthly cramps. I’ve had time to copy my important stuff over and poke around Windows 8, too.

Ok. Enough nerd talk from me. All of the aforementioned laying around has not been conducive to hosting a proper birthday party for my teenager, so we’ve been doing the “low-key supper-and-cake” circuit with the grandparents. On Thursday (his actual birthday) we took him out to the local diner, just the four of us. Last night it was Chinese food and ice cream cake at Neil’s parents’ house, and tonight it is sandwiches and brownies at my parents’ house. I’m on the hook to make the brownies this afternoon, which is the least I could do.

Actually, it may very well be the least I could do.

This entire week, as a matter of fact, has been full of me doing the absolute least I could get away with doing. I’m looking forward to getting my act together again. Like, soon. 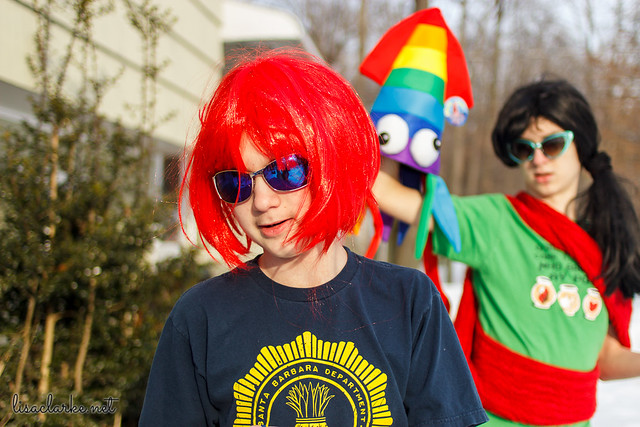 Getting my iv inbefore my procedure. Good times. 365: 2015 55/365 – With this Frappuccino I celebrate: 1) Getting out and about after 2 days in my pajamas. 2) Excellent biopsy results. 3) The soothing feel of a frozen drink on a sore throat. 4) A pink and gray blanket on the hook. 5) An outside temperature above freezing. 6) Starbucks Rewards, which got me my drink for free 🙂

Why, yes, I *do* have Clarkesworld wrapping paper. Doesn't everyone? 😎

The husband stole my phone… 5 thoughts on “TWiP: the least I could do”