I’ve never been willing to pay much for cell phone service. We’ve had pay-as-you-go phones for as long as the concept has existed. $15 flip phones for everyone, and $26/month for service for the four of us, and more minutes than we could possibly use in a lifetime.

I was so thrilled when our pay-as-you-go company introduced Android phones into their lineup last year, and I eagerly jumped on that bandwagon. Unfortunately, the phones they had available were truly bottom-of-the-line, and mine was fraught with minor (and a few major) frustrations.

One of the minor disappointments was the 2 megapixel fixed-focus camera. It was for the birds. I might be able to take a decent picture outdoors on a sunny day, but that was about it.

Happily, the phone company’s Android offerings are much improved now, and I found a shiny new phone under the tree this year. It’s still an inexpensive model, but I’m kinda in love with it. It runs like a dream, and as long as nobody shows me what a top-of-the-line model is like, I won’t even know what I’m missing.

The camera has a whole 5 megapixels, which these days is not particularly impressive, but it’s more than twice what I had, and it has the ability to auto-focus, plus it has a flash, and probably some other features I have yet to explore.

Being able to take phone pictures that aren’t completely terrible has given me a new interest in Instagram. And that’s putting it kind of mildly. I should probably apologize now for the amount of images you are going to have to scroll through this week. And trust me when I tell you, I was actually holding myself back a bit.

I’m trying not to go TOO crazy here. I mean, really. It’s still not the most amazing camera in the world, but I am enjoying the challenge of making it look good.

I saw the snow, I wanted coffee. So here I am 🙂 While water and a breakfast bar may be good for the body, the soul was really hoping for a mug of hot coffee and a warm croissant. Sigh.

This afternoon, a walk alongside the woods. 365: 2015 4/365 – My new LG Tracfone. It’s cheap, but it’s running Android, it’s got a 5mp camera, and it hasn’t crashed on me once in the week and a half I’ve had it. (By this time last year, my first Android Tracfone had already blown up on me several times.) Hooray for cheap smartphones that don’t feel cheap! P.S. My last phone had a fixed-focus 2mp camera, so this one feels like a dream in comparison – I can’t seem to stay off of instagram…

My favorite time for this is Sunday night, when there are guitars and drums and young people and energy 🙂 Started the day off right with a good workout at the Y. Back home now and settling in to start my work day with a nice hot cup of coffee. It's cold and windy out there today.

It's a nice night for knitting on the bed and watching a British mystery. I've had a bedroom makeover on the agenda for YEARS, but progress has been really slow until recently. Today I rearranged some furniture, and decluttered everything that was piled on top of the desk. Eventually (once I figure out what to do with all the stuff that's in it) the desk will get out of here altogether.

It is so so cold outside that I am actually looking forward to working up a sweat here.

I was working on a small blanket a while ago but I am going to scrap it and start over, I think. This will be square number one. #crochet 365: 2015 7/365 – Neil gave me these lights for Christmas, and I’m getting to use them tonight. I’m still playing around with the best way to set them up for the most natural-looking light, but this worked pretty well for a first try. 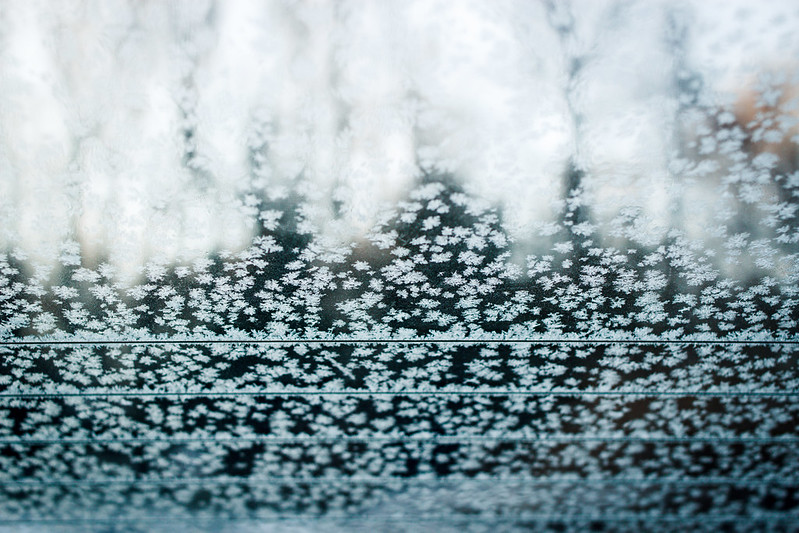 I ducked in here to flip through my new library book (I don't particularly want to read it but I kinda think I need to, you know?) but I've already finished my croissant and have yet to crack the book. I fell down the Instagram rabbit hole instead. Oops.

I thought I ought to warn the others. Thanks for taking a peek at this week’s photos! If you want to see this stuff as it happens, please feel free to follow me on Flickr. (Or Instagram, too!)