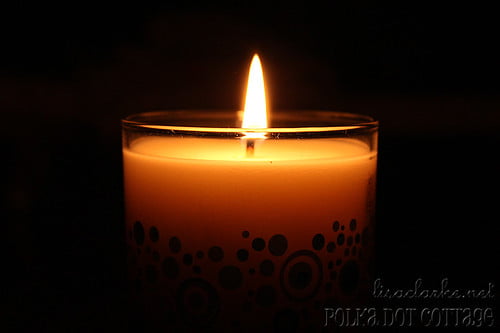 The evenings are getting cooler.  It’s not really cold enough to get a fire going in the fireplace, but I find that lighting a candle or two gives off some of that same cozy feeling without emitting more heat than we’re ready for.

So, I guess it was perfect timing, and I was ripe for the asking, when Crash Candles approached me and asked if I would be kind enough to review one of their new Angela Adams Soy Candles.

I tend to be picky about what I will review, and I nearly always send PR pitches to Spam, but like I said, my resistance was weakened by the increasing pervasiveness of October weather.

I used to be a candle addict. It’s almost embarrassing the number of jar candles from a particularly well-known company I have taking up space in my linen closet.  I don’t use them very often anymore, though.  Initially I slowed down because they had a tendency to leave the walls sooty, and I really don’t enjoy painting.  But more recently I started thinking about those sooty walls and wondering what that meant for our lungs.  It really put me off.

Those old jar candles are made of paraffin wax, which is a petroleum-based product.  So not only does the sooty smoke likely contain carcinogens, the wax itself is made from a non-renewable resource.  When I read that Crash Candles are soy-based and made with natural fragrances, I decided to give one a try.  If I liked it, maybe I would feel better about burning candles once again.  Soy wax is all natural and renewable.  As far as any health claims against paraffin and for soy, I’ve been all over the internet, and while the general consensus is that soy is the better choice, you will also find arguments claiming the opposite.  I’m no expert, so I’ll just leave it to you to make up your own mind. 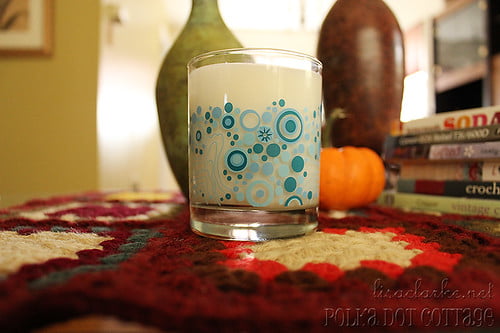 My particular candle is #406, Sea Fantasy, in the “Sea Grass” scent.  It is a lovely, clean aroma, although not entirely appropriate for this time of year.  I’d rather be surrounded by more spicy, harvest-y smells right now, but I can definitely see myself enjoying Sea Grass in the winter, spring, and summer months.  The candle is quite strongly-scented, leading me to believe that if I leave it opened in my linen closet while not in use, my towels and sheets will come out smelling fresh and lovely. That’s a plus to me, since the natural laundry detergents I use tend to disappoint me, when it comes to fragrance.

In fact, as I write this review, I am smelling the unlit candle quite clearly from across the room.  While I am pretty sure that will soon prove to be overwhelming to my nose, this will  definitely be good news for my towels and sheets once I put the candle away.

I burned the candle for several hours last night before the scent became too much for me.  It was a good run.  I actually expected to tire of it more quickly than I did.  Other scented candles tend to give me a headache after a few hours, but I didn’t have that experience this time.

The jar itself is decorated with original art by Angela Adams.  It is one in a series of eight designs and fragrances, and is meant to be re-used once the candle has burned out. In addition to Angela Adams, I see there is also a line of candles from Lotta Jansdotter, whose aesthetic I really love. 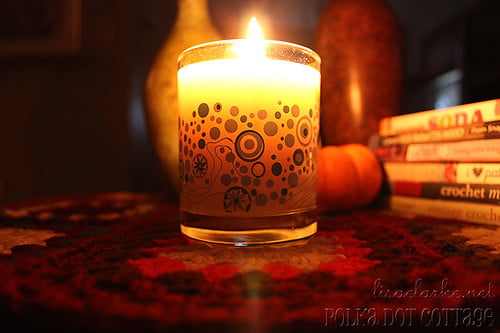 Bottom line, the candle I received was in a lovely jar, and was strongly-scented with a fresh, clean aroma.  I like the fact that it was made with eco-friendly wax and fragrance, and I am considering buying another one with a more October-ish scent so that I can enjoy it fully right this very minute.  I think these would make nice Christmas gifts, too.

Full disclosure: I received one candle for free from Crash Candles in exchange for this review, but that is the only compensation I was given, and this is my 100% honest opinion.

You can get a lot more information (and an opportunity to purchase) on the Crash Candles website.  They are also available at Amazon (where I can get a small commission if you use this affiliate link – thanks!).